The cisco is a fish in demand: Its meat graces Passover tables as gefilte fish, and its eggs are a delicacy in Scandinavia. Commercial fishing operations on Lake Superior’s North Shore depend on it, netting hundreds of thousands of pounds of the silvery, foot-long fish from the lake each year.

But there are signs that the cisco, also known as lake herring, may also be a fish in peril.

At 5 a.m. on a November morning at the Grand Marais, Minn., harbor, fisherman Eric Brisson and his assistant, Shaun Linnell, suited up head to toe in waterproof rubber gear.

As the temperature hovered around 18 degrees, they hopped onto their 22-foot steel boat, painted green and stacked with empty plastic fish boxes, and braced themselves.

“The first initial go is kind of cold,” said Brisson. “Once you’re on the lake and get moving, it’s not so bad.”

They start the boat under a star-speckled sky, and motor 2 miles northeast of the Grand Marais harbor to check the nets they set the day before. Braving the frigid weather and early mornings on Lake Superior is a daily ritual for Brisson. From 9 to 5, he’s an appliance repairman, but early mornings are reserved for catching cisco.

The fish spend most of the year in deep water, miles from the lake’s edge. But each fall, cisco move closer to shore to spawn and lay eggs in the rocky shallows. Those eggs — cisco roe — can fetch a high price for Brisson and Linnell. And that grouping in the shallows that allows the fishermen to gather the spawning cisco en masse.

Late fall can be lucrative for commercial fishing operations like the one Brisson runs. Some years, more cisco are pulled out of Superior in November than in the rest of the year combined.

But for Brisson, fishing is more than a job.

A fish in demand

“For me, it’s more of a family heritage kind of thing,” he said. He’s a third-generation fisherman who apprenticed with his uncle before getting his own commercial fishing license three years ago. Even though he squeezes fishing in before his day job, Brisson takes pride in carrying on the family tradition and enjoys the thrill of early mornings on the lake.A fish in demand

Cisco are the most valuable commercial targets for the 25 commercial fishing operations based along Minnesota’s North Shore.

Cisco eggs, found by the thousands inside spawning females this time of year, are often called “Lake Superior gold” — for their orange hue and their cost at the grocery store. “They’re quite a delicacy — and similar to caviar,” said Ellen George, a Cornell University biologist who researches the fish.

Most of the eggs are shipped to Scandinavia. In Sweden, they’re served as a delicacy called löjrom. The meat from all those fish doesn’t make it quite so far: Some is sold to local grocery stores and restaurants, and the rest is sent off to be ground into gefilte fish, served at Passover Seders across the country.

But Lake Superior cisco — and those cuisines they serve — could be at risk in a warming climate.

A fish in decline

“The ice protects the eggs as they’re sitting and developing over winter,” said George. “Ice stops these big waves from ripping eggs off of shoals.”

But that crucial ice is disappearing. Since the 1970s, winter ice cover has declined across all of the Great Lakes, including Superior. A NASA study in 2016 found that Lake Superior is one of the fastest-warming lakes in the world. That warming is strongest at the surface of the lake, where ice used to form regularly. 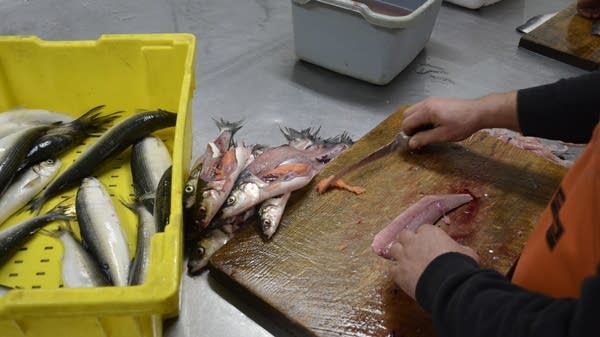 Eric Brisson filets the cisco that he caught earlier in the morning on Lake Superior, removing the eggs from the female fish. Those eggs will be exported to Scandinavia, where they’re considered a delicacy.   Photo: Daniel Ackerman | MPR News

“We’ve gone from a lake that normally froze over almost completely to a lake that seldom freezes over,” said Bob Sterner, the director of the Large Lakes Observatory at the University of Minnesota Duluth.

With less ice cover, cisco eggs developing in the lake bed are exposed to more light and turbulence.

“The wind will push the water around more,” said Sterner, who added that the turbulence could be made worse by stronger storms — another consequence of climate change in the Great Lakes.

And then there’s the variable nature of cisco themselves. “Cisco are already a bit of a boom-bust fish,” said George. Some years, almost no eggs hatch and grow into adults. Those bad hatch years tend to occur when winter ice cover is low, an increasingly common occurrence.

“We could get to a point where there's more bust than booms,” George said, “and that would not be good.”

This isn’t the first time the fishery has faced the possibility of a major bust. Overfishing nearly wiped cisco out of the Great Lakes in the middle of the 20th century. Conservation measures in Lake Superior helped the fish bounce back there in the 1980s and ‘90s.

But cisco numbers are trending downward once again. Minnesota’s Lake Superior cisco harvest has dropped from about 400,000 pounds in 2006 to about 190,000 pounds in 2018. And, while scientists point to ice loss as the likeliest cause of that decline, the cisco population faces several compounding pressures, from invasive species to predators.

Rising populations of fish like lake trout, which eat cisco, could be partly to blame, said Cory Goldsworthy, who manages the Lake Superior fishery for the Minnesota Department of Natural Resources. He added that the presence of invasive species like rainbow smelt and alewife, which compete with cisco for food, could also contribute to shrinking cisco numbers.

With the cisco population declining, Goldsworthy said the DNR is working to help commercial fishing operations adapt to a warmer — and less icy — Lake Superior.

They’ve allowed additional species, including round whitefish, to be caught and sold commercially. Some fishing operations have started testing the waters with round whitefish, but the market for this new fishery is still in its infancy.

Dwindling cisco numbers have real consequences for fishing businesses like Brisson’s: Each year, when the DNR estimates the size of the cisco population, it sets a quota — the total weight of fish that commercial operations can legally harvest in a year. And when population estimates decline, so do fishing quotas, limiting the maximum amount of income an operation can generate on a particular fish.

After two hours on the lake, Brisson guided his boat back into the harbor as the sun began to rise.  Brisson’s assistant, Linnell, summarized the day’s haul: “Not good.”

They snagged about 200 pounds of cisco that morning — about a fifth of the size of the catch from the day before.

But despite the disappointing haul, Brisson said he’s not concerned about declining cisco numbers. In his experience, fish numbers are unpredictable — that boom and bust — and warmer waters and less reliable ice are just part of that inherent uncertainty.

“That’s why they call it fishing,” he said. “otherwise they’d call it catching.”

So, he plans to keep fishing, he said, as his grandfather did, as his uncle did, and as he always has. Brisson’s catch this November has been up and down so far, but he’s hopeful he can still reach his quota for the year. Then he’ll take a break from commercial cisco harvesting for the winter, so he can pursue his favorite hobby: walleye fishing.

To read the original article, hear an audio report of this story, and see several related stories, follow this link to the MPR News website.  https://www.mprnews.org/story/2019/11/18/signs-of-trouble-ahead-for-lake-superiors-historic-lake-her...