Minnesota asked me to gather deer spleens for science. It wasn’t easy. A deer crosses a road in Kandiyohi County, near Sibley State Park, in March 2009. The DNR asked roughly 2000 hunters to extract the spleens from any deer they might shoot this fall for a study on pesticides in deer.  Photo: Tom Weber | MPR News 2009

A few hours into rifle hunting season Saturday morning, I lined up four big, red organs on the tailgate of my truck. Two were deer spleens. Two were livers. Which was which, I could not tell.

Neither could my hunting buddy and onetime biology teacher, Rahn Farder.

“Do any of these look like cat tongues to you?” I asked. Said Farder: “No cat I’ve ever seen.”

Yes, deer hunt discussions in the woods can go a little off trail. This one, however, had a point.

Weeks before Saturday’s hunting opener, I’d promised DNR biologist Eric Michel I’d send him the spleens of any deer I might shoot, so he could test them for neonicotinoids. The popular farm pesticide has long been linked to pollinator declines in farm country and more recently, to fawn mortality in deer. I was one of about 2,000 hunters to volunteer.

Michel said the spleen would be easy to find. “It’s right under the stomach,” he said. “It looks like a cat’s tongue.”

So when I shot a plump doe, just 15 minutes into the legal season, I pulled on my rubber gloves with confidence.

When you gut a deer, however, everything gets mixed together. “Under the stomach” is no longer a useful detail.

The cat’s tongue description might have been helpful if I’d known it was meant to suggest shape, not size. I ended up googling a DNR instructional video on my smartphone — not something I’ve done before while wearing bloody elbow-length surgical gloves.

It turns out the spleen is about the size of a man’s hand. It looks very much like the liver, but smaller. I identified what I thought was the right organ, and was fairly confident until later that morning, when an eight-point buck wandered into the field below my stand and gave me a clean shot.

The guts of this new deer looked different than the first.

The spleen and liver were so similar, I thought at first the buck had two livers. That’s why I had to line up everything on my tailgate and ask Farder. We puzzled over the cooling organs for a few minutes.

“The DNR is going to get a lot of livers in the mail,” Farder said. 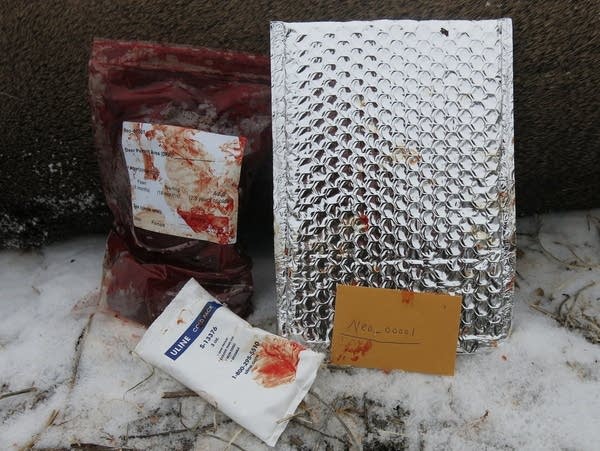 The DNR sent roughly 2000 spleen extraction kits to Minnesota hunters. This bag will be packed in two zip-lock bags, an insulated pouch, and mailed to a state lab.
Photo: John Enger | MPR News

Farder and I are not new to hunting. We’ve each shot and field-dressed dozens of deer.

Like most hunters, though, we are not deer anatomy experts. Most of us fish out the heart, and maybe a bit of liver for the frying pan.

Beyond that, it’s all just guts.

Farder and I, though, realized it’s important to learn. Sending in spleens will give researchers an important look at how deer might be affected by pesticides.

Before signing on with the DNR, Michel worked at South Dakota State University researching pesticide levels in a group of captive deer. It was that study that first suggested neonicotinoids might harm deer.

“It was a correlational study,” he said. “But there was a relationship between the level of neonics and survival probability for fawns.”

This new statewide study is a lot bigger than the first. Instead of a few dozen captive deer, the DNR will be testing roughly 1,000 wild animals. With all the new data, Michel hopes to map hot spots of pesticide exposure.

Farder told me he’s interested to see the results, but he’s also conflicted. He lives in farm country, not far from where we hunt. He’s an animal lover, but he also sees the value in pesticides.

“Farmers absolutely need to use chemicals to feed the world,” he said. “The yields just aren’t good enough without them. But if they affect wildlife, that’s concerning. I’m hoping they can find some alternative.”

Michel warned me that my deer might test pretty high for pesticides. Marshall County is heavily agricultural. He thinks he'll find more neonicotinoids in the spleens of deer that live around farms.

It's a working hypothesis, but he won't be sure until the spleen tests come back.

To read the original article and hear the audio report of this story, follow this link to the MPR website.https://www.mprnews.org/story/2019/11/13/minnesota-asked-me-to-gather-deer-spleens-for-science-it-wa...