A worker scoops tree branches into a 1,000-horsepower tub grinder at Environmental Wood Supply in St. Paul on Tuesday. The tree branches come from all over the Twin Cities metro area and are considered waste that is then burned for energy.  Photo:  Elizabeth Dunbar | MPR News

Welcome to Climate Curious, where we answer your most pressing questions about climate change, from the complicated to the too-afraid-to-ask. Got a question you’re dying to ask? Share it here.

How much carbon is released by burning firewood compared to letting the same tree decompose in the woods? Is heating with wood carbon neutral?
— Russ Myers, St. Paul

Wood — unlike oil, coal and natural gas — is not considered a fossil fuel. But decomposing trees do give off carbon dioxide, and so does burning firewood.

University of Minnesota professor emeritus Jim Bowyer is an expert in the type of analysis that involves calculating the emissions of certain actions. And trees, he said, have a significant relationship with CO2, one of the greenhouse gases that contribute to climate change.

"As a tree grows, it captures carbon dioxide from the air, water moves up the trunk. Water and carbon dioxide combine in the presence of sunlight, and in the leaves, the process of photosynthesis takes place," he said.

“Those sugars move down the trunk of the tree. Those sugars are converted to wood," Bowyer said. 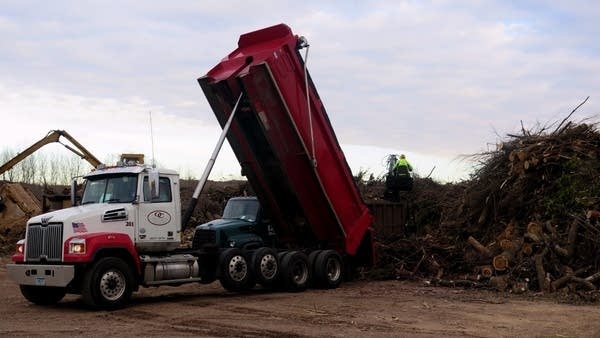 Trucks dump tree trunks and limbs into a pile at Environmental Wood Supply in St. Paul Tuesday. The trees are ground into chips that are then trucked to the St. Paul District Energy plant and burned to supply heating and cooling to downtown buildings.
Elizabeth Dunbar | MPR News

Trees, of course, don't live forever. One way to lock in that carbon capture for the long term is by harvesting a tree for lumber before it decomposes and allowing new trees to grow it its place.

But if a tree is left to die and decompose, Bowyer said, “the decay process is exactly the reverse of photosynthesis.”

He explains: “Water is used by decay fungi, and as the fungi works on the wood, the wood is then converted back to carbon dioxide.”

Burning that wood for heat speeds up the process, he said, but it's carbon neutral, as long as it's managed in a way that allows for new growth and new opportunities for carbon absorption.

"Wood is a renewable resource, assuming that the forests that the wood is taken from are managed sustainably,” Bowyer said.

But it wouldn’t be a good thing if all of us switched out our natural gas furnaces for wood furnaces. In urban areas, burning wood contributes other kinds of pollution that are harmful to people's health, especially the tiny particles in soot that can get into people's lungs.

"On the other hand, if someone's living in a rural area and they have a stand of trees on their land or close by and available, there's no environmental reason not to use that wood as a source of energy,” Bowyer said.

And under the right conditions, he said, cities can consider wood as a sustainable energy source, too.

Perhaps the best example is in St. Paul, where a wood recycling yard southeast of downtown collects tree trunks and limbs from across the Twin Cities, shreds them into chips and sends those wood chips to the St. Paul District Energy plant, which heats and cools downtown buildings and the State Capitol complex. The plant also uses natural gas, but wood is the primary fuel source. 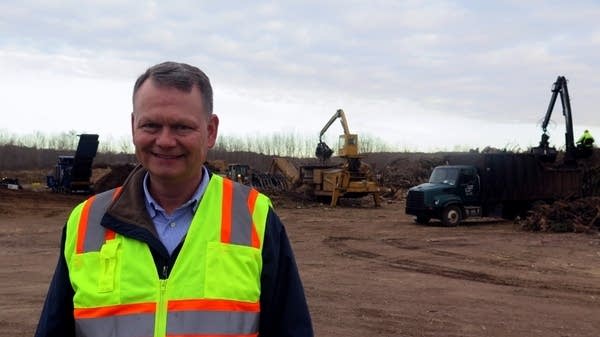 Jeff Guillemette, biomass fuel manager for Ever-Green Energy, said it’s been a busy fall, but trees are recycled all year round. Some tree removal, such as for emerald ash borer, happens in the winter, providing fuel for the District Energy power plant that heats buildings in downtown St. Paul.  Photo:  Elizabeth Dunbar | MPR News

“It's been a busy fall,” he said, adding that tree companies and city crews bring in plenty of trees in the winter, too. “We'll have projects that are going on, [like] emerald ash borer removal. A lot of that gets taken care of in the winter."

If it didn't come here, it might end up in a landfill, he said. "Eventually it's going to break down, it's going to create heat."

So, Guillemette said, why not let it heat up our buildings by burning it in a plant that, unlike your home fireplace, has pollution controls to keep soot out of the air?

To read the original article and read other climate related reporting, follow this link to the MPR News website.  https://www.mprnews.org/story/2019/11/09/climate-curious-is-burning-wood-for-heat-carbon-neutral