Coun. Shelby Ch'ng is the Chair of the 50th Anniversary Committee for the City of Thunder Bay. Photo: Jeff Walters/CBC

Thunder Bay's golden anniversary will kick off on January 1, 2020.

The city will turn 50, and the celebrations will start that day with the opening of a time capsule at the Thunder Bay Garrison, along with other activities at Waverly Park, and a free pancake breakfast.

"25 years ago, the City of Thunder Bay put things into a time capsule, sealed it off and welded it shut, and we have no idea what's in it. That's going to be our event to kick off the year," said Shelby Ch'ng, a city councillor, and also the Chair of the 50th Anniversary Committee.

The city said it has also created a new 50th Anniversary logo, which it hopes local businesses will use to promote the city, or specialty products created for the city's anniversary.

Other city created activities include a digital walking tour, which will allow people to listen to a narrated walk around the city, explaining its history.

The city said it will also provide special scrolls for 50th birthdays and anniversaries, one-time, short-term funding for events with a 50th anniversary theme, a dedicated art bus, city hall and street light banners as well as other legacy projects. 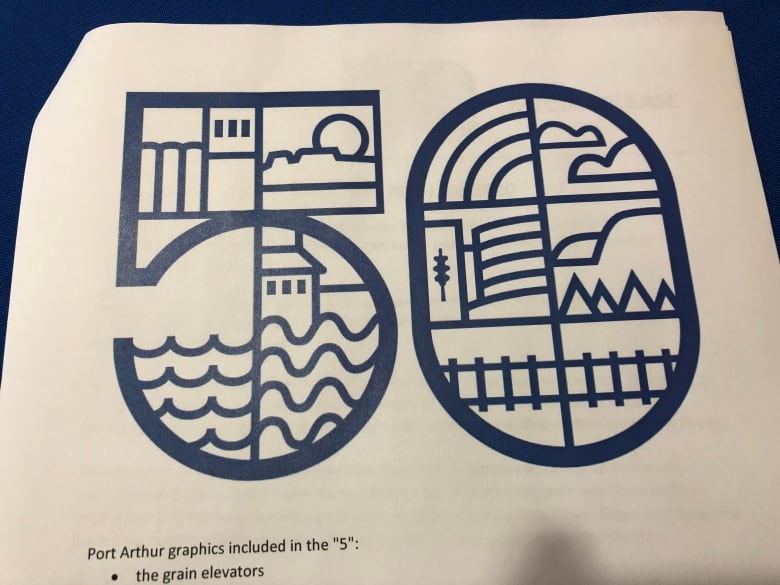 The 50th Anniversary logo for the City of Thunder Bay. Features in the 5 are from Port Arthur, while the 0 is from Fort William. Some features include grain elevators, the Sleeping Giant, the lighthouse, city hall, the Nor'Wester Mountains and railroad tracks. Photo: Jeff Walters/CBC

One project still in the works, said Ch'ng, is 50 memories being published online. The list, not yet finalized, could include stories about the late Mayor Walter Assef, a visit by Queen Elizabeth, the flamingo that flew to the city, polka dots on the Pagoda, and other notable events.

"It's been really fun to determine which 50 moments best represents Thunder Bay."

"I remember all of this, quite clearly, given my age. The folklore is interesting too in how we came to be Thunder Bay, and not Lakehead, and its good times, lots of reminiscing."

Mauro said he hopes many people who are from the city will return to Thunder Bay during 2020 for a homecoming event, scheduled for the late summer.

"The part that's strongest in my mind, for me, is the thought that there was a bit of engineering that went on in terms of the name. So, as has been confirmed, we had Lakehead and The Lakehead, those two names combined garnered by far the majority of the vote. And, if they hadn't done that it would have been Lakehead, and we would have been referred to as 'The Lakehead.'"

While Mauro didn't say how he would have voted in the naming election in 1969, but did have an assumption as to what the city would be called.

"When we were growing up, we assumed we were The Lakehead, that's how people around the country referred to us."

"Once were amalgamated, I think it was assumed that that would be the winning result."

Still, Mauro said even 50 years later, there may have been some benefit to still keeping Port Arthur and Fort William, separate.

"Politically, there's a part of me, I don't mind saying, that I think if we had remained two cities, there would have been some political friction that existed, that probably would have been to our benefit."

"I think I think that competition amongst municipalities, especially when you're as isolated as we are, can be a good thing."

"I have no problem when people refer to Fort William and Port Arthur. When you grow up that way, why would anybody ever be offended by that? There's nothing wrong with that. Port Arthur and Fort William are like neighbourhoods, just like Current River, and Northwood and Westfort and the East End."

"I grew up listening to my father talk about the west end, the south end, the east end. We're a community of neighbourhoods, and referring to Fort William and Port Arthur, there's nothing wrong with that, that's part of our history."

To read the original article and see related reporting, follow this link to the CBC Thunder Bay website.  https://www.cbc.ca/news/canada/thunder-bay/thunder-bay-golden-anniversary-1.5348959