To understand the health of a forest, conservation workers typically hit the ground and survey the land acre by acre.

It can involve trudging through the woods with hiking boots or snowshoes, looking for gaps in the forest canopy that need restoring.

But this summer, the Nature Conservancy’s Minnesota branch found an easier way to survey the large swaths of forest that comprise some of the over 60,000 acres it manages in the state.

The conservancy began using a drone to aid its reforestation efforts in northeast Minnesota. It has helped in several ways from making highly detailed maps to providing flyover video in key areas.

“It's almost like another staff member,” said Chris Dunham, the nonprofit’s forestry manager. “We're a small, small forest team here and we can use every advantage we can get.”

While the forest may look quite thick from the bird’s-eye view, the vantage point can be misleading. The nonprofit has estimated hundreds of thousands of acres of North Shore forest is in need of some help.

One of the Nature Conservancy’s focuses in Minnesota is on restoring riparian gaps ⁠— or places along rivers and streams in the forest where trees have died or been cut down.

Restoring these gaps is good for preventing erosion into the river, sequestering more carbon in the forest and creating better wildlife habitat.

There’s still ground-truthing to do once the drone footage in hand, Dunham said, “but you can be way more efficient if you’ve already taken a cruise above the trees and know where you’re headed.” 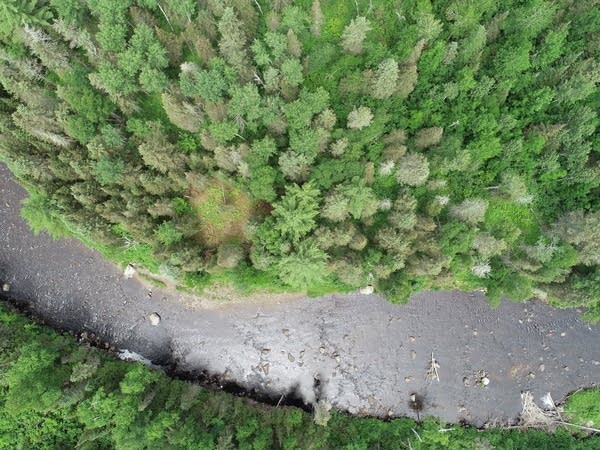 The Nature Conservancy hired Alex Rosenflanz, a senior studying forest science at the University of Wisconsin-Madison, to get its drone work off the ground.

It was a lot of trial and error at first, Rosenflanz said, but he eventually wound up with raw images to produce video, still photos and highly detailed maps.

The drone records latitude and longitude for each image it snaps. Rosenflanz said for every 20 acres he’d shoot, he’d wind up with 400 or 500 pictures.

He’d then stitch them together using an aptly named software, Drone2Map, which overlays the images onto their exact location on a map.

Images like this allow Nature Conservancy workers to see what types of trees are in an area and how dense the vegetation is. Before putting workers on the ground, the group can know how many trees it would want to replant and how much undesired brush would need clearing.

Now that Rosenflanz has created protocols for the conservancy’s drone operation, the group can now focus on implementing the new technology.

“We’re going to put the drone to work for us,” Dunham said.

To read the original article and see related reporting, follow this link to the MPR News website.  https://www.mprnews.org/story/2019/11/01/video-drones-help-restore-minnesotas-north-shore-forests