Peggy Ryan is all about the homemade Halloween costume. There was the monarch butterfly costume she made last year, complete with headpiece. The big bad wolf costume that was “pretty daunting.” She’s done a dinosaur, a raccoon, a fox, and even a baby Batman.

She’s been making Halloween costumes for her family for decades. These kind of projects take prep time, so she knows to start early. In August, she put out the call. She asked what her grandsons wanted to be this year.

The answer was a new one: “James wants to be the Edmund Fitzgerald.”

“And I said: ‘No, seriously, what’s the Halloween costume?’”

Her son Mike, who is James’ dad, doubled down. “He said: ‘No, he really wants to be the Edmund Fitzgerald. Do you think you could make it?’”

The Edmund Fitzgerald, of course, is the storied freighter that sank on Lake Superior in 1975. The ship departed from Superior, Wis., and was caught in a storm. The entire crew of 29 died. The following year, singer Gordon Lightfoot wrote a ballad for the sunken ship, making it perhaps the most well-known shipwreck on the Great Lakes.

“We vacationed in Duluth this summer, and James was infatuated with ships and he’s so into shipwrecks,” Ryan said. “So the story, of course, is really compelling, even to a 4-year-old. That’s where he came up with the idea that he needed to be the Edmund Fitzgerald.”

The original ship was 730 feet long, could carry over 25,000 tons of taconite iron ore, and set records hauling on the lakes. That’s a lot of history to honor in a costume for a 4-year-old.

Giving it a “a try” is a fairly modest description of what happened next. Ryan did her research. “I started looking online at pictures of the Edmund Fitzgerald to make sure that I got the painting all right, and the levels of the ship the way they were supposed to be.”

The result is a four-foot-long masterpiece replica. Not only does James love it, but so does Twitter.

Ryan’s daughter Erin — James’s aunt — posted about her mother’s epic undertaking: “She sent all of us photos of the NINETEEN SEVENTIES ERA CARGO SHIP costume she made for a FOUR YEAR OLD and it’s incredible.” Her original Tweet has almost 6,000 likes at the moment, a sign that many people are either nostalgic for the bygone era of 70s shipping, or for the grandmother who is willing to drop everything and make a historically accurate Halloween freighter for you.

The cardboard costume even lights up. It comes with shoulder straps and handles on the side so that James will be able to walk in it. 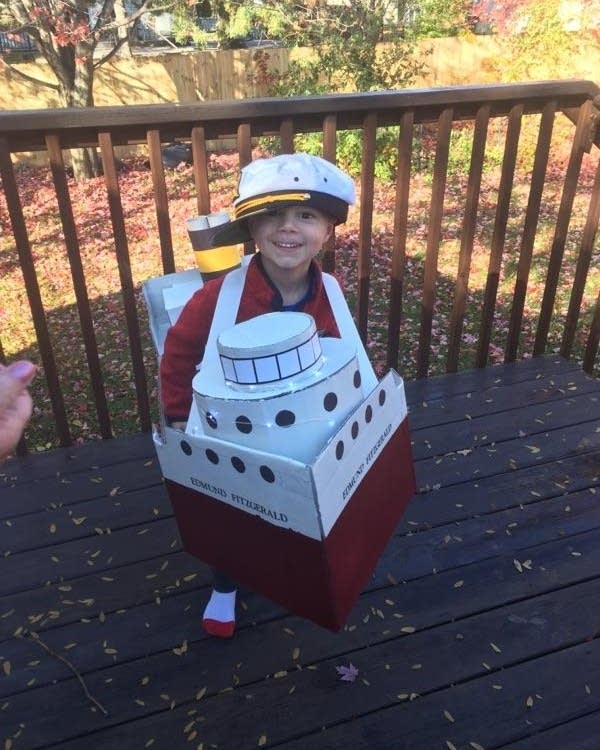 It took “precision and looking at a picture and making sure everything is just right, because I knew James would go and look at a picture of the Edmund Fitzgerald and tell me if it wasn’t right. He really would,” Ryan said. It “cost about $10 to build the whole thing, when you throw in two cans of spray paint.”

Ryan pulled it together on top of her regular job as a high school principal in northwestern Wisconsin. Her other grandson? He’s going as a ghost this year. But if you think Ryan just cut some holes in a white sheet and handed it over, you’ve learned nothing.

Ryan’s craftiness stretches back to when she was 10 years old. “When I was a kid, we didn’t have any money at all,” she said. “It was the 60s. My dad would say: ‘I’m not buying you any new clothes, but I’ll buy you all the fabric you want if you make your clothes.’ And fabric was cheap back then.

”For years, Ryan made everything: She didn’t have a pair of store-bought jeans until she got a job in high school and went to a department store.

“I’ve always had that creative part — partly out of necessity — but I really do enjoy building things and using my imagination, and using frugality as well to create something fun for kids. They can ask me to build anything, and I’ll figure it out for them.” 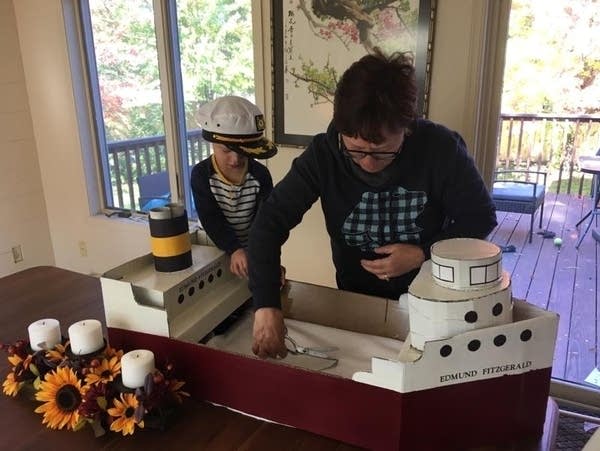 News of James’s Edmund Fitzgerald costume even made it back up to Duluth, where another of his aunts shared the costume with some old sea captains.

“They were of course blown away, because who’d think that anyone would want to be the Edmund Fitzgerald for Halloween?” Ryan said.

James will be navigating the waters, or more accurately, the sidewalks, of Owatonna, Minn., in his replica ship this year.

“We did make it rise again,” Ryan said.

To read the original story and read related reporting, follow this link to the MPR News website. https://www.mprnews.org/story/2019/10/29/one-4yearolds-very-minnesota-halloween-costume-the-edmund-f...