A Duluth firefighter and a utility worker check out the damage caused by a large maple that fell across Wicklow Street in Lincoln Park Monday afternoon, hitting a house and its gas meter, causing a gas leak. Photo: Steve Kuchera / [email protected]

In Duluth on Monday, the infamous gales of November came early and fiercely.

Fall’s colors turned dark gray, as an angry Lake Superior asserted itself as the master of the season.

“It’s really amazing to see the power of the lake,” Duluthian Chris Busche said. Dressed in rain gear, Busche was among the Duluthians who came down for a closer look. “You don’t understand it really until you’re right now here next to it,” Busche said.

Wind gusts of 60 miles an hour stirred up the lake and knocked out power to 9,000 homes and businesses.

City officials suggested staying away. Some, like Busche, couldn’t help themselves. “Come down to the lake, if you’re gonna live up here, might as well enjoy it,” he said.

Duluth city workers set up barricades, blocking access to Park Point due to flooding. A shelter has been set up for Park Point residents. 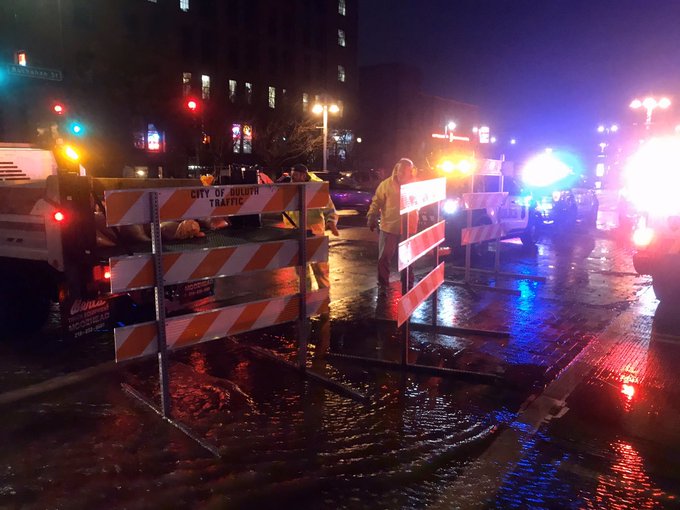 Parts of touristy Canal Park were closed to traffic because of street flooding, as was access, temporarily, to the Park Point neighborhood beyond Duluth’s historic lift bridge.

“We can’t get home,” Park Point resident John Crain said. Crain and his friend Kari McDonnell left Park Point for a movie and returned to barricades – and a nagging concern.

Emily Canney sent us this picture of her son capturing "Angry Lake Superior" in Canal Park in Duluth. #kare11weather

“A lot of backyards are flooded, even at my home the water’s in my backyard,” Crain said. “I’m going to go see if it’s gotten in my basement.”

McDonnell smiled and added, “And I’m going to pray.”

Back at the Lakefront, crashing waves punished the shoreline where Duluth’s Lakewalk used to be a favorite of visitors.

“It used to be right here,” said Randy Brody. “It’s been destroyed by previous storms and it hasn’t been rebuilt yet.”

At an evening press conference, Duluth Mayor Emily Larson raised the issue of climate change in relation to the storms.

“Yes, that’s a different press conference,” Larson said, “but we are definitely seeing them more often and with greater severity.”

To read the original article and see related reporting, follow this link to the KARE 11 website.  https://www.kare11.com/article/weather/duluth-storm-brings-massive-waves-flooding-and-power-outages/...