Ethan Haus, 6, and his dog were found about 2 a.m. Wednesday after a volunteer using a thermal imaging drone spotted them in a cornfield more than a mile from his home.  Photo: Sherburne County Sheriff's Office

A 6-year-old boy who went missing after getting off his school bus Tuesday was found safe overnight north of Becker, Minn.

More than 600 volunteers joined the search for the boy, later identified as Ethan Haus. His family said he’d last been seen getting off the bus with his siblings after school and going to play with the family dog. That was just after 4 p.m. on Tuesday.

A volunteer with a thermal imaging drone located the boy and his dog Remington around 2 a.m. Wednesday in a cornfield a little more than a mile to the east of his home, the sheriff’s office said in an update.

Ethan and Remington were lying down in the field when the drone spotted them.

Authorities said the boy was brought to a hospital to be checked and was cold but otherwise OK.

The search included several police canines as well as drones and a State Patrol helicopter. 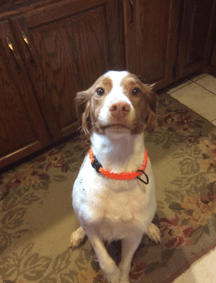 Remington was with Ethan when he was found in a cornfield early Wednesday.
Photo:  Sherburne County Sheriff's Office

So many people showed up to help, authorities said they were causing traffic problems in the area, and asked people to stay away at one point. They directed people to Palmer Park, near Briggs Lake.

“This truly was the epitome of a community caring for its own,” said Joel Brott, the Sherburne County sheriff. “To see the outpouring of support in such a short time period to come out and help find this boy and his dog is heartwarming.”

The commercial photographer who helped find Haus said he knew his drone could help in the Tuesday night search.

Steven Fines runs a photography company in St. Cloud and said he uses drones with infrared cameras for a variety of commercial uses, including troubleshooting solar arrays and looking for roof leaks on buildings.

Fines said when he saw authorities call for help, he brought his drone and lots of batteries. After flying over the area where Ethan disappeared, he said he spotted something unusual.

To read the original article and see related reporting, follow this link to the MPR News website.  https://www.mprnews.org/story/2019/10/16/boyfound