Manitoba Hydro poles and lines are down all over the province after a massive storm hammered the southern half. Submitted by Manitoba Hydro

Hundreds of people are seeking shelter in Winnipeg after being evacuated from First Nations communities as Manitoba reels from a snowstorm that has left tens of thousands without power, and forced the province and city to declare states of emergency.

A spokesperson for the Canadian Red Cross, which set up an emergency shelter for about 1,000 evacuees at the RBC Convention Centre in downtown Winnipeg, told CBC News on Monday it's prepared to set up another one to potentially double the number of people it can support.

By 2:30 p.m. the Red Cross said it had registered more than 3,300 evacuees from 14 First Nations, but many are staying with friends and family or in hotels.

The second emergency shelter will be opened if necessary because of the potential for more evacuees, the Red Cross said. 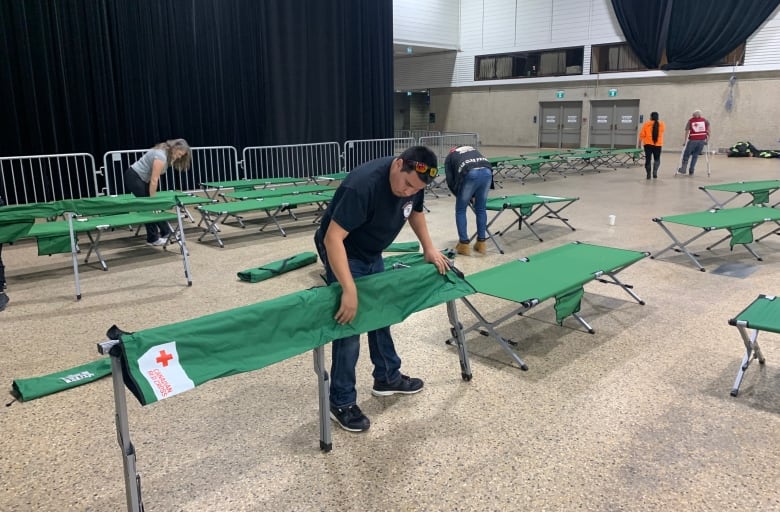 Volunteers from the Red Cross set up cots for evacuees to sleep on at the RBC Convention Centre. People from 11 Manitoba First Nations have been approved by the federal government to receive assistance. Photo: Ian Froese/CBC

Meanwhile, Manitoba Hydro has days worth of work ahead ot it.

Hydro spokesperson Bruce Owen told CBC News that crews from neighbouring provinces as well as the U.S. are ready to work at first light.

"More than 1,000 wood poles that are either down, they're split, or they need some kind of work to fix. It's going to take a huge, huge, huge effort on our part." 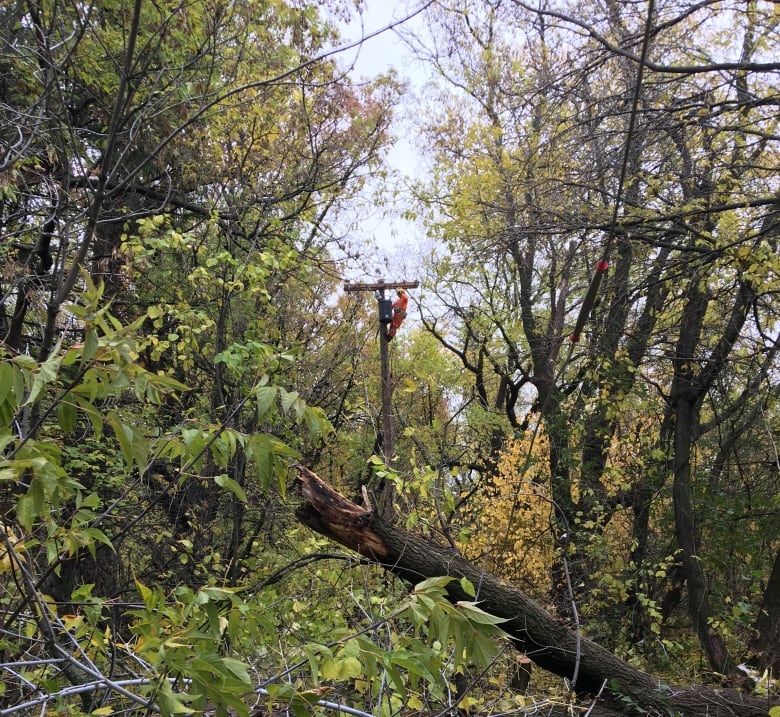 A Manitoba Hydro worker fixes lines damaged by the storm that ripped through the southern part of the province. Submitted by Manitoba Hydro

That means some customers won't have power for more than a week.

"We've got significant damage. We do have crews from SaskPower, Minnesota Power and Hydro One [from Ontario] helping us to tackle what we've got ahead of us over the next seven to 10 days," Owen said.

SaskPower has 23 employees deployed to Manitoba, a spokesperson for Saskatchewan's public utility confirmed in an email Monday afternoon.

As of 8 a.m. CT, more than 21,000 customers remained without power across the province. In Winnipeg, Owen said that number is scaling back, with just 900 customers still in the dark.

At its height, the entire city of Portage la Prairie, Man., was without power. As of last night, crews were able to restore much of it.

Portage la Prairie resident Heather Greenlay was shocked when she surveyed the damage.

"It looks like a tornado went though almost every area of Portage. Trees twisted up, building facades twisted off and roofs peeled back and whatnot," she said.

Irvine Ferris, the mayor of Portage la Prairie, doesn't have power himself, and it's been a challenging few days. 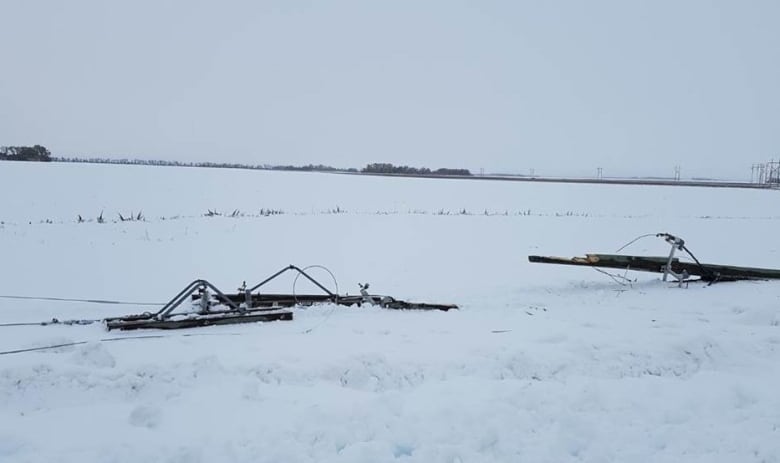 Manitoba Hydro tweeted this photo of a downed power line in rural Manitoba on Saturday night as the public utility worked to restore power to thousands of customers. Photo: Manitoba Hydro/Twitter

Aside from not being able to turn on the lights, residents have had to cut back on water use and haven't been able to flush their toilets because the waste water system runs on electricity.

He said over 100 people were stuck in the city because of road closures. The municipality opened a reception centre to host people who couldn't find hotel rooms. He said 80 people stayed there.

"It's been kind of a crazy 48 hours, but at the same time we've seen kind of the best in people," he said.

Although Ferris doesn't have power, he does have a propane barbecue, which allowed him to enjoy a Thanksgiving meal with his family.

"We've had some turkey sandwiches. It's pretty good," he said.

Manitoba Hydro says the biggest remaining outages are in the Interlake area, as well as in Dauphin and Neepawa, northwest of Winnipeg. 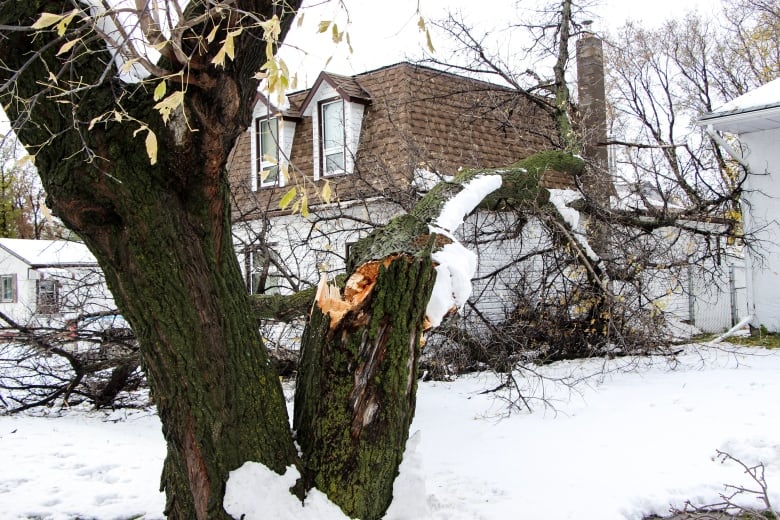 As of Monday morning, between 50 and 100 millimetres of precipitation had fallen in the southern half of Manitoba over the past week, according to a release from the province.

Rivers, lakes and streams in south and southeast Manitoba have peaked or about to peak.

The Roseau River, the Rat River, Vita, Gardenton and Joubert Creek are being monitored by officials from municipalities and the province.

The floodway, which was activated last week, is expected to operate until the end of the month.

The province declared a state of emergency early Sunday morning to give Manitoba Hydro the means to ask power utilities in Saskatchewan, Ontario and Minnesota for their help restoring services.

Later in the day, the City of Winnipeg ordered a state of emergency itself to access the resources to recover from a storm it estimated would cost the city tens of millions of dollars.

The early-season snowstorm, which lasted around two days, brought heavy snow, freezing rain and strong winds to the southern parts of the province. The heavy precipitation fell on trees still laden with leaves, damaging transmission lines and towers. 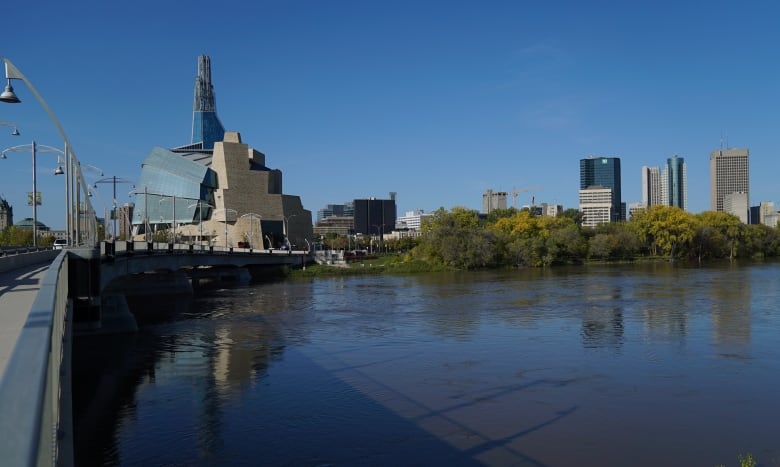 The Red River Floodway was activated on Oct. 9 -- the first time it's ever been used in the fall. Photo: Trevor Brine/CBC

A number of First Nations have also declared their own states of emergency after days without power. The Red Cross has been authorized by the federal government to support evacuations for 16 First Nations.

Jerry Daniels, grand chief of the Southern Chiefs Organization, told CBC News on Monday that thousands of people are affected.

"People are just looking for warmth and something to eat. The necessities are what people are worried about," he said.

He's worried about overcrowding in emergency shelters, especially for the vulnerable.

"We're hoping to keep our elders and those who are sick in much more comfortable situations," he said, including in local hotels. 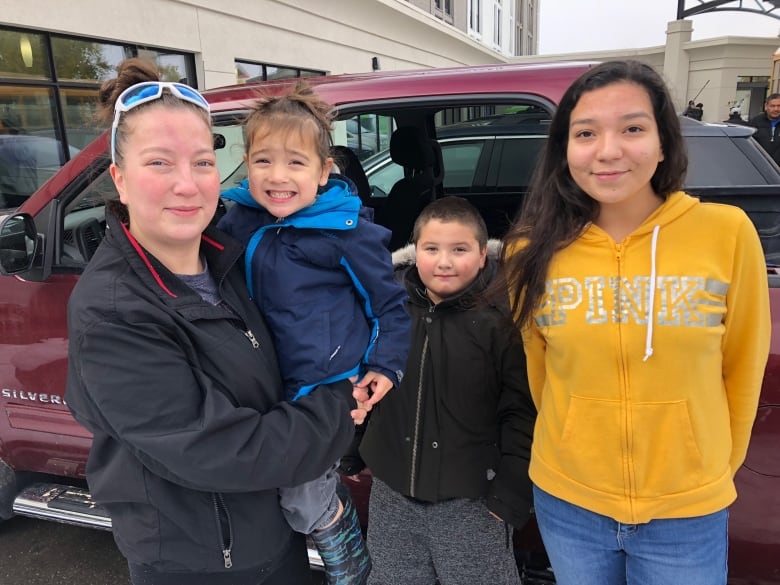 Erynn Moar and her three kids, drove to Winnipeg from their home in Lake Manitoba First Nation on Saturday after two days without power. Photo: Trevor Brine/CBC

One laundry business in Winnipeg's Osborne Village has offered to open its doors to evacuees who may desperately need to wash their clothes and other items.

A woman lugging an abnormally large load of laundry prompted the director of Village Laundry to pay it forward.

"They are helpless at that time. Today it's them, tomorrow it's somebody else, and maybe at one time it's us, so that's how we help each other," Jogesh Sharma said.

To read the original article and see related reporting, follow this link to the CBC News website. https://www.cbc.ca/news/canada/manitoba/manitoba-storm-winnipeg-red-cross-1.5320379