56 feet above Lake Superior, lighthouse buyer finds the beauty of life on the edge There is no driveway, not even a sidewalk, to Steven Broudy's new home away from home.

To get there requires a long drive through a narrow canopy of trees, then a 10-minute scamper down a third-of-a-mile-long breakwater at the end of Wisconsin Point — first over mammoth boulders, then along a thick concrete pier that juts 9 feet out of the water.

There, rising nearly six stories above Lake Superior, stands the Superior Entry Lighthouse, built in 1913 to help guide ships into the Duluth-Superior harbor. And, as of a month ago, it’s his.

"Standing here, I didn’t realize how big this thing was,” marveled Broudy, gazing upward at it for the first time.

The 34-year-old is vice president of sales at Bevy, a tech company in San Francisco where he grew up. But before he got into tech, he served five tours of duty in Iraq and Afghanistan as an Army Ranger.

He first learned that he could actually buy a lighthouse from the federal government during one of those deployments in Afghanistan, while he was surfing the internet during a break. He became fixated on the possibility.

“The thing about a lighthouse that always appealed to me is, on the one hand, there's something about staring out at a body of water that's really calming and soothing,” he said. “And then on the other hand, I don't know, it feels like it’s a fortress of solitude.”

So, for nearly a decade, he’d regularly check real estate listings of lighthouses the Coast Guard no longer needed. He was looking for something close to an airport, but still removed. When the lighthouse at Wisconsin Point went to auction, he knew immediately it was the one he had been waiting for. In early September, after a bidding war, he won it.

He had just purchased a dilapidated, century-old lighthouse half a continent away on a frigid, unforgiving lake, sight unseen, for $159,000.

He knew people thought he was crazy. But he didn’t see it that way.

"Life is too short to not take big, bold risks and do something because it feels right,” he said

Returning to its original grandeur

A little more than a month after winning the auction, Broudy boarded a plane for Duluth to see his purchase in person for the first time.

On a flawless fall day, two Duluth-based Coast Guard members met him at the lighthouse to hand over the keys.

They unlocked the metal door and showed Broudy inside. He clicked on a flashlight. Old rusted beer cans were scattered about the concrete floor of one single, hollow room, the ceiling some 14 feet tall. Plaster peeled off the thick walls. Broken windows were boarded up.

“It’s definitely in a state of disarray,” Broudy acknowledged. “But it's not past the point of no return. The bones are great."

He clambered up a narrow staircase to the second floor, where the lighthouse keepers had lived until 1970, when the lighthouse went to automation. Light filtered in through the boarded-up windows that line the curved walls of six small rooms, including what was once an old kitchen, bathroom and office.

Broudy’s plan is to renovate the lighthouse, to make it livable again — and to use it as a personal getaway. Maybe someday, he said, he might like to rent it out as a writer’s retreat.

The lighthouse was added to the National Register of Historic Places in 2007, as a structure that “continues to evoke feelings that recall the dedication to duty that has characterized United States lighthouse keepers throughout the country's history.”

“I think what's really important is maintaining the historical integrity of the lighthouse,” said Broudy. “I want to bring it back to its original grandeur.”

To accomplish that, he’ll have to navigate a tangle of red tape, from zoning to building codes to jurisdictional issues — the U.S. Army Corps of Engineers owns the breakwater on which the lighthouse sits.

Then there are the construction questions: How to provide electricity, water and sewer? How to comply with historic preservation requirements? What are the insurance needs? And how to do the work as fast as possible, knowing Lake Superior’s legendary gales will limit the opportunities to get the work done?

“I don’t know if he fully understands the nature of Lake Superior yet,” said Jim Paine, the mayor of Superior, Wis. “But we’re all quietly cheering him on around here, and we hope this is a big success.”

The lighthouse itself is in surprisingly good shape, said Mike Lovato, a historical architect with LHB in Minneapolis who visited the lighthouse with Broudy. He said he’s worked on two other lighthouse restoration projects, and both were in considerably worse condition than this one.

What Broudy wants to do with the Superior Point Entry light, he said — restore it to its original design and live in it, like a modern-day keeper — is the best thing for a historic building.

“A good roof and somebody in the building are the two most important things you can do for an old building,” he said. 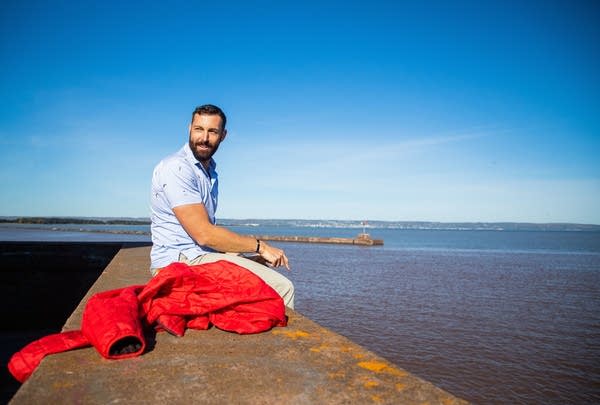 Steven Broudy talks about diving into Lake Superior from the concrete ledge he was perched on Oct. 7, 2019, at the Superior Entry Lighthouse in Superior, Wis.  Photo: Derek Montgomery for MPR News

A series of steep staircases through circular rooms and a narrow ladder lead to the top deck of the lighthouse — 56 feet above Lake Superior.

To the west, the city of Duluth sprawls up the hillside away from the lake.

"And you look to the other side, and there’s absolutely nothing,” said Broudy. “It’s this weird contrast. It’s almost like this is the dividing line for the end of the earth."

A fog horn blares — a piercing reminder that this is a working lighthouse.

The Coast Guard will keep a key to the building so it can continue to maintain the horn and the light at the top of the tower.

Broudy knows there are people who think he's crazy, that he's throwing money away. But he looks at the world differently now. He’s seen things that changed him. He’s gone to war — five times. And not long ago, his wife was diagnosed with a rare form of cancer. He wants the lighthouse to be a refuge for her, too.

“I just am acutely aware of the fact that life is really short and fickle and fleeting and fast,” he said. 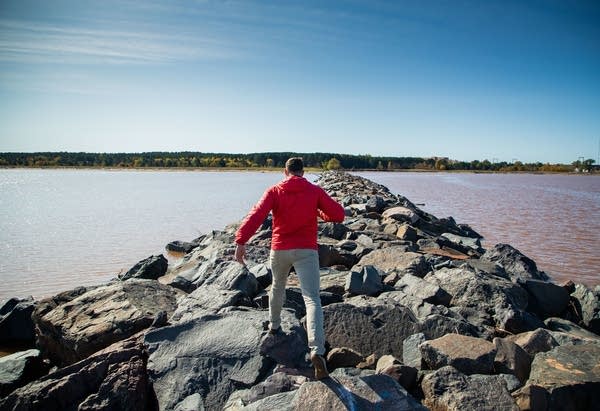 Steven Broudy hops from rock to rock after checking out the Superior Entry Lighthouse.
Photo: Derek Montgomery for MPR News

So, he turns to Henry David Thoreau, and “Walden,” where he writes about wanting “to live deep and suck out all the marrow of life.”

For Thoreau, a cabin on the shores of Walden Pond was a refuge from the bustle of Boston and New York. That’s how Broudy thinks about his lighthouse, jutting off the shore of Superior.

“The idea of setting up a really simple life on the edge of a body of water and just being much more deliberate and appreciative of life and intentional about it is really appealing,” he said, “especially being in the hustle and bustle of San Francisco, where everyone's trying so hard all the time. It's nice to just push pause and stop striving."

Broudy is keenly aware that some might see him as just another rich tech guy, turning a historical property into a personal getaway. And he recognizes there’s an irony in trying to escape from the tech-crazed world he’s helped create. He says he gets it.

But what he wants to do after he restores the building is to serve, in a way, as a modern-day lighthouse keeper, to care for the building, and for himself. To live deliberately in this fast-paced world.

To read the original article and see more photos in a gallery, follow this link to the MPR News website.  https://www.mprnews.org/story/2019/10/14/56-feet-above-lake-superior-lighthouse-buyer-finds-the-beau...