Caribou Island, in remote Lake Superior, is home to six caribou that were relocated from Michipicoten Island. The once plentiful caribou herd there was decimated by wolves that came in on an ice bridge in 2014. Photo: Christian Schroeder

A small group of caribou relocated to a remote Lake Superior island last year, has successfully bred.  The animals, transferred from Michipicoten Island in March of 2018, included four cows and two bulls.

The transfer was undertaken by the Ontario Ministry of Natural Resources and Forestry to help ensure the survival of Lake Superior's caribou population.The OMNRF undertook the caribou relocation in collaboration with the Michipicoten First Nation.

Wolves that crossed on an ice bridge in 2014 ultimately decimated the caribou on the Slate Islands and Michipicoten Island.

A few remaining caribou were trapped off Michipicoten before they could be taken by wolves.

Nine caribou were also moved back to the Slate Islands.

To see how the relocation had fared on Caribou Island, which is located 72 kilometres south of Wawa, a group of four people boated to the island this past August.

Retired ministry biologist Gord Eason was one of those in the group.

He said they positively identified caribou calf tracks, which means at least one of the relocated cows gave birth.

For genetic reasons, Eason said they still want to confirm both bulls survived the winter.

"So the question was, how were the bulls doing? We know there is at least one there. But we would like to make sure there are two, of course," Eason said. "Just as a back-up in case something happens to one — sort of the population security."

Eason said trail cameras may be used on the island in the future to confirm the presence of both bulls.

He said the caribou were transferred from Michipicoten Island to Caribou Island as a back-up plan if the relocation on the Slate Islands failed.

Eason said Caribou Island is far enough away from the mainland that it's unlikely wolves would travel to it over an ice bridge. 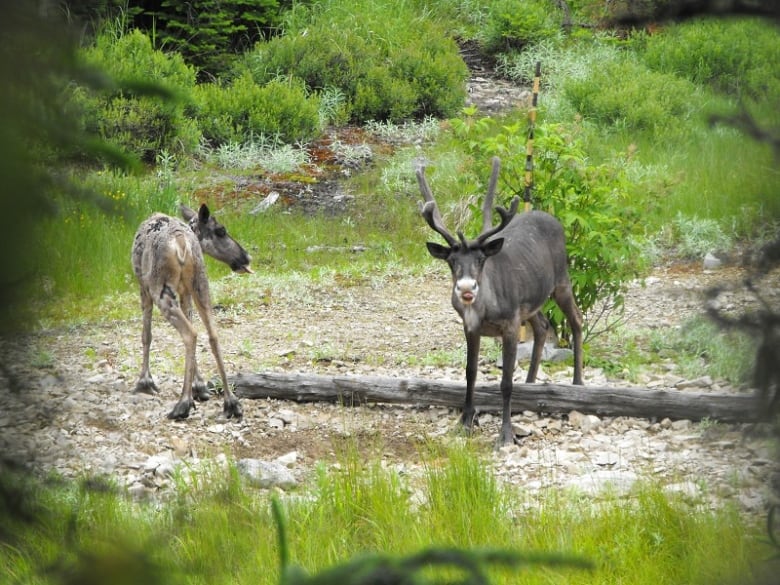 Eason said Caribou Island is relatively small, at 6 square kilometres, but it has excellent lichen growth along the lake edge as well as on trees.

Caribou primarily feed on lichen. However, Eason noted the island is not large enough to sustain a big herd of caribou.

"Once (the herd) gets up into the mid-teens, that's about where we would like to keep them," said Eason. "Because the island isn't big ... it can't hold a lot of caribou without them damaging their habitat."

Eason said if the cows get bred again this fall, there should be enough caribou on the island by the spring of 2022 to potentially move a few.

"It would be very nice to restore the population on Michipicoten Island, because it's generally safe from predators," he said. "The wolves don't get out there very often, because the ice bridge doesn't form very often."

All remaining wolves were trapped off Michipicoten island in March of 2019.

A crew, including staff from the Ontario Ministry of Natural Resources and Forestry (MNRF), moved about half a dozen wolves from the island to a park on Isle Royale on the Michigan side of the border.

To read the original article and see related reporting, follow this link to the CBC Thunder Bay website.  https://www.cbc.ca/news/canada/thunder-bay/lake-superior-caribou-successfully-bred-1.5316691