Ask a 'sotan: What's an eco-friendly way to bag groceries? Ask a 'sotan is an occasional series exploring the questions from curious Minnesotans about our state. Have a question about life in Minnesota? Ask it here.

The Duluth City Council could soon vote on a proposal that would require retailers to charge a nickel for most single-use plastic and paper bags.

The proposed ordinance is aimed at discouraging use of plastic and paper bags, although some food, garbage and pet bags would be exempt.

It’s an issue that has played out in cities across the country, including Minneapolis. With Duluth poised to vote on its plan, we asked MPR News listeners to share their thoughts and questions about efforts to scale back plastic bag use.

Rolf Weberg and Brian Barry of the National Resources Research Institute at the University of Minnesota Duluth took up some of the questions and provided feedback.

Listener Ken Shockman wanted to know more about reusable bags that are viewed as alternatives to simple plastic bags.

“I use a reusable bag, but they eventually wear out and have to be discarded,” he said. “A discarded reusable bag is a pollutant. What’s an alternative for reusable bags that aren’t eco-friendly?” 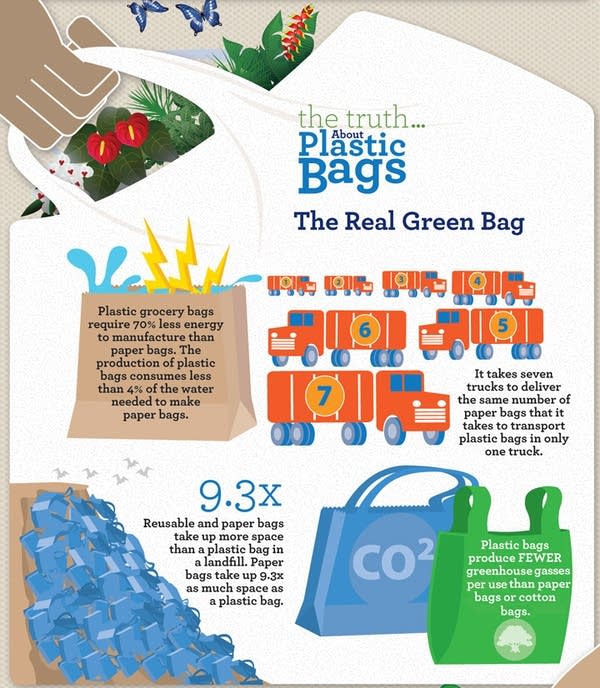 This graphic from Bag the Ban website shows how difficult it can be when deciding which bags to use if you factor in the environmental footprint.  Image: Bag the Ban

Most reusable bags sold in stores contain plastic and will end up in a landfill, said Barry, adding, “If you had one that was complete cloth, that would be my choice.”

Shockman thought using cloth bags was a good idea, but noted a problem that shoppers often face: You have to bring a bunch of bags when you go to the grocery store.

Barry and Weberg suggested using a sturdy cardboard box that can be used repeatedly and later recycled.

A hard plastic bin, the kind you might keep in your car trunk, can also help ease the environmental burden of plastic and other reusable bags, they said.

Don’t know what to do with the plastic bags you hold onto for recycling? This video might help:

Another listener asked about the value of recycling plastic bags into other products, such as boards.

While it’s a great idea to turn a waste material into a product, it isn’t always easy, Weberg said.

“When you keep recycling a polymer, you’re basically melting it down and it degrades. And, plastic lumber doesn’t have the performance properties needed for the application,” he said.

When you consider all the resources that go into recycling, and if there isn’t a big market yet for a product like plastic lumber, the trade-off isn’t worth it, he added.

The applications aren’t quite there yet for biodegradable plastics, Barry added. “You might be able to make one for a bag of chips, but you can’t make one for milk juggs with current technology.”

For Minnesotans who want to be more environmentally conscious but struggle to find alternatives to plastic bags or similar packaging, it’s best to minimize the need for them as much as possible, Barry and Weberg said.

“People have choices. They might need to ask themselves, ‘Do I really need to buy it in the first place?,’” Weberg said.

“When you go buy a shirt, and one comes in and it’s in three plastic bags with all kinds of clips, or there’s another one just sitting one the table and you buy it,” he said. “Those are clear choices of getting away from excessive packaging.”

To read the original article and read related reporting, follow this link to the MPR News website. https://www.mprnews.org/story/2019/09/27/ask-a-sotan-plastic-bags

Watch a video on how to recycle plastic bags.