State regulators denied a water quality permit for Enbridge Energy's proposed Line 3 replacement project on Friday, a procedural action in advance of a meeting scheduled for next week to lay out next steps for evaluating the controversial oil pipeline.

The decision from the Minnesota Pollution Control Agency to deny the permit, known as a 401 certification, was expected, after a state court ruled earlier this year that the pipeline's environmental review needed to be revised to evaluate the impacts of a possible oil spill near Lake Superior.

Enbridge plans to reapply for the permit, and much of the work on it has already been completed, the MPCA said.

It’s just the latest regulatory twist in Enbridge’s more-than-four-year-long effort to replace a corroding oil pipeline built in the 1960s with a new line that could carry nearly twice as much oil across along a new route across northern Minnesota.

Calgary-based Enbridge won the key state approvals it needed to build the new pipeline in June 2018. But the project has been stalled for more than a year as the company has worked to meet requirements imposed by state regulators, and as challenges to the project’s approval play out in court.

The Minnesota Public Utilities Commission meets Tuesday to establish a schedule to fix the project's environmental impact statement, which is required before the Minnesota Department of Natural Resources and the MPCA issue the additional environmental permits Enbridge needs to begin construction, including the 401 certification. 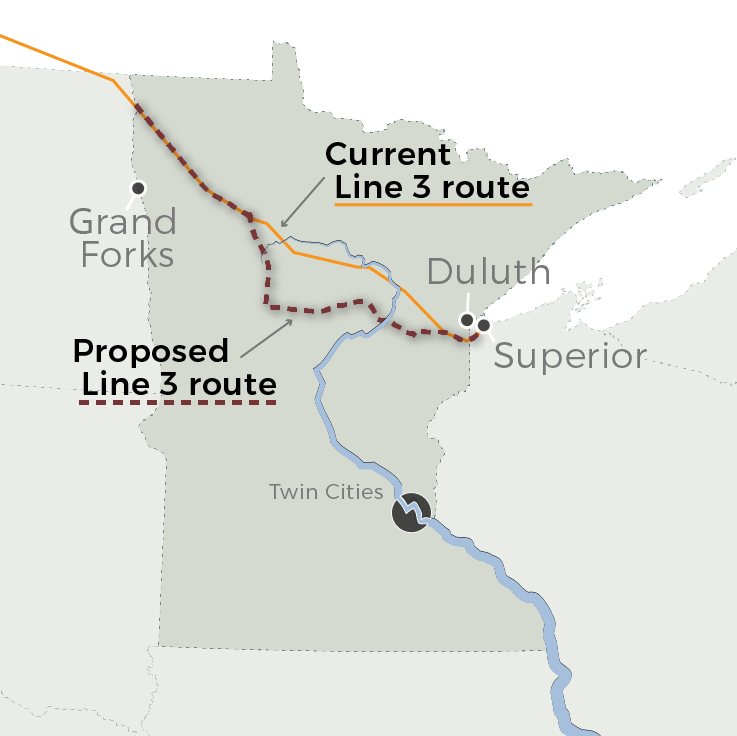 Both pipeline supporters and opponents reacted positively to Friday’s news from the MPCA. Enbridge said it anticipates submitting an updated application in the near future, including a monitoring plan for aquatic resources and a revised proposal for mitigating more than 400 acres of wetlands that will be impacted during construction of the pipeline.

Enbridge has said it intends to bring Line 3 into service by the end of 2020, a timeline the company still believes it can meet.

“It’s about safety and integrity and reliability and protecting the environment,” said Enbridge’s Leo Golden. “We said it from the start — this line needs to be replaced, and we’re committed to replacing it.”

Meanwhile, opponents are expecting hundreds to march and rally in Duluth on Saturday in opposition to Line 3, including busloads from the Twin Cities and northern Wisconsin. They’re urging Minnesota Gov. Tim Walz to reject the permits Enbridge needs to construct the pipeline.

"Today's decision shows that the MPCA is taking their role of protecting Minnesota's waters and communities seriously,” said Margaret Levin, director of the Sierra Club’s North Star Chapter. “We expect that state leaders will continue to follow the science — and that the science will lead to a full rejection of this pipeline."

To read the original article and see related reporting, follow this link to the MPR News website. https://www.mprnews.org/story/2019/09/27/minnesota-regulators-set-to-resume-work-on-line-3-review