Seventh-grader Katherine Briggs makes signs Thursday to use for a climate strike she helped organize for Friday at the Fargo middle school she attends.  Photo: Dan Gunderson | MPR News

“College students are often on the cusp of change, and that is really encouraging to me — that I am following in a grand tradition of other people who have gone on to evoke change,” said Becker, a St. Olaf College junior studying environmental studies. 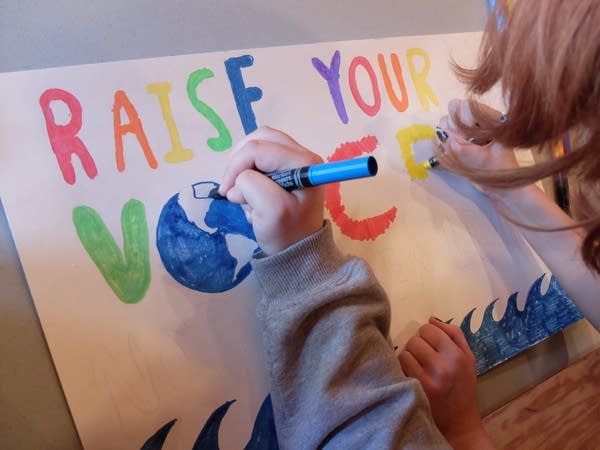 She’s planning to join other St. Olaf students and Northfield teens to, in the words of the Global Climate Strike, “demand an end to the age of fossil fuels” and raise awareness of a growing climate change crisis. 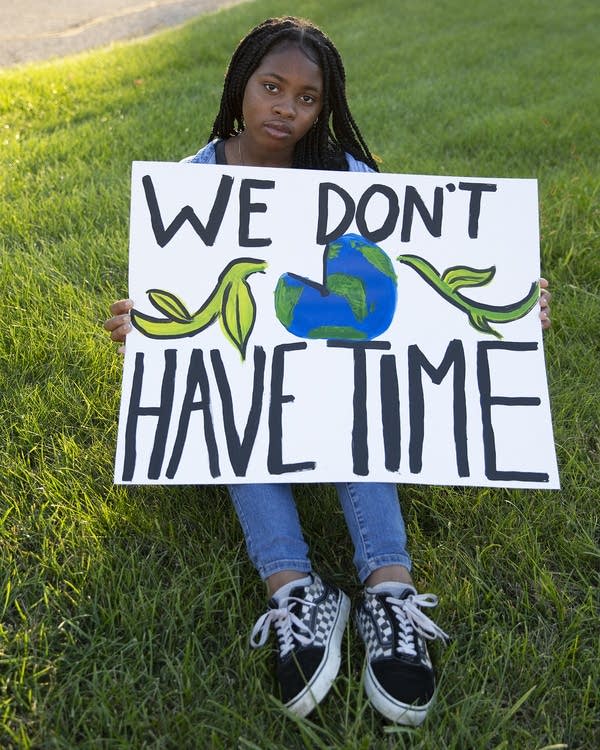 The largest demonstration will likely be at the State Capitol, where organizers say they expect thousands of students, parents and supporters to join the global action.

The protesters want a rapid reduction in emissions of the heat-trapping gases that are largely responsible for warming temperatures and more intense rains that alter everything from food production to natural disasters.

“It’s awesome just to see people that are like me, that are my age, coming to support this big get-together so we can all help each other and make our world a better place,” said Millie Osei, a student at Stillwater Area High School planning to join the strike.

Students from across the region have shared with MPR News why they’re participating in the protests:

“Climate Change is an expensive and difficult disaster impacting the world and the least privileged people are impacted the most.

So with my immense privilege, I will stand up and use my voice to speak for those who cannot.” 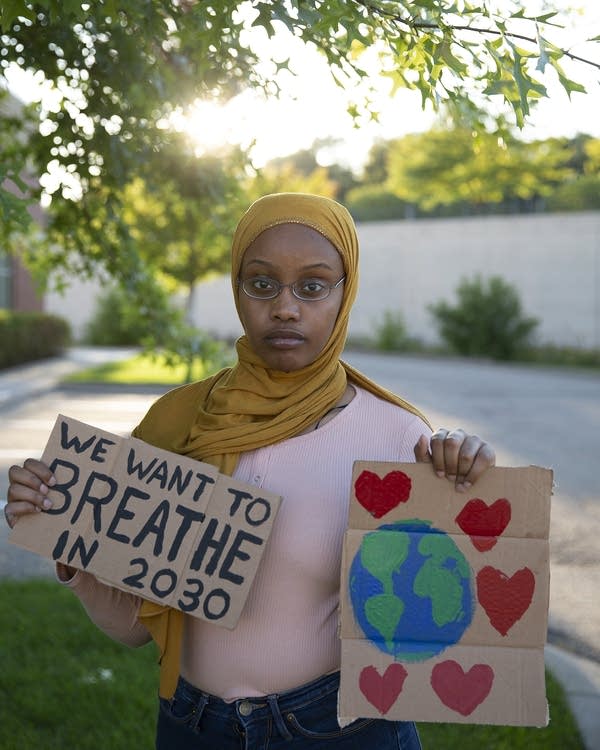 “I feel like it's a very important thing for future generations to continue to have a planet to foster them and places where humans can live.

The climate change crisis is very rapid and very dangerous.

It should be a primary topic and discussion all over the world. I think politicians should move to help the crisis. Without Earth, we all die and it gets very tragic.”

Mia DiLorenzo, Edina High School: “The only viable option that would adequately change the culture” 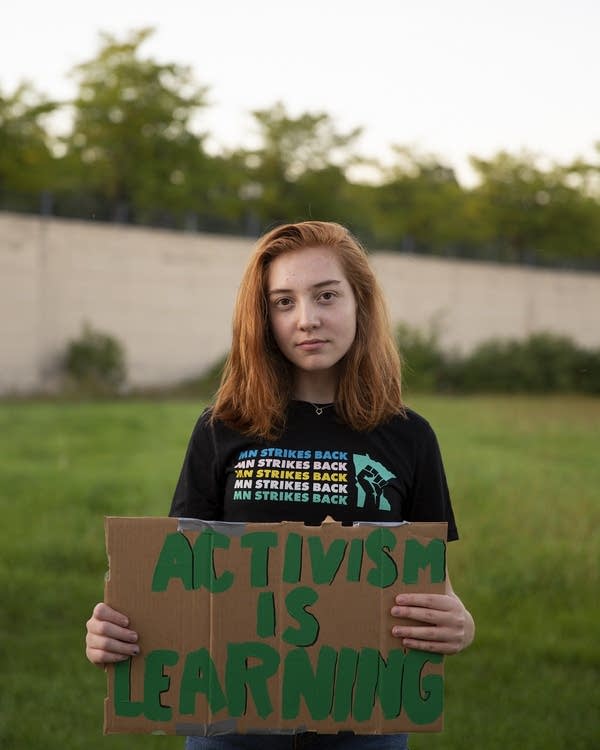 “It’s really important to me to participate in the global strikes because I know that’s one direct action I can take to begin to change the culture and narrative surrounding the climate crisis.

A lot of people think we’re doing this to skip school. We still have to do our assignments, we still have to make up our attendance, speak to all of our teachers, make up tests, do all of that even before we strike.

So, this isn’t really something we’re doing for fun. There are a lot of other things that a lot of us would be doing differently with our time.

We’re resorting to striking because that’s the only viable option that would adequately change the culture and the mindset of people we need to change.”

"It just brings a lot of gratitude and just love [to have] all of us coming together to help out with this climate change epidemic that we have in our world today. “ 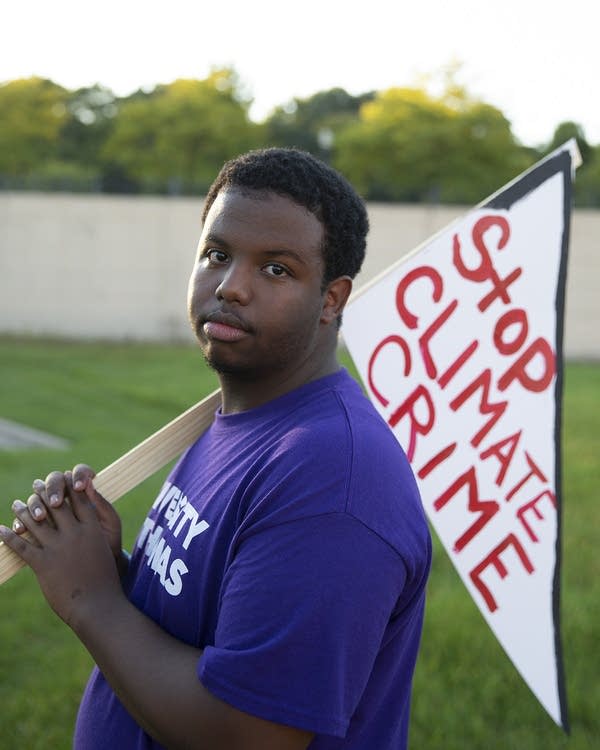 "I feel like communities of color are being directly affected the most, such as the Flint water crisis.

I just joined the climate change movement because, [while] I knew it for a long time, it wasn't until the California wildfires, the Amazon rainforest destruction, the rising sea levels [and] the Arctic polar caps melting that I realized, ‘Wow, it's actually happening.’

Our world is changing very fast and there's not much time left. We must act now before it's too late.

Climate change is very important to me because I believe there’s only one planet. We must demand change and policies that will help keep this Earth alive.” 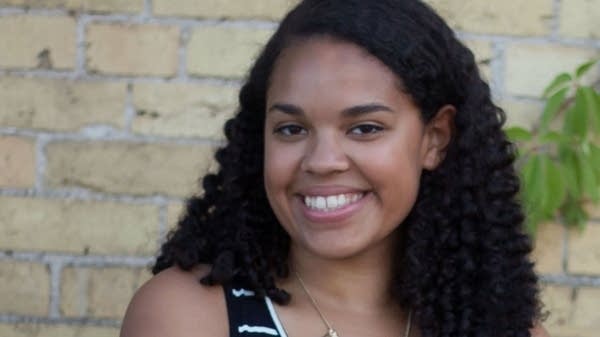 “I want to show our representatives, large institutions, older generations and the world that my generation will no longer stand by while the world is destroyed.

We won’t take ‘no’ for an answer, and we’ll fight until there is meaningful action toward stopping and reversing the effects of climate change.” 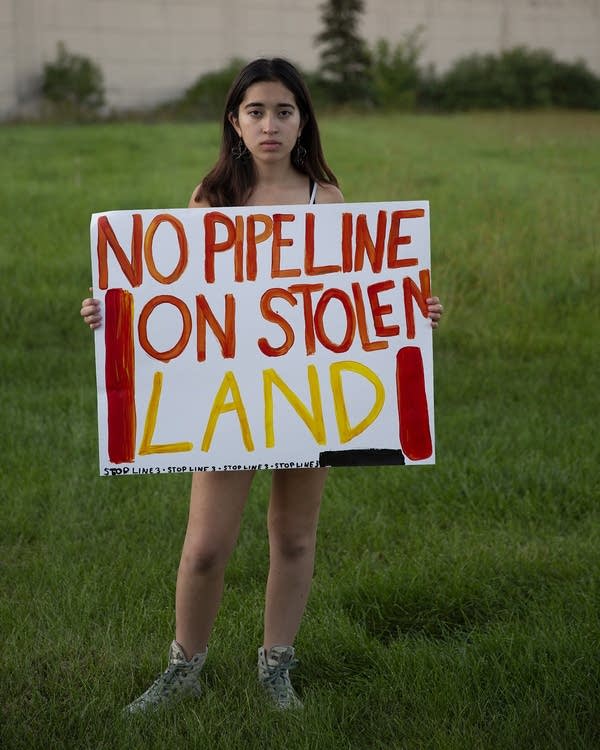 “Growing up, I saw people talking about the effects of climate change on nature, on the environment, and I always was a little concerned about it, but it was only recently that I realized how climate change affects people.

People are already dying in storms, in droughts all over the world. We’re already seeing refugees flooding various borders trying to find a place that hasn’t been destroyed. It’s only going to get worse, and the areas that are safe are just going to get smaller and smaller. 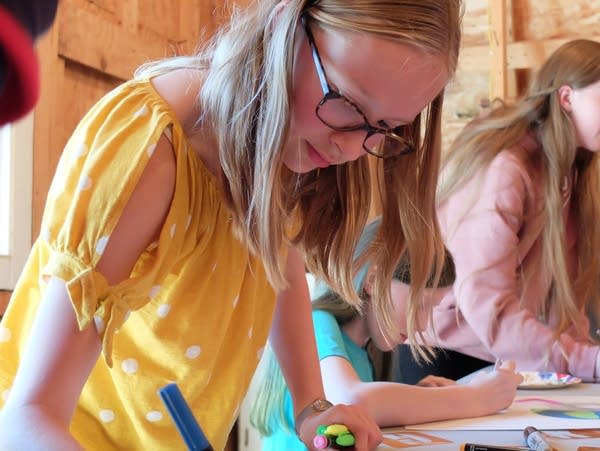 “Just thinking about how I’ll only be, like, 24 when this increase in global events happens, that I won’t even maybe have a family yet, it’s really heartbreaking.

Just to wrap my head around it, it’s really hard, and I feel like at my age I shouldn’t have to do that. And that’s one of the reasons I want to do this strike.”

“Just thinking about all the issues that are happening now and the things that will be happening in my future that, at that point, could be irreversible, is terrifying.”

Clovis Curl, St. Olaf College: “These are conversations that everyone should be having” 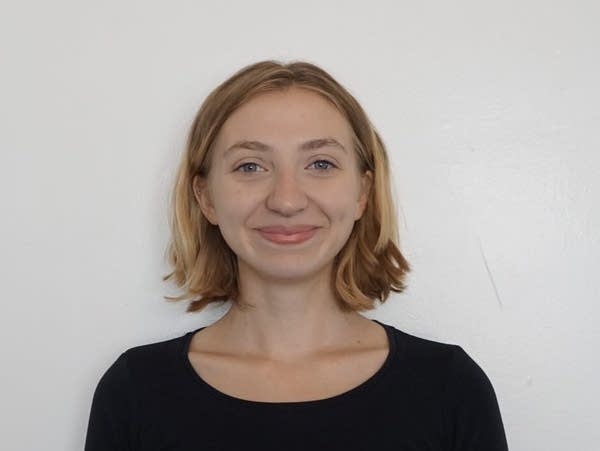 “These strikes and caring about the environment and having discussions about climate change and who it is affecting is not reserved for environmentalists.

To read the original article and see related reporting, follow this link to the MPR News website.  https://www.mprnews.org/story/2019/09/20/minnesota-students-striking-for-climate-change-share-hopes-...