Crews from the U.S. Fish and Wildlife Service and the Mille Lacs Band of Ojibwe clean up trash from Spirit and Hennepin islands in Mille Lacs Lake on Aug. 22. The garbage was left behind in the lake by anglers, then picked up and brought to the islands by double-breasted cormorants to line their nests.  Photo:  Kirsti Marohn | MPR News

A recent cleanup of two islands in Mille Lacs Lake could help prevent native birds from drowning in junk left behind by messy anglers.

At less than 1 acre, the Mille Lacs refuge is the tiniest of all 550-plus national wildlife refuges in the United States. The largest, the Arctic National Wildlife Refuge in Alaska, stretches over more than 19 million acres.

But the Mille Lacs refuge, made up of jumbled rock-covered Spirit and Hennepin islands, is an important breeding ground for native birds. They include the common tern, a species listed as threatened in Minnesota. 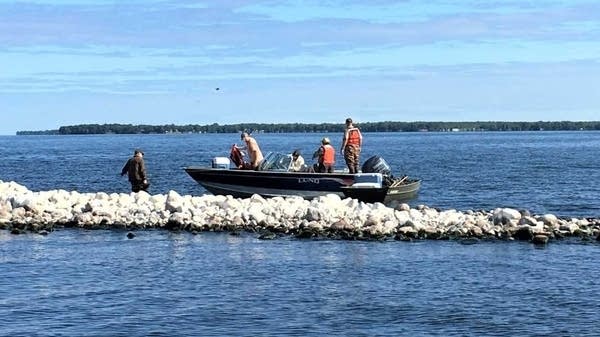 Crews from the U.S. Fish and Wildlife Service and the Mille Lacs Band of Ojibwe clean up trash from Spirit and Hennepin islands in Mille Lacs Lake on Aug. 22.
Photo:  Kirsti Marohn | MPR News

One of those bird species, the double-crested cormorant, likes to collect trash to line its nest. And there’s no shortage of trash left behind in Mille Lacs Lake, said refuge manager Walt Ford.

“Every year, they bring in huge amounts of all sorts of items that were lost, or unfortunately deposited in the waters, by careless fishermen,” Ford said.

“The birds are doing us a huge service by collecting this stuff that’s randomly floating out there, or lying on the bottom of the lake,” Ford said. “They have some sort of natural attraction to this stuff. They think it’s nice to put it in their nest.”But the rubbish poses a serious threat to other birds using the island, such as gulls, great blue herons and American pelicans, which can get entangled in the trash, especially single-strand fishing line known as monofilament. When that happens, “it’s a death sentence,” Ford said.

Usually once a year, staff from the refuge and the Mille Lacs Band of Ojibwe’s Department of Natural Resources remove all the litter from the islands. This year’s cleanup on Aug. 22 yielded eight bags of trash on Hennepin Island and 14 more on Spirit Island.

The cleanup is carefully timed for late August to ensure the safety of young birds, Ford said.

“There’s a lot of deep crevices between the boulders of Spirit Island,” he said. “If we scare the birds and they’re not able to fly and they’re trying to run from us, it could have dire consequences for any that fall down into these rock crevices.”Members of the Mille Lacs Band of Ojibwe see the island cleanup as an important part of the band’s role as stewards of the lake.

“The tribe generally tries to keep the lake as pristine and clean as possible,” said Carl Klimah, fisheries manager for the Mille Lacs Band of Ojibwe. “So when you get a situation where there is human debris that is encroaching on wildlife, that’s reason enough to get involved, especially on a lake like Mille Lacs that is so important to the tribe.”

Klimah, who fishes on Mille Lacs Lake himself, said it was an eye-opening experience to see all the items anglers leave behind.

“It would help if people were just a little bit more aware of the fact that even one little piece of litter can add up to quite a bit,” he said.

To read the original story and related reporting, follow the slink to the MPR News website.  https://www.mprnews.org/story/2019/09/02/island-cleanup-nets-trash-left-behind-by-mille-lacs-anglers