Walking down West Michigan Street in Duluth on a Friday evening, there’s a buzz in the air around Bent Paddle Brewing Company. The place is packed.

At the front of the taproom is a makeshift stage with a brightly colored mural. A band, Hobo Nephews of Uncle Frank, plays its first set of Americana music as a group of young children runs around them. It’s sometimes hard to hear the music over the chatter of the crowd, but nights like this are becoming a more familiar weekend scene in Duluth.

In the past six years, there has been a boom of breweries and cideries opening up in the city. Seven new taprooms have sprung up in that time, and as the numbers have grown, so has the local music scene.

Outside traditional music halls and theaters, people looking for live music in Duluth could typically find it at restaurants and bars like Pizza Luce, Rex’s Bar, Sir Benedict’s Tavern on the Lake and what’s now Wussow’s Concert Cafe. But as more breweries and cideries have opened their own taprooms in town, they’ve also added more spaces for musicians to play — and musicians say they’ve increased the number of shows happening in Duluth each week.

“Where there’s people who want to hear music, we’ll come and play,” said Teague Alexy, who plays guitar and sings for Hobo Nephews of Uncle Frank. “The combination of microbrews and local music and local beer seems natural up here.” 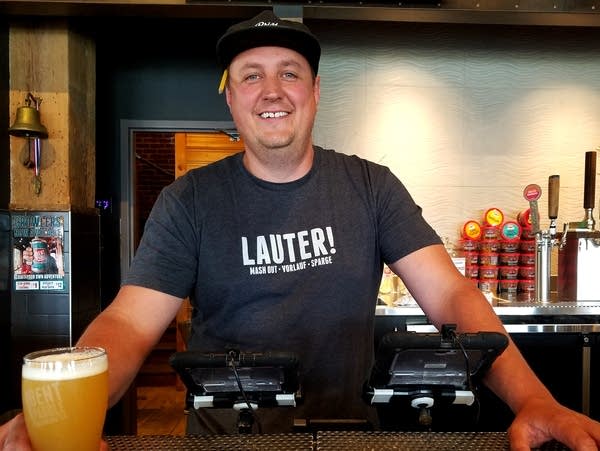 Pepin Young stands behind the bar at Bent Paddle Brewing Company in West Duluth. For Bent Paddle, supporting local music is a chance to promote the artists and the taproom.
Photo: Simone Cazares | MPR News

For many of these businesses, having local music is a chance to support the local music scene and promote artists in their community, but it also helps to promote the beer or cider they’re selling. For Bent Paddle, that means booking musicians who fit the vibe of the taproom.

“It was never about being a venue, per se, for music, [but] more so a place where artists can express themselves,” said Pepin Young, who manages the taproom at Bent Paddle. “As we’ve grown as a brewery and our taproom has grown, we’ve been reached out to by more musicians and we find more opportunities to include musicians to our daily life here in the brewery.”

Just a few blocks away at Duluth Cider, the music and the cider get equal billing. Some nights, owner Jake Scott said, it’s a cidery with music and other nights it’s a music venue with cider. Either way, he said, it’s important to him to make music a priority.

“From the outset, we knew that we wanted to have our taproom set up to have live music,” Scott said. “We didn’t know exactly what it would look like until we found the space ... but as soon as we saw this room, we’re like, ‘Well, we're going to build a stage and we’re going to be intentional so that we can host the music here.’” 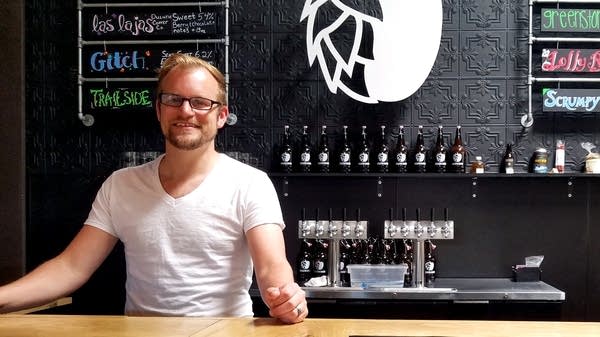 Owner Jake Scott stands behind the bar at Duluth Cider in July. Although the taproom has only been around for less than a year, it’s already gained a reputation as a place to see live music.
Photo: Simone Cazares | MPR News

Duluth Cider has been around for less than a year, but it’s already gained a reputation in town as a place to see bands. Music at the taproom ranges from standing-room-only ticketed concerts to more casual, smaller shows that enhance the atmosphere in the room each week. Scott said the cidery wants to continue supporting both types of live music as the business grows.

That’s part of the role taprooms, relative newcomers to the scene here, are playing in the already robust music landscape of Duluth, said Melissa LaTour. She’s been heavily involved in the local music scene as director of the city’s Homegrown Music Festival, a popular celebration of Duluth-based music.

She said she sees these newer venues as additive, not part of a zero-sum equation. They’re opening up new opportunities for bands to play — and make money — but they’re also introducing the casual listener to local musicians.

“You do have that crowd that comes in specifically for beer ,” LaTour said. For those customers, the music is simply part of the ambiance. But sometimes, she said, the music connects with them.

“If you watch some of them, they begin to see the music and hear it and they’re more curious,” she said, which could lead them to seek out the band — or more live music — in the future.

To read more of the original story and see related reporting, follow this link to the MPR News website.  https://www.mprnews.org/story/2019/08/30/cideries-breweries-tap-into-duluths-expanding-music-scene
Arts+Culture