The beach at the city-owned beach house near the end of Park Point is the only lifeguarded beach on all of Lake Superior. The Duluth YMCA provides lifeguards from 11 a.m. to 4 p.m. in the summer through Labor Day.  Photo: Dan Kraker | MPR News

A tragedy two years ago along Park Point in Duluth brought back painful memories for Gary Glass, 75, a retired EPA chemist who grew up along the 7-mile stretch of white sandy beach beyond the Aerial Lift Bridge.

As a kid, he swam all the time with his friends on the beach that juts into the crystal clear water of Lake Superior, Glass said. But in the third grade, one of his close friends drowned.

"That made a real impression on me at the time, and I didn't understand why somebody should drown, doing a fun thing," he recalled.


Years later, on Aug. 10, 2017, that same feeling returned when Ryan Fuglie and his 10-year old daughter Lily drowned after being swept away from shore by a powerful rip current.

The drownings focused a new sense of urgency in Duluth on longstanding efforts to educate the public about the dangers of rip currents in Lake Superior, and improve public safety.

But some argue that more needs to be done to make swimming on the beach safer.

"There sorely needs to be enhancements for lifeguard services on this point,” said Dennis Hoelscher, a retired police officer. “It just defies common sense and any basic rule of public safety."

Lifeguards are on duty from 11 a.m. to 4 .m. every summer day at the city-owned beach house near the end of the point. 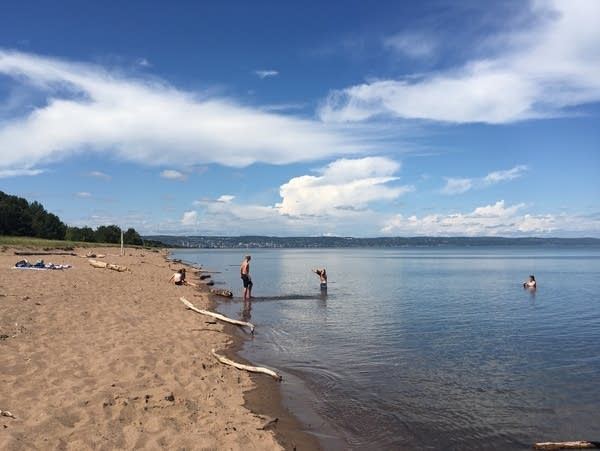 Kids splash in Lake Superior along Park Point, a 7-mile stretch of sandy beach in Duluth. Some residents have called for more lifeguards in the wake of two drownings in 2017.  Photo: Dan Kraker | MPR News

But lifeguards don't work on “red flag” days, when the Duluth Fire Department puts up red flags on Park Point to let swimmers know there's a high risk of rip currents, strong flows of water that move quickly and directly away from the shore.

But according to the Duluth YMCA, which runs the lifeguard program on Park Point, there's a good reason why lifeguards are pulled off the beach on days when the red flags fly.

"There’s some pretty strong research that says if a lifeguard is there, people think that it’s safe," explained Cheryl Podtburg, aquatics safety coordinator for the Y.

Two years ago, the waves crashing on the beach when the Fuglies drowned reached seven feet high — much taller than Podtburg herself.

"I would never want to go out and try and rescue somebody in 4-5 foot swells,” she said. “I don’t have that ability, I wouldn’t want to put myself in danger and create a worse situation."

The Y took over the lifeguard program on Park Point a decade ago, after the 2008 recession, when the city made steep cuts to its parks program.

It pays lifeguards by renting out the city-owned beach house and other facilities, and by selling concessions. At best, Podtburg said, the Y breaks even on the arrangement. Sometimes it loses money. But the organization believes it’s an important community service.

Duluth is far from alone. Across the Great Lakes, communities are grappling with how to pay for lifeguards. Park Point is the only beach with lifeguards on all of Lake Superior. Other communities around the lakes have also cut lifeguard programs because of budget constraints, said Jamie Racklyeft, who founded the Great Lakes Water Safety Consortium after he nearly drowned in a rip current in Lake Michigan in 2012.

But Racklyeft argues that’s short-sighted. Lifeguards, he said, save lives.

“If you have a search-and-rescue helicopter, dive teams and other first responders working 24 hours straight looking for a missing swimmer, that’s going to cost you a lot more than a whole season of trained lifeguards," he said. 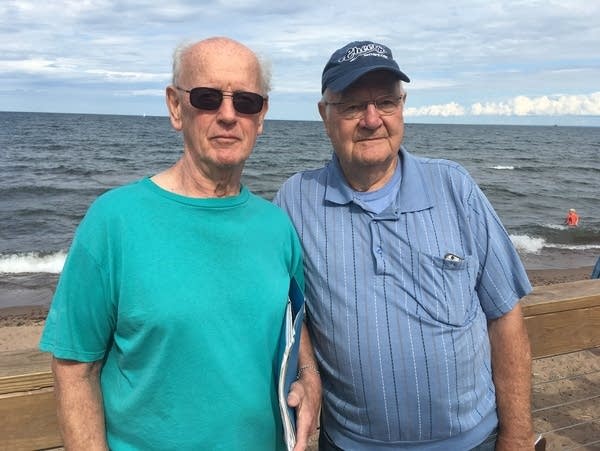 Dennis Hoelscher and Gary Glass, who live along Park Point in Duluth, have pushed for the past two years for more lifeguards on Park Point beaches. Photo: Dan Kraker | MPR News

Podtburg said the YMCA is in talks with the city of Duluth about potentially extending lifeguard hours until 7 p.m., and creating a beach safety team for red flag days.

"Their focus would be talking to people on the beach, and saying, ‘Hey, did you know [about rip currents]? Because this is kind of dangerous to be out here today,’" Podtburg said

The city is piloting the idea this summer. Park rangers have walked Park Point on nine red flag days, and made 120 contacts with beachgoers, said parks manager Jessica Peterson.

At a city parks commission meeting in May, Duluth director of public administration Jim Filby Williams called the lifeguarding services "unacceptably limited," and said the city needed to figure out a different way to pay for it.

Peterson said the city is negotiating with the YMCA to extend its contract, which expires at the end of this season.

The city’s challenge and “call to action,” she said, is “taking a really hard look at what options we have, and maximizing those for the best service we're able to provide within our resources.”

Duluth has been working to raise awareness about the dangers of rip currents in Lake Superior since 2003, after another tragic drowning.

A website was created with up-to-date beach conditions. There are signs at beach entrances, an electronic sign alerting drivers on Park Point, and education programs in the schools.

In addition, the Duluth Fire Department has added a boat and two personal watercraft to aid with water rescues.

But the 2017 drownings emphasized the need to better educate visitors to Duluth, who often underestimate the power of Lake Superior, said Jesse Schomberg with the Minnesota Sea Grant program.

So they put up a billboard along I-35, and trained workers in the tourism industry to educate visitors about rip currents and how to get more information about beach conditions.

That education is only going to become more important, said Schomberg, because of another factor: climate change.

"As water continues to warm in the summer, we’re going to have more folks going in the water,” he said. “That means there’s a greater risk of getting caught in these things.”

To read the original article, hear an audio report of this story and see related reporting, follow this link to the MPR website.  https://www.mprnews.org/story/2019/08/23/on-lake-superior-rip-currents-prompt-call-for-more-lifeguar...