In Duluth, a quest for a home for a historic replica Viking ship A replica Viking ship sailed from Norway to Duluth in 1927, the first ship of its size to make the journey across the Atlantic in modern times. The historic replica Viking ship is seen at the Festival of Sail in Duluth on Tuesday.  Photo: Dan Kraker | MPR News

On June 23, 1927, thousands of people lined the ship canal in Duluth to welcome a small sailing vessel that had departed Norway the previous year, navigated the North Atlantic, dodged icebergs off the coast of Greenland, and sailed through the Great Lakes to Minnesota.

Retired preschool teacher Julie Morgan of Duluth wasn’t there, but she can picture the scene, she’s heard the story so many times. Her father, Sid, was a 12-year-old boy waving at the ship as it passed under the Aerial Lift Bridge.

"He remembered the big crowd, and the excitement as they waited and waited, and finally they could see the sail coming. He felt very proud that day — and ever after — of this ship."

Morgan is among a group of volunteers raising money for a place to publicly display the ship in the city that became its home after Norwegian captain Gerhard Folgero successfully replicated the voyage of legendary Viking explorer, Leif Erikson, to North America.

This was decades before archaeologists found proof that Viking sailors had indeed made it across the Atlantic. 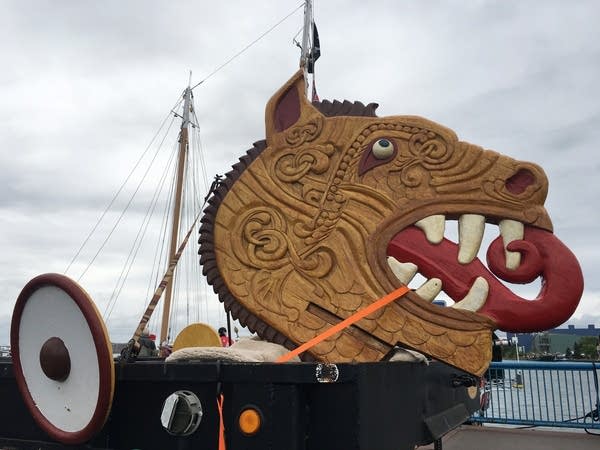 A replica dragon's head card for the bottle of the Viking ship in Duluth is on display Tuesday.
Photo: Dan Kraker | MPR News

Folgero built a 42-foot-long wooden ship with a carved dragon's head on the bow, shields lining the sides, and a square, white and red striped sail.

He recruited a crew of three men. Accompanied by two dogs, they made it all the way to the eastern U.S. with "no radio, no motor, all by sail,” marvels Neill Atkins, co-chair of the group working to restore and find a permanent home for the ship.

"Everywhere they went, tens of thousands of people came out to see the boat,” he said. “This was a big deal back then."

No one had ever crossed the Atlantic before in such a small ship.

Two Duluth businessmen bought the boat for $5,000, and donated it to the city, where it was displayed at the shore of Lake Superior, in a park renamed after Leif Erikson.

Exposed to the elements, the wooden ship began to rot. In the 1980s, when Atkins served on the Duluth City Council, he recalled someone proposing to burn the ship, just to get rid of it.

"So, my buddy Will came to the council meeting dressed as a Viking with a battle axe, and thumped it on the podium and said that the Vikings will rule if something isn't done with this ship."

In 1985, Atkins and others started the group Save Our Ship, and slowly raised money to repair the historic craft.

"It was so rotted out, the center section, you could walk underneath it and stand up and put half your body inside the ship through the holes in the bottom,” said volunteer Dwight Nelson, who worked for the city parks department at the time.

Now Nelson says the ship is in “great shape,” complete with a hand-carved replica of the original dragon's head to mount on the prow.

Six years ago, Save Our Ship pulled it out of Leif Erikson Park, where it was tightly wrapped in plastic to protect it from the weather. Now the vessel sits in a warehouse.

The group has raised about one-third of the estimated $400,000 needed to build a glass encasement to put the ship on public display. That includes $60,000 pledged by the city of Duluth.

"It was a miracle they made it, but they showed what is possible with human endeavor. So, it’s got to be preserved,” said Nelson.

“There’s no value that can be placed on the worth of this ship. If it was ever destroyed, it could never be replaced."

To read the original article, hear an audio report and see related reporting, follow this link to the MPR News website.  https://www.mprnews.org/story/2019/08/13/in-duluth-a-quest-for-a-home-for-a-historic-replica-viking-...