In the grand scheme of things, Michigan’s Upper Peninsula isn’t very big. The jagged, 26,000-square-mile jut of land—mostly wild—separating Lake Superior and Lake Michigan is rarely a priority for any global brand. But last month, Bugsy Sailor, who runs the Upper Peninsula Twitter handle, called out Mountain Dew for mistakenly making the UP a part of Wisconsin in its “Dewnited States” campaign launched in June.

Change of plans... @MountainDew do you want to gain a bunch of fans?

Fix this, or send a free case to all my residents. Your call. 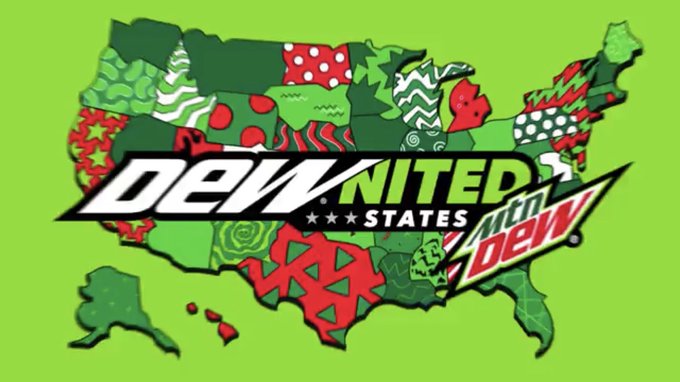 Hey, Upper Peninsula: we hear you, and we’re sorry for misplacing you on our #DEWnited map. Give us a chance to right our wrong. Help us fill this special edition label by telling us all of the things you love about the Upper Peninsula (note to self: located in MICHIGAN)

The UP is obviously colored in the green and white of Wisconsin, not the red of Michigan in the graphic.

Getting called out this way made PepsiCo, Mountain Dew’s parent company, sit up and pay attention. It could have responded in a number of ways, but the brand quickly decided not only to take Sailor up on his triple dog dare to create special-edition UP labels, but Dew also decided to launch them at an event at Sailor’s Upper Peninsula Supply Co. store in Marquette on Sunday.

Then on Monday, the brand set up camp at the Upper Peninsula State Fair to atone for its geographical sins by giving some of the fair’s 90,000 attendees the chance to dunk Dew employees into a dunk tank, while giving away thousands of free products and swag.

Why all the effort for a northern outpost of barely more than 300,000 people? Mountain Dew VP of marketing Nicole Portwood says it comes down to an approach to fan and customer engagement that revolves around the idea that every single one matters. “They’re the ones buying your product, and those individual decisions to buy your product in aggregate is what determines whether your brand grows or fails,” says Portwood. “In our social media world, even the smallest spark can start a raging forest fire. You have to treat it very seriously.”

Every piece of marketing you see from a major brand is a result of countless meetings, along with a pile of logistics in terms of the media buy, scheduling, and all the other ways the advertising sausage is made. That was all thrown out the window when the UP error was called out.

Portwood says her first reaction was, “Oh no, we have to fix that.”

“Don’t get me wrong, the logistics to fix the TV commercial and digital content was incredibly complicated, but when you’re putting your fans first, that’s what you have to do,” she says. “You have to be honest when you make mistakes, and be vulnerable enough to ask for help to make it right.”

Sailor says when he first called the brand out, he knew he’d get a response from locals. “Outside of that, I figured it would get lost in the abyss of the Twitterverse,” he says. “However, the retweets and comments didn’t stop. It kept growing and growing, with over 800,000 tweet impressions. I have enough marketing and communications experience that I began to recognize this crossed a threshold where they almost have to respond.”

Respond, sure, but he didn’t expect how they’d take their apology this seriously.

“I never imagined a custom Upper Peninsula Mountain Dew label,” says Sailor. “By producing the bottles and getting them into the hands of Yoopers (for free!) through Upper Peninsula Supply Co. and the Upper Peninsula State Fair, I’m certain they impressed quite a few of us. It’s incredible to see a nationally recognized brand turn this into something fun for our community. Beyond that, they’ve taken the time and care to do it right.”

To create the new UP labels, Portwood and her team asked those commenting on Sailor’s original tweet for ideas, and then got Sailor, a graphic designer by trade, to help work on it.

Beyond the significance of acknowledging the mistake and working to make it right, the next most important thing here was speed. The brand was in touch with Sailor within a day and working on a solution immediately. Waiting too long or allowing corporate bureaucracy to get in the way would have meant a missed opportunity.

“PepsiCo is an enormous organization and [has] complex processes when it comes to all the various disciplines that have to come together to make something like this happen,” says Portwood. “The truth is, had we tried to commercialize this label, get a UPC code on it and put it up for sale, that would’ve been an enormous task that’s not possible. So having everyone understand what we can and cannot do, from a timeline perspective, is really important in this whole thing. But also just setting the standard and putting everyone’s antennae up to prioritize this kind of thing.”

Brand Twitter is (rightly) trolled often for how it tries to imitate being a real person, but here Portwood and Mountain Dew took that idea and made it into something unexpected and fun. “I think it’s important that we’re constantly reminding people that there are real human beings who make this stuff, and the more we can behave like that, the more powerful the connection is with our fans,” she says. “In this case, that means showing up.”