Tall ships return to Duluth for Festival of Sail The U.S. Brig Niagara and the Roseway approach a crowd of viewers and the ship canal during the Duluth Tall Ships festival parade on July 29, 2010 in Duluth. Tall ships will return to Duluth this week for the Festival of Sail.  Photo: Clint Austin | Duluth News Tribune via AP 2010

A parade of tall ships is set to pass beneath the Aerial Lift Bridge in Duluth on Sunday morning, kicking off the Festival of Sail.

It's the first gathering of tall ships in Duluth in three years, and tens of thousands of people are expected to attend the event that runs through Tuesday. City officials said they expect it to bring more visitors to Duluth than any other single event this year.

Among the ships on hand will be the U.S. Brig Niagara, a replica of a two-masted warship that took part in the War of 1812. The present ship incorporates some timbers from the original ship.

Christopher Cusson, captain of the Niagara, said it's that sense of history that draws many people to the tall ships.

"It's something that's a connection to something that was," he said, speaking by phone while the ship was out on Lake Superior. "(With) a lot of people's family histories, it's how they got across oceans to get to North America. I think there's a deep connection there. As well as — they're really cool to look at. I think they're pretty impressive when you're alongside or on board, and each one of them has a unique story." 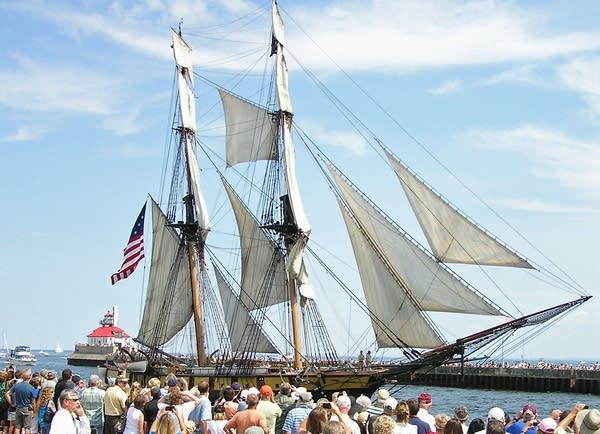 At least five other tall ships are expected to take part in the festival, lining the harbor near the Duluth Entertainment Convention Center and Canal Park. Find more event information here.

Cusson said the stop in Duluth — one of several tall ships events taking place this summer around the Great Lakes — is a highlight of the season for the Niagara's crew of 33, a mix of professionals and volunteers.

Duluth previously hosted tall ships festivals in 2008, 2010, 2013 and 2016. Several tall ships operate on a three-year circuit, cycling among the Great Lakes, the East Coast and the West Coast.

City and state officials cautioned drivers to prepare for heavy traffic on Interstate 35 to and from Duluth in the coming days, as well as traffic congestion and street closures near the festival in Canal Park.

To read the original article and see related reporting, follow this link to the MPR News website. https://www.mprnews.org/story/2019/08/10/tall-ships-return-duluth-festival-sail