Waves crest is just a few feet below the Aerial Lift Bridge on Oct. 10, 2018, in Duluth. Water levels in the Great Lakes have reached record or near-record levels all summer. It's caused significant damage along the shoreline..  Photo: Derek Montgomery for MPR News 2018

The city of Duluth has learned the hard way these past few years just how powerful Lake Superior can be.

And then last October, a third storm hit — the biggest one yet.

The city’s popular Lakewalk pedestrian and biking path, just blocks from the heart of downtown, was especially hard-hit after being hammered repeatedly by the storms. 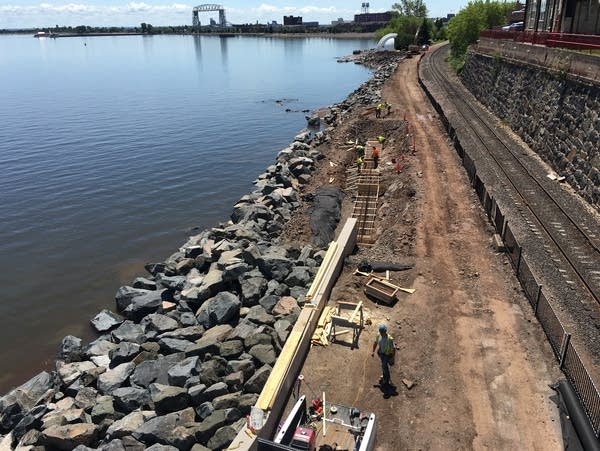 Crews are rebuilding a stretch of the Lakewalk behind the Fitger’s building in downtown Duluth on June 28, 2019. The Lakewalk suffered severe damage from three major storms that have hit the city over the past couple of years.  Photo: Dan Kraker | MPR News

The boardwalk itself withstood some structural damage, but it didn’t stop there. LeBeau ticked through the weather’s impacts: “It undermined the buried electrical wiring for the lights, tipped over some lights, flipped the boardwalk sections up near the hotels, even."

And it eroded away acres of land, upending large boulders that had been put in place to protect the Lakewalk and tossing them easily out into the water.

Lake Superior's gales are legendary. But the high water levels, LeBeau said, have made these recent storms even more destructive. The city has estimated damage from the three storms, in less than two years’ time, at nearly $30 million.

It's a similar story elsewhere around the Great Lakes, where beaches have disappeared, docks are submerged, and lakeshore is eroding.

But the higher water levels have been a boon for the shipping industry. That's because deeper water allows ships to carry more cargo.

"A great example of this is a vessel like the Edwin H. Gott, which can carry an additional 267 tons of iron ore per extra inch of draft,” said Jayson Hron, spokesperson for the Duluth Seaway Port Authority.

"That’s something like $26,000 worth of extra ore per inch, so if you multiply that by 2 or 3 inches of water level, and then multiply it by more than 30 trips over the course of a shipping season, it adds up to some significant benefits,” he said.

Only six years ago, the shipping industry was complaining about record low water levels.

"There really isn't a period of below-average water levels in the record for quite that long a time period,” Gronewold said. Great Lakes water data goes back a century.

"It was a very rapid transition,” Gronewold said, “one of the most rapid water level increases in history." 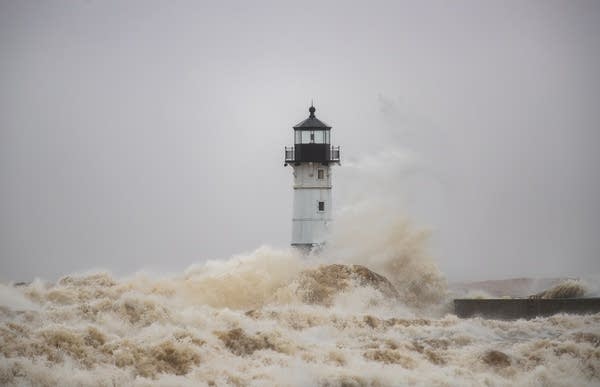 That rise has continued into this summer: Lakes Erie and Ontario have reached their highest levels ever recorded, and Lake Superior has set new monthly records.

This time, the spike in water levels was driven largely by an increase in rain and snowfall — over the Great Lakes themselves, and on the surrounding land that runs off into them — said Lauren Fry, a hydrologist with the U.S. Army Corps of Engineers’ Detroit district.

“Over the past six years, we’ve had above-average water supply more often than not,” she said, “so, it’s been an ongoing building of high water levels, culminating this season.”

Increased precipitation, including more extreme rainstorms, is one of the chief signs of climate change in the Upper Midwest, Gronewold said, since the warmer atmosphere holds more moisture.

But the water level rise also coincided with some extremely cold winters, including the cold snap in 2014 caused by the “polar vortex,” which produced record-breaking ice cover on the Great Lakes. And that, in turn, slowed down evaporation rates. Because the ice was so thick and so comprehensive, it took much longer to melt than usual.

On the one hand, said Gronewold, “precipitation is going up, with more severe events.” But on the other hand, evaporation is also likely to increase again at some point.

He calls it a tug of war — with both sides pulling more strongly.

To read more of this story and read related environmental reporting, follow this link to the MPR News website.  https://www.mprnews.org/story/2019/08/01/in-great-lakes-high-waters-cause-headaches-uncertainty