Beware boaters and swimmers: High winds in areas on the Great Lakes this weekend The National Weather Service has issued a Great Lakes alert for high waves and strong currents,  which present dangers for boaters and swimmers, for west Michigan beaches from midnight Friday through Saturday evening.

The weather service said high waves , strong currents and dangerous swimming conditions will be around until Sunday.

South-to-southwest winds with gusts generally less than 15 knots (17 mph) will increase Saturday ahead of an approaching cold front. Winds Saturday will reach up to 20 knots (25 mph) with gusts up to 25 knots (nearly 30 mph,) especially across Saginaw Bay into the Lake Huron basin. There, conditions may become hazardous for small crafts, the weather service said.

"As the winds travel farther north, the winds will also create waves and dangerous currents such as long-shore currents, rip currents and structural currents," Benjamin said. "The south sides (windward sides) of all piers will be the most turbulent and dangerous spots on Lake Michigan."

Water rescue crews continue to search for Brian Herrmann, 38, who went missing Thursday after he, his wife and their two children were swept into Lake Michigan from the mouth of the Big Sable River at Ludington State Park in west Michigan.

Herrmann is the second swimmer to be reported missing this week at the park, which is northwest of Grand Rapids.

Since July 18, a 14-year-old girl and 18-year-old man have died in separate swimming incidents near the park.

Isolated thunderstorms may occur during the dry weather that's expected through the weekend. In Metro Detroit, Saturday will reach a high of 88 and Sunday will reach 89, both days expected to see more than 50% humidity.

On Sunday, winds decrease out of the southwest. Chances for thunderstorms will increase on Monday ahead of a stronger cold front tracking east across Lake Superior.

A few strong to marginally-severe storms with gusty winds are possible late Saturday mainly across the Tri-Cities and northern Thumb. #miwx 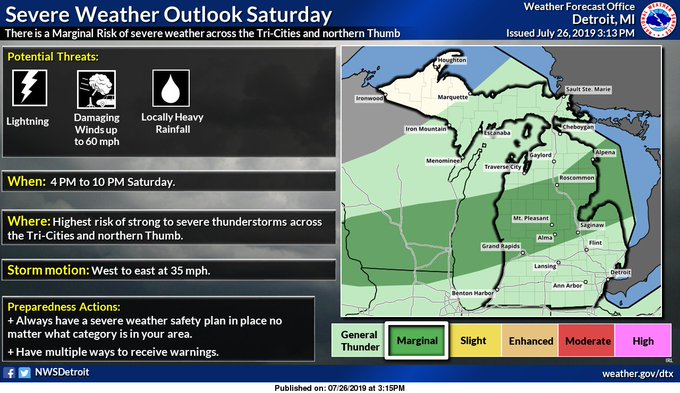 Beachgoers and others, experts say, are often unaware of the sea-like characteristics of the lakes and how quickly surf conditions can change. Sustained winds and rolling waves, along with structural obstructions, can create dangerous currents, even along the shoreline.

Frequently, swimmers ignore Michigan’s flag-warning system, which lets beachgoers know when it’s safe to swim. A red flag means stay out of the water and remain on the beach.

■Red = STOP. Stay out of the water and on the beach.