In this June 13, 2012 file photo, Asian carp jolted by an electric current from a research boat jump from the Illinois River near Havana, Ill. Photo: John Flesher/The Associated Press

The threat of Asian carp in the the Great Lakes should concern everyone, according to the American based National Wildlife Federation (NWF).

Governors and premiers from the Great Lakes states and provinces recently agreed to support a binational plan to stop the invasive species from gaining access to Lake Michigan. Congress must now approve the project before it can move ahead.

But, there isn't musch time to waste, said Drew YoungDyke, a NWF spokesperson.

YoungDyke said if they are not stopped, the fish will spread throughout the Great Lakes, moving north as far as Lake Superior.

He said the relatively cold water of the big lake isn't a deterrent for the voracious feeder.

"Asian carp, their native range, where they are from, is above the latitude we are at, even on Lake Superior," YoungDyke said. "It's really the water conditions they find, and the food availability they find."

YoungDyke said the term Asian carp, includes four different species of invasive fish. These fish include silver, bighead, black and grass carp. He said each of the fish has a slightly different impact on the native eco-system and generally eat all the plankton, which is the base level of the food chain. This starves out the native species further up the food chain. 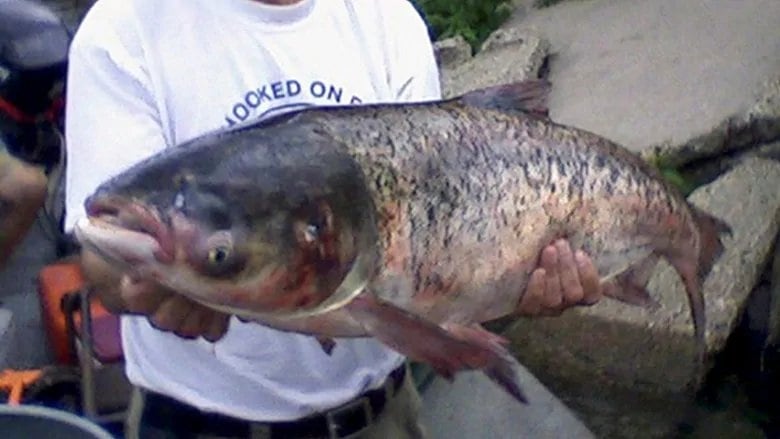 Asian carp first started showing up in North America in the 70s, when they were brought in for the aquaculture industry in the U.S. If they find their way into the Great Lakes, they will threaten the 7 billion Great Lakes sportfishery and eco-system.  Photo: Illinois Department of Natural Resources

Asian carp made their way to North America through aqua-culture.

The fish "were originally imported into southern aqua-culture facilities, especially in Arkansas," YoungDyke said. "They escaped through flooding and escapements, to get into the wild waters of the Mississippi River basin. From there they have spread out, making their ways toward the Great Lakes as well as west and east."

YoungDyke said Asian carp have been found in waterways from Louisiana to Minnesota and from Tennessee to North Dakota. He said so far, the Asian carp have not managed to get into the Great Lakes, with the exception of some grass carp in a river connected to Lake Erie.

YoungDyke said the two Asian carp species researchers are most concerned about are the bighead and silver carp. Both species are known to have a voracious appetites and where they have taken over rivers, they now occupy up to 90 per cent of the bio-mass in that stretch of water.

Silver carp are also notorious for flying out of the water when disturbed by an outboard motor or other sound. This habit also makes the fish a health and safety concern to boaters.

The coalition's binational plan centres on rebuilding the Brandon Lock and Dam south of Chicago, Illinois.

YoungDyke said the U.S. Army Corps of Engineers wish to use a variety of auditory and physical blocks at the site to try and keep Asian carp out.

A total of eight Great Lakes state governors have approved the plan to rebuild the Brandon Road Lock and Dam. Both Quebec Premier Francois Legault and Ontario Premier Doug Ford support the plan as well.

YoungDyke said if Asian carp do enter the Great Lakes, the $7-billion sport fishery and tourism economy of the various communities on the lakes will be in grave jeopardy.

To read the original article and read related reporting, follow this link to the CBC Thunder Bay website.  https://www.cbc.ca/news/canada/thunder-bay/lake-superior-not-immune-to-asian-carp-threat-says-nation...