The Kawishiwi River flows near Ely, Minn., in June. Twin Metals Minnesota plans to set up its copper-nickel mining operations along the river's banks, just to to left.
Photo: Derek Montgomery for MPR News

The developer of a controversial mine proposed to be built on the doorstep of the Boundary Waters says it will use a new, potentially safer method of storing mine waste than what is typically used in similar mines.

Twin Metals Minnesota announced Thursday it intends to use an approach known as “dry stack” to store the finely ground tailings — rock that’s left behind after extracting valuable minerals from ore the company hopes to pull from an underground mine outside Ely, Minn. The Twin Metals project would be located near the shore of the South Kawishiwi River, about 8 miles outside town.

Twin Metals announced the project update Thursday, months ahead of the anticipated release of its formal mine plan of operation, which will trigger a long environmental review and permitting process. 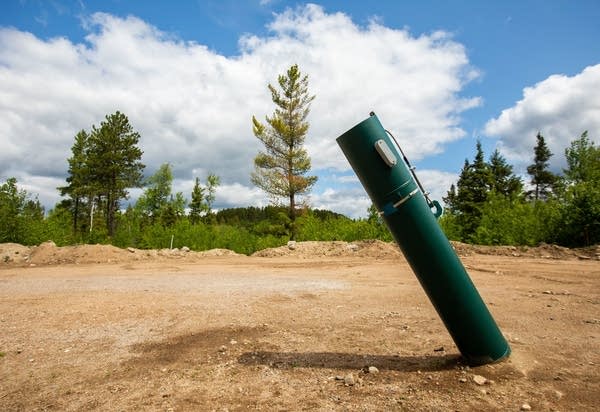 A hydro well sits in a cleared-out area of forest near Ely in June. The well reaches 2,300 feet below the surface to the ore deposit that Twin Metals plans to mine, and will be used to obtain water samples throughout the mining process.  Photo: Derek Montgomery for MPR News

The announcement is significant because environmental groups pushed another company, PolyMet Mining, to use dry stacking at the copper-nickel mine it is planning to build just south of the Twin Metals site in northeastern Minnesota, saying it’s the best available technology to protect northeastern Minnesota’s water-rich environment from potential pollution.

PolyMet so far has opted to use the more traditional tailings basin method, in which the leftover mining material is mixed with water and slurried into a large pond, held back by a massive earthen dam. State regulators have already approved the PolyMet project, which would become Minnesota’s first copper-nickel mine.

But Twin Metals’ new proposal is still getting pushback from the project’s opponents because of where the waste would be located. Until now, the company had planned to transport about half its tailings to a new, conventional tailings storage facility it would build near Babbitt, Minn., outside the watershed of the Rainy River and the Boundary Waters Canoe Area Wilderness. The remaining tailings would be cemented in place underground to refill the mine after the ore is removed.

Under this new plan, about half the tailings would still be stored underground. But the remaining tailings would be stored in a huge lined pile — the “stack” of “dry stack tailings” — near the mine’s processing plant, just a couple miles from the southern edge of the Boundary Waters, and within the wilderness area’s watershed.

"That unacceptable risk is in no way reduced by today’s announcement,” she added, “and is actually made worse by the fact they are putting the tailings basin right next to the Wilderness.”

Location has been a major point of contention for groups fighting the proposed mine, because any polluted runoff from the site would flow directly into the BWCA, which opponents fear could degrade one of the nation’s most popular and pristine wilderness areas.

But Twin Metals officials argue that dry stack tailings storage is the best available technology in the mining industry.

“There’s no dam, no risk of failure,” said CEO Kelly Osborne. “[It’s] the most environmentally friendly tailings management approach for our site.”

The industry group Jobs for Minnesotans applauded the move Thursday, saying in a statement that it was “an example of what responsible companies do: listen to and consider the counsel provided by regulators, tribes, communities, industry and organizations like ours, configuring their projects to accomplish both environmental protection and economic feasibility.”

But that design has come under heightened scrutiny in recent years, following the catastrophic failures of tailings basin dams in 2014 at the Mount Polley copper and gold mine in British Columbia, Canada, and two dams at iron ore mines in Brazil, in 2015 and earlier this year.

Those disasters released torrents of liquified mine waste, severely polluting downstream lakes and rivers, and in the case of the Brazil dam collapses, killing nearly 300 people.

An expert panel convened by the government of British Columbia after the Mount Polley disaster recommended a move away from the conventional method of storing tailings in ponds behind massive dams, and toward best available technologies, including dry stacking.

“Improving technology to ensure against failures requires eliminating water both on and in the tailings,” the panel noted in its report, released in 2015.

Dry stacking involves filtering out most of the water from the tailings after mineral concentrates  — copper, nickel and precious metals like platinum and gold — are processed. The water is then recycled back into the processing plant.

Twin Metals then plans to stack and compact the finely ground tailings, which by then would be the consistency of sand, into a hill about 120 feet tall at a site near the processing plant. The “stack” would be built on top of a liner, maintained by a system designed to capture moisture that seeps from the structure, and eventually would be reclaimed with native soil and vegetation.

Mining experts say there are key environmental advantages to dry stacking tailings. First, it would eliminate the chance of a catastrophic dam failure, like what occurred at Mount Polley.

Second, it offers a better chance of eliminating the need for long-term or perpetual water treatment after a mine closes, because it reduces seepage from the tailings into nearby groundwater or surface water.

Even environmental groups fighting the proposed PolyMet and Twin Metals mines have made similar arguments.

“I would go so far as to say that [dry stacking] would address the vast majority of the concerns that we have for these facilities,” Kevin Lee, a staff attorney at the Minnesota Center for Environmental Advocacy, said in a debate over copper-nickel mining in Minnesota published last year by the Citizens League.

MCEA and other groups have pushed for state regulators to analyze dry stack tailings storage for the proposed PolyMet mine.

But when the Minnesota DNR issued PolyMet’s final permits in late 2018, it endorsed the company’s plans to use a more conventional tailings dam and wet storage approach, although the plan also included upgrades, such as rock buttressing to strengthen its tailings dam.

The DNR argued that, in wetter regions, dry stacking may not be an appropriate storage method for mine waste.

“Dry stacked tailings that become wet again (but are not submerged) are subject to oxidation and leaching of heavy metals. As precipitation then intermittently washes through the tailings, those heavy metals and other constituents may be washed into surrounding soils and nearby water bodies,” the agency wrote in its findings when it issued PolyMet’s dam safety permits.

Another challenge, state regulators said, is “fugitive dust,” which are particles that can be released when the dry tailings are transported by truck or conveyor to the disposal site. “This dust may contain reactive materials, such as sulfur, or heavy metals leached from the ‘dry’ tailings,” the DNR wrote.

Dry stacking has primarily been used in drier climates than Minnesota’s, principally because it uses much less water than conventional tailings storage.

But it has been successfully used at some mines in cold and wet locations, including two in Alaska: the Pogo gold mine, about 135 miles east of Fairbanks, and the Greens Creek silver and gold mine outside Juneau.

“We’ve researched those, we’ve worked with national and international engineering folks to work through these processes and gain the confidence about management in a climate like ours,” said Julie Padilla, chief regulatory officer for Twin Metals.

The mining industry is more actively discussing dry stack technology in the wake of the tailings dam disasters in Canada and Brazil. Even so, there are only a couple dozen dry stack facilities worldwide, out of thousands of mines.

That’s in part because the technology is significantly more expensive than other methods. One study released last year estimates it can be double or even triple the cost of operating a conventional tailings basin.

Padilla acknowledged the added costs. She said it would add about 50 jobs to the operation, increasing the total to an estimated 700, she said. But it would also eliminate the cost of building a long pipeline to a tailings basin that had previously been planned miles away outside Babbitt.

Copper-nickel mining project proposed for northern Minnesota have sparked a fierce debate between those who are eager to see the jobs and economic development they could generate in a remote part of the state, and those who fear the mines could poison precious lakes and rivers.

So far, two companies — Twin Metals and PolyMet — have formally proposed projects, although additional companies continue to explore the rich deposit of copper, nickel, gold and other precious metals in northeastern Minnesota known as the Duluth Complex.

The PolyMet project is the furthest along. The Toronto-based company, now majority-owned by the Swiss conglomerate Glencore, has already received all the state and federal permits it needs to build an open pit mine near Babbitt and refurbish an old taconite plant near Hoyt Lakes into a new processing facility.

But the project still faces multiple lawsuits, along with the prospect of raising an estimated $1 billion before it can break ground.

The PolyMet project
Twin Metals Minnesota is next in line. The subsidiary of Chilean mining giant Antofagasta wants to dig an underground copper-nickel mine along the shore of Birch Lake outside Ely, just south of the Boundary Waters Canoe Area Wilderness.

The project appeared dead in the water at the end of 2016, when the Obama administration refused to renew two key federal mineral leases for Twin Metals, and also recommended banning mining within the watershed of the BWCA for 20 years.

But the Trump administration has given the project new life, by reversing the decisions of the previous administration. Now Twin Metals plans to propose a formal mine plan of operation before the end of the year, which would kick-start a likely years-long environmental review and permitting process, and rekindle the debate over whether water-rich northeast Minnesota is the right place for this new and riskier kind of mining.

To read the original article, hear an audio report and see related reporting, follow this link to the MPR News website.  https://www.mprnews.org/story/2019/07/18/twin-metals-pitches-new-method-of-storing-waste-at-proposed...
News