Dead whales turn up with tons of plastic garbage in their bellies. Samples of lake-bottom sediment contain tiny plastic particles amid the granules of clay and sand.

Plastic particles have been found sitting on mountain slopes, suspended within lakes and embedded within the flesh of fish.

Now, scientists in northwestern Ontario are trying to determine how much plastic is floating around the air and water in Canada's pristine boreal forest — and maybe figure out how it winds up so far away from people and industrial activity.

"The thing that we keep finding out about microplastics is that they are wherever we look for them," said Mike Rennie, an assistant professor at Thunder Bay's Lakehead University. He's also a Canada research chair in freshwater ecology and a research fellow at the International Institute for Sustainable Development's Experimental Lakes Area (ELA) — a "natural laboratory" of 58 small lakes and their watersheds set aside for scientific research.
This summer, Rennie and other researchers at the ELA, east of Kenora, will start collecting data on the concentration of microplastics — that is, plastic particles smaller than five millimetres but larger than 100 nanometres — in lakes that sit at the top of the water table, free from industrial runoff.

He's expecting to find microplastics in lakes humans barely touch. What he and his colleagues can't predict is how much they will find. 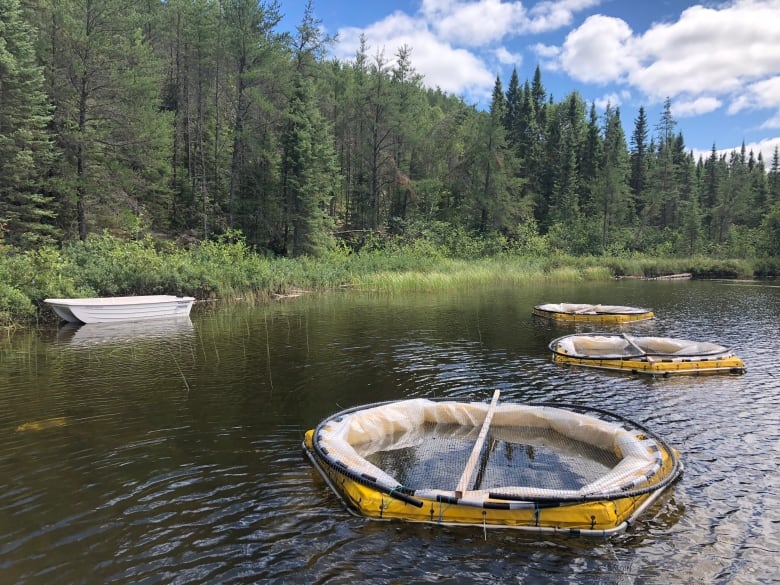 "We really don't know that piece yet, in terms of how that relates to the concentrations that we see in lakes, particularly in North America," he said. "We know these particles get transferred atmospherically."

Microplastics have already been found in significant concentrations in Lake Winnipeg, the world's 11th-largest freshwater lake, which drains a watershed that stretches from the Rocky Mountains in Alberta to South Dakota to the Atikokan area of Ontario.

Rennie said he was surprised to see microplastics show up in Lake Winnipeg in similar concentrations to those in Lake Erie, which is ringed by urban and industrial development.

The ELA is more remote than Lake Winnipeg, and its waters are not fed by any significant upstream sources. Rennie and his colleagues plan to monitor both the air and the water in these lakes to determine a baseline level of plastic pollution.

ELA researchers have amassed five decades' worth of data about lake chemistry, biology and meteorology to assist their interpretation of the new data about plastics.

"What we're doing currently is we're evaluating sort of background levels of plastics in the lakes," he said, adding researchers also hope to measure the rate at which airborne plastic is deposited at the top of the watershed.

We're still struggling to understand … the impacts. How dangerous is it?- Mike Rennie

The work will begin this summer. To follow it up, ELA researchers are applying for permission to add small quantities of microplastics to enclosures within a lake, known as mesocosms, to monitor the effects of the synthetic material on organisms.

The most elaborate version of the research would involve a whole-lake manipulation that could demonstrate what plastics do to the entire food chain within a lake.

"We don't have a really good understanding of that, particularly at environmentally relevant concentrations," he said. "But all that stuff is down the road."

For more than 50 years, scientists at the ELA have treated of lakes as living laboratories. ELA researchers alter the chemical or biological makeup of a small lake and monitor the results on the plants and animals that live within them.

Experiments at the ELA have resulted in discoveries about the role of phosphorus in promoting the growth of algae, and the effect acid rain has on the food web, among other findings.

Rennie said he hopes to discover how microplastics are affecting fish and other organisms, beyond the obvious esthetic concerns with plastic in the water.

Policy-makers are waiting to see the results of this work. Manitoba, for example, has an interest in learning the effects of microplastics on aquatic life as the province prepares to advise the federal government on its concerns about forthcoming plastics regulation. 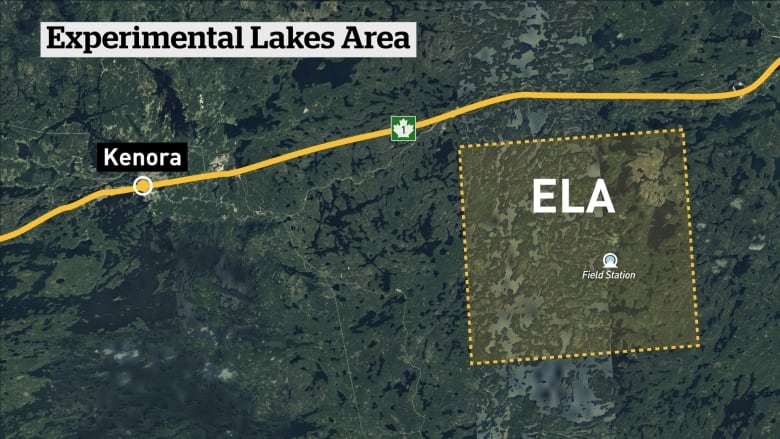 According to Manitoba Sustainable Development, the province doesn't monitor the presence of plastics in its water.

Neither does the City of Winnipeg. The city also doesn't have standards for removing microplastics from its waste streams, though plastics captured during the sewage treatment process are diverted out of the liquid effluent and into landfills, said spokesperson Adam Campbell.

Both the city and province say they're keeping an eye on the emerging science about microplastics.

"We now understand that it's pretty much everywhere, but we're still struggling to understand what are the impacts. How dangerous is it?" Rennie said.

"Hopefully some of the research that we're going to do, at least from the environmental perspective, will help to start address that." 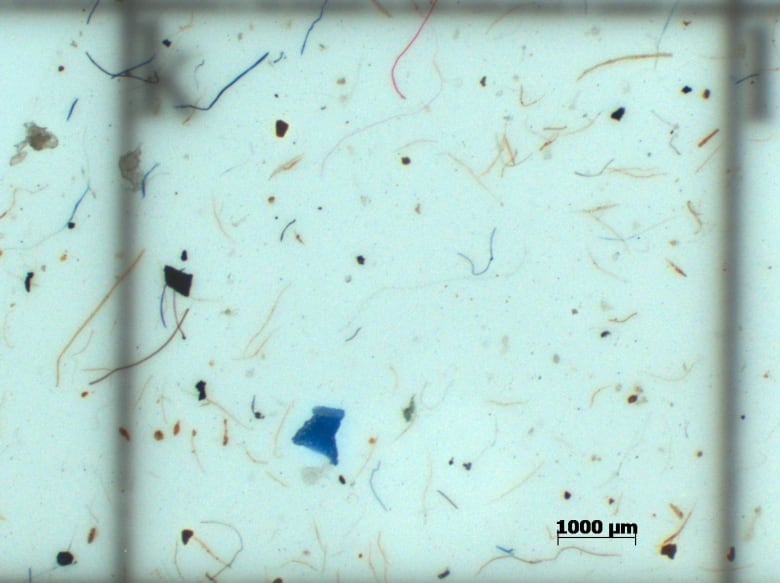 This water sample from B.C.'s Strait of Georgia yielded an average of 3,200 plastic particles per cubic metre of ocean. Photo: Vancouver Aquarium
ABOUT THE AUTHOR 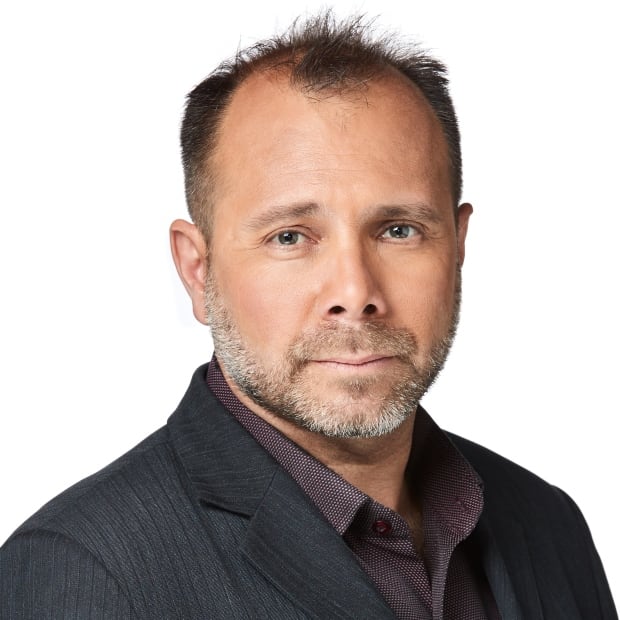 Reporter Bartley Kives joined CBC Manitoba in 2016. Prior to that, he spent three years at the Winnipeg Sun and 18 at the Winnipeg Free Press, writing about politics, music, food and outdoor recreation. He's the author of the Canadian bestseller A Daytripper's Guide to Manitoba: Exploring Canada's Undiscovered Province and co-author of both Stuck in the Middle: Dissenting Views of Winnipeg and Stuck In The Middle 2: Defining Views of Manitoba. His work has also appeared in publications such as the Guardian and Explore magazine.

To read the original article and see related reporting, follow this link to the CBC Thunder Bay website.  https://www.cbc.ca/news/canada/manitoba/experimental-lakes-area-microplastics-research-1.5206716
News