Cam Schaefer and Charlie the dog take a break on the Superior Hiking Trail. Supplied photo

Cam Schaefer's feet were so blistered by the final day of his 310-plus miles on the Superior Hiking Trail, he had to take his shoes off.

But he couldn't stop moving.

He'd traveled more than 40 miles each of the previous six days, battling through a knee injury on one leg and an Achilles tendon injury on the other. Schaefer was on track to reach his goal of beating the trail's record for a supported through-hike by more than a day.

So, a new footwear choice was in order.

"I'm gonna try flip flops," Schaefer said, and he wore them a couple miles on a touristy stretch of the trail's final miles through Duluth.

Beaten down and hurt, it paid off. Early Thursday morning, Schaefer completed the entirety of the Superior Hiking Trail in six days, 18 hours and 45 minutes — the fastest-known time for a supported through-hiker. 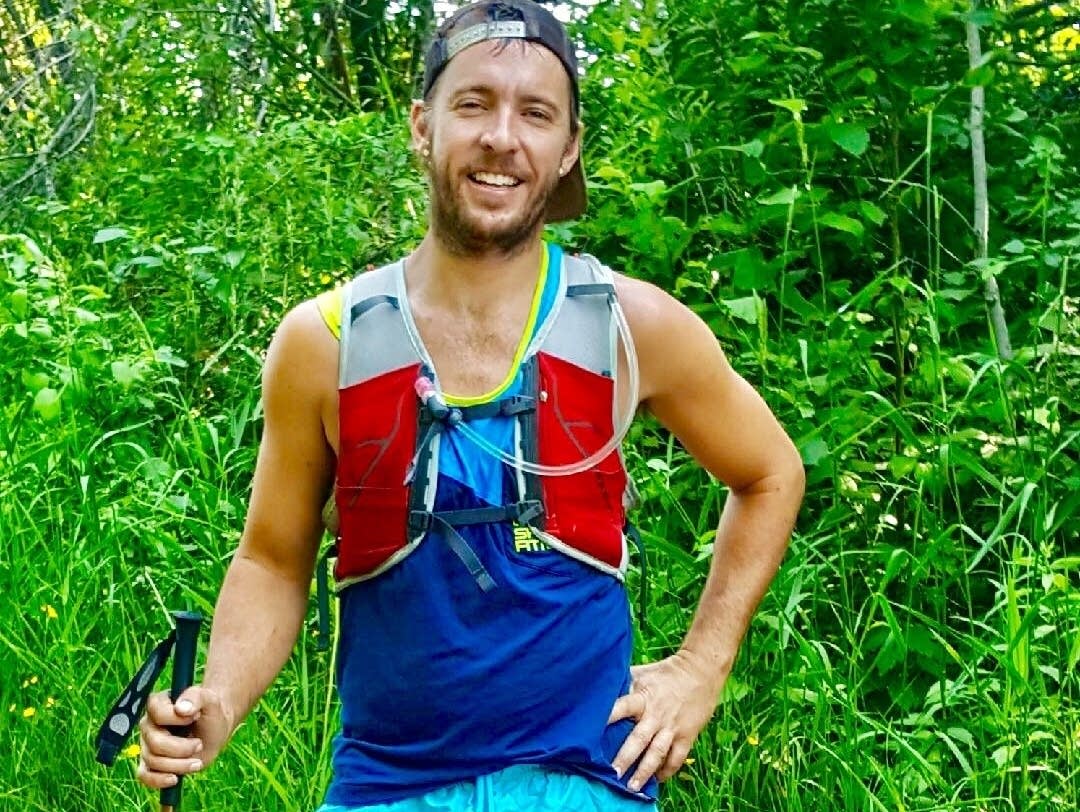 Through-hikers are a unique breed of outdoors athlete. Their aim is to complete entire stretches of long-distance trails on foot. Some are unsupported, going it alone with all necessary supplies, or self-supported, which involves arranging for support along the way before beginning the trip.

Schaefer did the Superior Hiking Trail supported, meaning he slept in hotels at night and got food, water and care from his girlfriend, Amanda Arnold, and mother, Paddy Ebling. They'd trace his route by car, meeting Schaefer every 10 to 15 miles where a road intersected with the trail.

The Apple Valley native began his trek on July 4 at the trail's northernmost point at the Canadian border, covering 47 miles the first day.

During the runs, he'd subsist on Lärabars or Clif Bars — the latter of which makes him sick to think about, having eaten so many.

On breaks, Schaefer laid down with his feet up. He'd eat peanut butter or salami-and-cheese wraps while Arnold filled his water or tended to his injuries.

For the first three days, Schaefer would stay on the trail until 7 or 7:30 p.m. Arnold would make him heartier dinners at night, like couscous with ground beef and sour cream.

He ate a pint of Ben and Jerry's every night before getting his few hours of sleep.

"I needed calories," he said.

But on day four, Schaefer woke up with a knee injury. From then on, he said, it was "sufferfest."

He'd lean on his better leg to take pressure off the bad knee. That helped the knee recover, but in turn gave him a bum Achilles.

His pace slowed from the injuries. He had to stay on the trail from sunrise to sunset in order to make his goal.

"I limped from day four on," Schaefer said. "I limped to the finish." But it was more like "speed-limping."

He got through. Schaefer and Arnold reached the trail's southernmost point together at 1:12 a.m. on Thursday.

This wasn't Schaefer's first through-hike. He's completed the Colorado Trail, the Pacific Crest Trail and the Appalachian Trail, too.

He and Arnold have spent the past couple years living in Aspen, Colo., holding down service industry jobs.

Growing up in the Twin Cities suburbs, Schaefer said he didn't spend a ton of time on the North Shore as a kid. He moved out of state after school and didn't know what to expect from the Superior Hiking Trail.

But said he was "pleasantly surprised .. borderline shocked" by the beauty of his home state.

There was one major downside, though, from a week of running through the woods.

To see the original article and read related reporting, follow this link to the MPR website.  https://www.mprnews.org/story/2019/07/11/apple-valley-native-sets-record-on-superior-hiking-trail
News