In Search of Isle Royale Moose … and Bones All photos by Loreen Niewenhuis

An adventure writer explores a truly wild place while it wakes up for summer—muck, mystique and all—in search of Isle Royale moose and their bones.

I snugged the straps on my 40-pound pack and followed our team leader already plunging down the steep, rocky ridge. To be safe, I kept my bum in contact with the rock face on the way down. I hoped the seat of my hiking pants was up for the challenge since I had only just met the team I was hiking with.

When we first reached the top of the ridge, I was surprised at how much snow persisted between the huge lichen-spotted rocks. In the ravines between the ridges, there were dense, cedar swamps to cross. This was an exercise in balance and grace, two qualities difficult to maintain with a full pack. I hopped from tree to tree, swinging out across deep, murky holes filled with icy water, slipping on mossy logs, stepping into deep mud.

Most of our hiking was off-trail since moose rarely die on-trail. Normally, visitors to this wild island national park will stay on the trails and have an easier time of it.

All over the island, we passed evidence of moose: large piles of pelleted scat. And we saw an occasional wolf track in the mud, doglike, but enormous.

By the end of my first day, my legs were rubbery from exertion after only a 9-mile hike. After dinner, we dispersed to our tents. I writhed my sore body into my sleeping bag and fell into an exhausted sleep. In the middle of the night, I woke to a strange sound. It was rising and falling, a primal howl: wolves calling to each other in the depths of the night. It chilled and exhilarated me, forever defining the sound of wilderness.

This was my first trip to Isle Royale, early in May, six years ago. 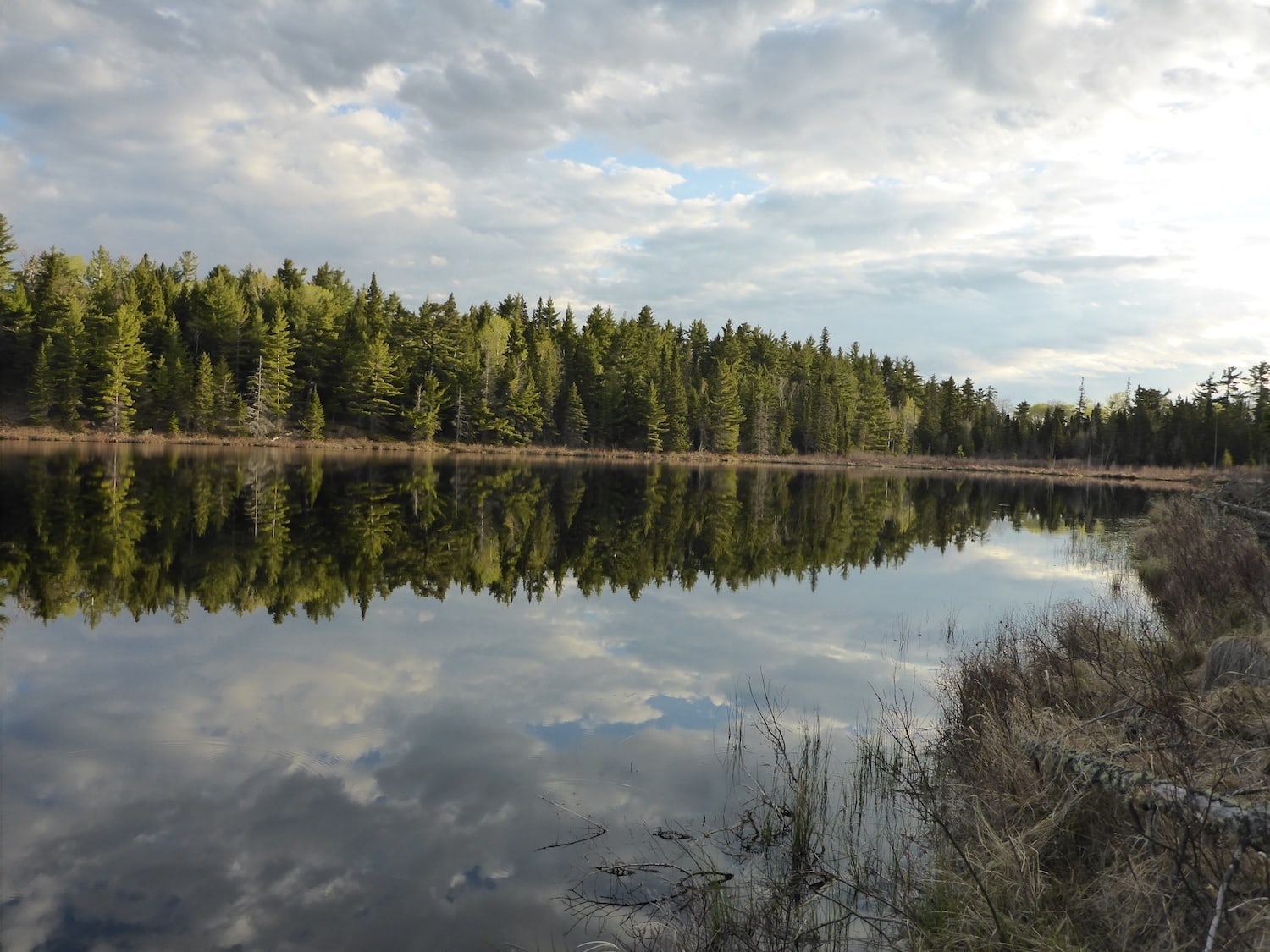 Volunteer hikers have traveled to Isle Royale since 1988 to contribute to the wildlife study based there since the 1950s. There, under the guidance of scientists from Michigan Technological University under the leadership of Dr. Rolf Peterson, teams of hikers embark on a macabre, wilderness scavenger hunt. They search all over this rugged island isolated by the waters of Lake Superior … for moose bones.

It’s difficult to convey the joy of finding a moose bone. While hiking the rugged terrain you must scan the area for a glimpse of white. You resent birch bark resembling bone and patches of snow resembling bone. Nothing satisfies except real bone, and when you see it, you yell, “Moose bone!” Your team gathers, grinning at the find.

There is also an element of friendly competition between volunteers: which team will bring back the most skulls? Or have the best story? Or meet the most live moose? 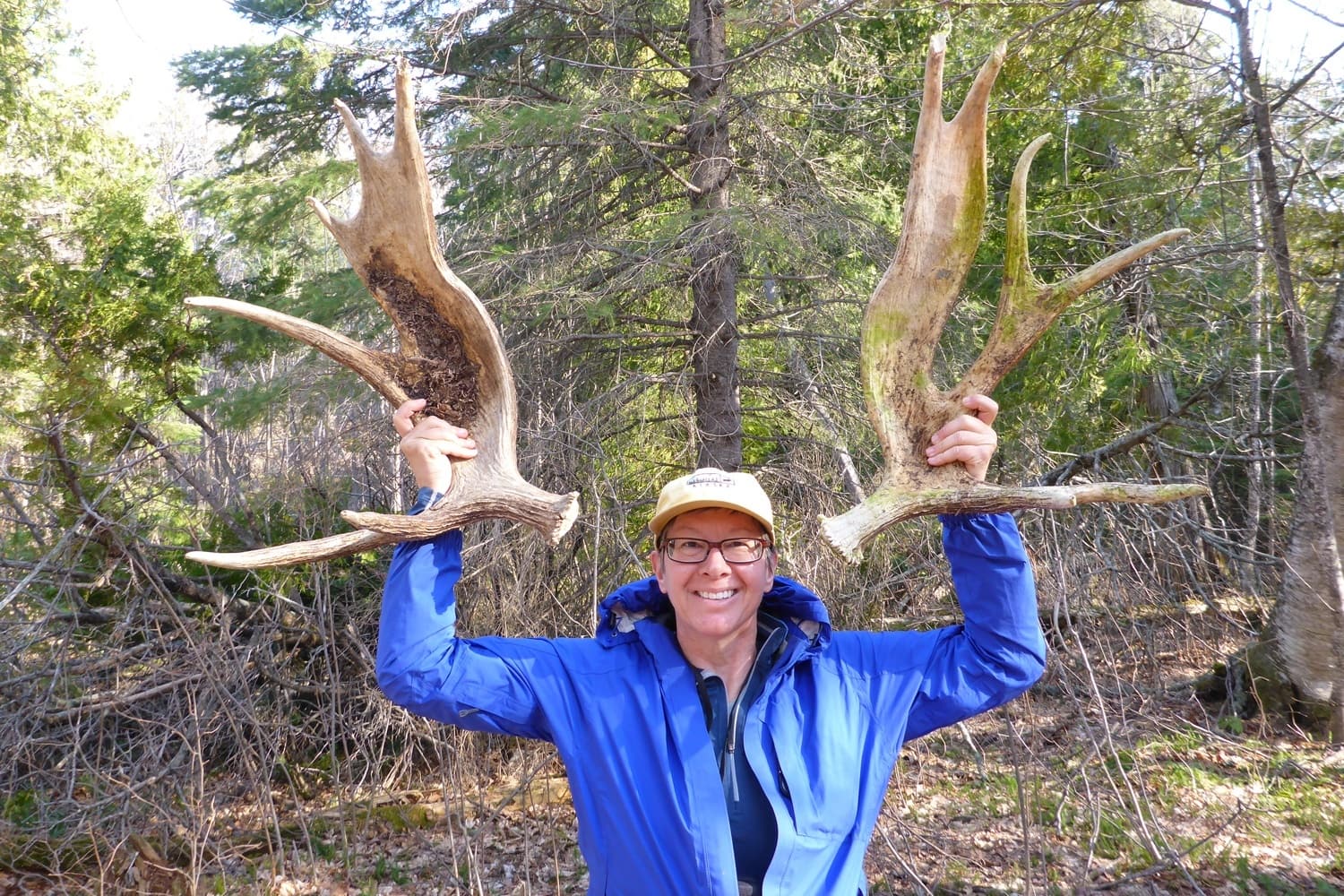 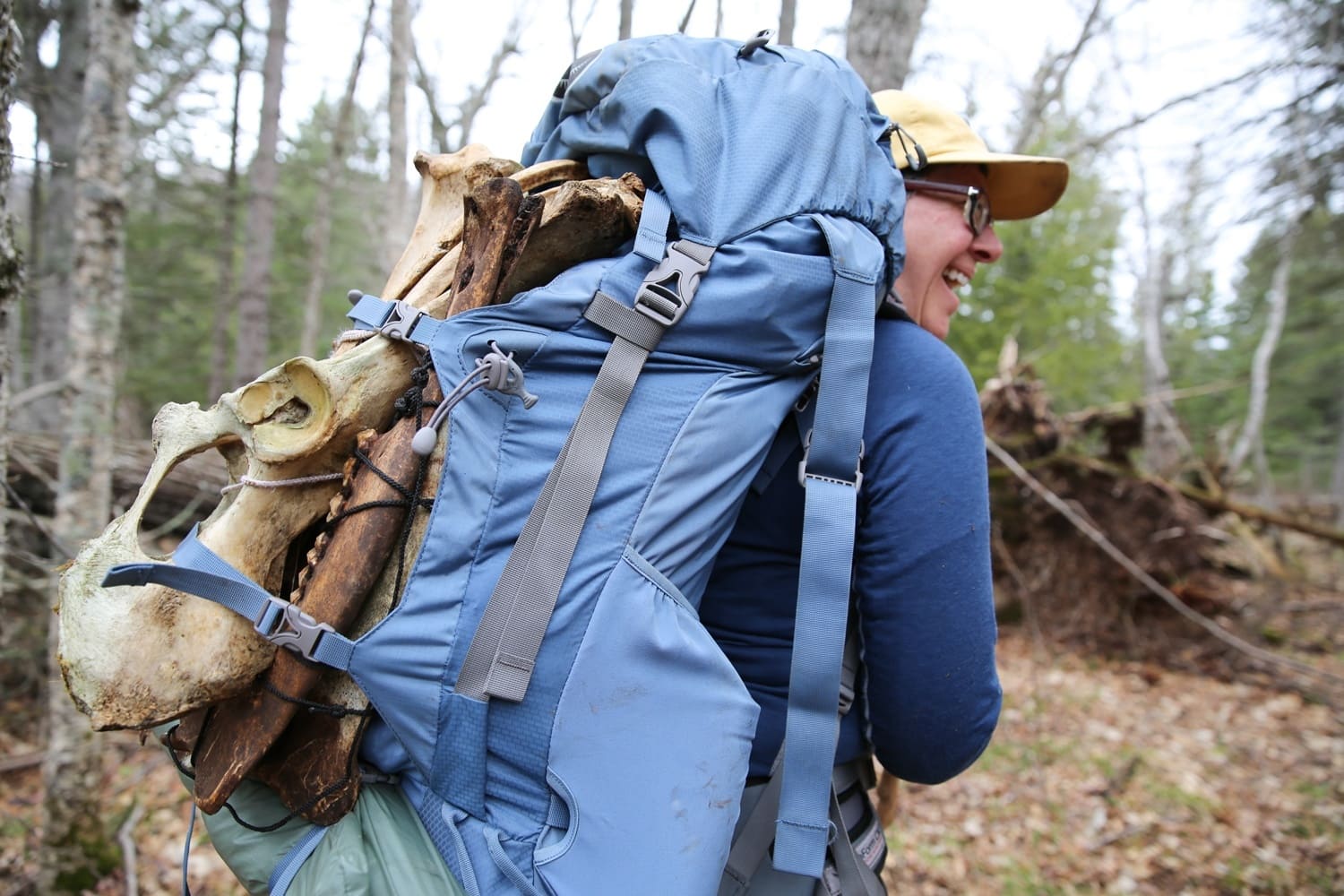 Transporting bones back to scientists

When a team finds a bone, they search the area for the rest of the bones belonging to that moose. Then, they assess which bones they’ve found out of the nearly 100 bones each moose has puzzling out the puzzle that is always missing pieces dragged off by wolves or foxes or lost in the depths of an icy swamp. Teams carefully search to retrieve the incisor teeth, which usually fall out of the jawbone. Scientists can slice the incisors to reveal growth rings (much like the ones trees have). This is the most accurate way to assess the age of a dead moose.

For live moose, you have to ask them directly.

The skull, jawbone, all recovered teeth and the metatarsal bone from the back leg are nestled into already heavy backpacks for delivery to the scientists. The metatarsal bone is distinctive. One end of it looks machined, perfectly grooved and ridged to fit the bones just above the hoof. The metatarsal grows to its full length in the moose’s first year of life, so it is the best way to gauge the overall health and size of the moose.

In the 61 years of this study, over 5,000 moose skulls have been recovered on Isle Royale. Sometimes, bull moose die with their antlers still on their heads. Finding an antlered skull is a special prize for hikers, and transporting it back is an extra-heavy challenge. Even more prized (and equally dreaded) is finding the skulls of two bull moose who died trying to prove which of them would win the right to mate that fall. On rare occasions, the antlers of the bulls can become locked and neither one of them gets to breed that year. This “prize” of two skulls with locked antlers can easily weigh over 100 pounds.

Today, the largest collection of antlered moose skulls in the world is on Isle Royale. It is kept at Bangsund Cabin, which serves as a base for scientists. Visitors are welcome. 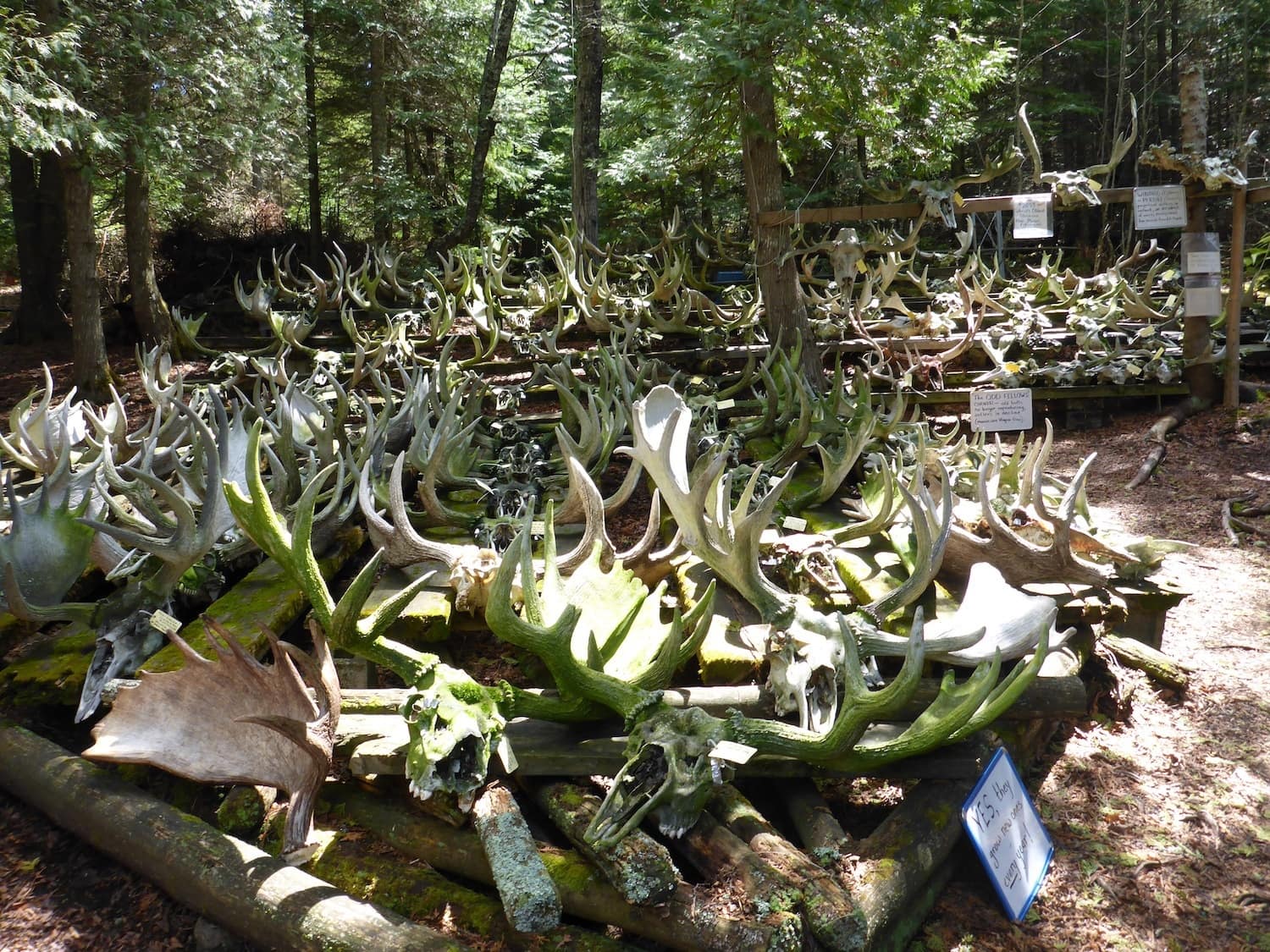 Island ecosystems are unique because of their isolation. Every creature and plant had to initially arrive there on the wind or waves or over the ice. Once there, they evolve in isolation. On Isle Royale, there are hundreds of types of lichen in colors from vibrant lavender to orange to greens and yellows. The plant species number over 700 and include 28 ferns and 32 orchids. At least one flower is found nowhere else on the planet. Packera insulae-regalis is a bright yellow daisy found only in the wetlands around Mt. Franklin near Isle Royale’s eastern tip.

There are a limited number of creatures on the island, including a mere 15 mammals and only three types of snakes (garter, red-bellied and gray ratsnake). These species often take on characteristics unique to the island. Garter snakes, for instance, tend to display brighter colors than those on the mainland.

Moose first arrived on the island over a century ago after swimming from the mainland. Moose are able to swim over 5 mph, and the 15-mile swim to Isle Royale is well within their range. After enjoying decades without any predators, wolves eventually trotted over a winter ice bridge to join them.

The lives and deaths of these two species are isolated and intertwined on the island. This is a bonus for scientists trying to unravel the complexities of interaction between predator and prey.

A few years ago, the population of Isle Royale wolves bottomed out at a single pair, male and female. These two remnants of a once healthy population (there were over 50 wolves on the island in 1980) are in no shape to take down moose. Even a full pack of wolves won’t go after a healthy moose, but only the weak, the sick and the very young. Examination of wolf skeletons recovered on the island provides evidence of how dangerous it is to try to take down the big herbivore. Most wolves had fractures long healed, jaws and ribs cracked by a well-placed kick from a cornered moose, or teeth broken in the struggle to take them down.

The demise of wolves on Isle Royale was precipitated not by nature, but by man. In the early 1980s, someone came to the island on their boat, and they brought their dog. This dog was infected with parvovirus when the virus had mutated to a strain highly lethal to canines. Two years after parvovirus was introduced on the island, only 14 wolves remained. Since then, inbred and isolated, the wolves have struggled to survive.

Recent estimates of Isle Royale moose put their numbers at 1,600. Without predation by wolves, the population could double in the next few years. This remote island would be overrun. A severe winter would see moose starve in mass numbers since the island is unable to provide enough winter forage to sustain that many moose.

The National Park Service (NPS) finally made the decision to bring more wolves to the island after a long period of study and public input. Last fall, four wolves were gathered from Ontario and released on Isle Royale. Over the winter, two more were transported. And in March, a U.S.–Canadian team successfully relocated seven gray wolves to the island—six wolves from an island in Canadian territory and one from the Ontario mainland. The half-dozen from Michipicoten Island in Lake Superior were in danger of starvation. 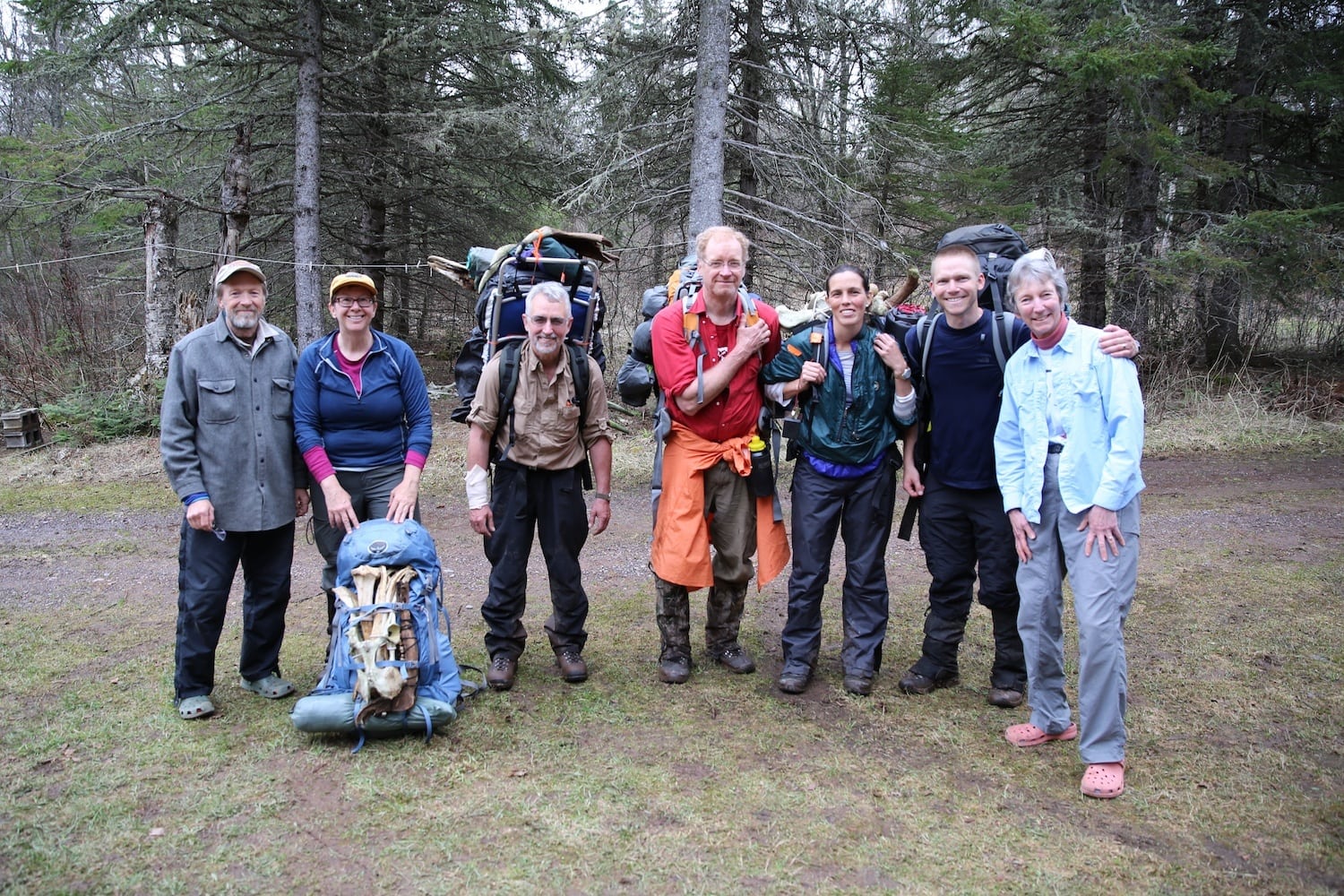 At 70 years old, Dr. Rolf Peterson is considered a world authority on wolves and moose. He is of less than average height, lithe and lean. He hasn’t yet gone completely gray, even in his full beard. His smile is easy as he locks his blue eyes on each volunteer.

I was thrilled the first time I met him. He extended his hand. I took it and said, “So nice to meet you, Dr. Peterson.”

He shook his head. “Rolf. Just call me Rolf.”

His wife, Candy, has been deeply involved with the study alongside Rolf. She has been a field assistant, a coordinator for volunteer teams and a writer. She interacts with park visitors, telling them about this unique wildlife study. She’s an eternal optimist. Her blue eyes shine as she talks about how the good in the world will always outpace the bad. She’s about Rolf’s height, lean and also not-yet completely gray.

Together, they raised their two sons mostly on this island. They have a home in Houghton for the winter, but once Isle Royale is accessible in the spring they pack up and move there. The Bangsund Cabin is a short walk from the Rock Harbor Lighthouse. The cabin was built in 1926 by island fishermen and is the Peterson’s home for the mild months when teams of volunteers hike the island under their direction.

Rolf had been encouraging the NPS to bring more wolves to the island for over a decade. The transport of four to the island last fall was the first installment to replenish the wolf population. Additional wolves will be added this fall, too. What a wonderful time to be a field scientist, at the moment when new wolves arrive on this remote island overburdened with moose. They watched as the wolves explored, formed packs, established territories and chose their winter dens.

I chatted with Rolf about what they’ve learned from over 60 years observing moose and wolves here. He pointed out that only by studying this system for many decades have they been able to see how dynamic the system truly is. If they had studied it for a shorter period, their conclusions would have been wrong.

“The most important lesson is that it is very dynamic, changing all the time,” he said. “So the notion of ‘balance’ is really a bit of fiction. And it’s complicated. Even a single predator/single prey system is complicated.”

He also pointed out how unexpected, chance events like the mutant parvovirus have disrupted the dynamics of the system. “Maybe more than anything else. And it’s unpredictable events that are in some cases unimaginable.” He continued, “So, ecology, instead of describing some kind of dynamic equilibrium that we can eventually seek to understand, it’s more of a narrative. The most powerful presentation of this story is when you just walk through the whole thing and pick out the big events and explain what happened because of parvovirus. That’s very powerful and compelling and it’s not what anybody thought we’d end up with 50 years ago. It was anticipated there’d be some nice package of moose/ wolf dynamics. And once we understand it here we could take that package and go anywhere else in the world and see the same thing. No.”

To read more of the original article and read related reporting, follow this link to the menorah.com website.  https://www.mynorth.com/2019/06/isle-royale-moose-wolves/