The Great Lakes are overflowing with record amounts of water Lake Erie and Lake Superior broke records for average water levels in May, as did Lake St. Clair on Detroit’s eastern edge, according to the U.S. Army Corps of Engineers. In May, Lake Erie also reached its highest level on record for any month.

Record- or near-record-high water levels are forecast to continue in the summer before making the usual downturn into fall.

The effects of these high waters have been wide-reaching. Recreational beaches have shrunk, and water has inundated docks and destroyed roads.

Damage to lakeshore property was reported again this week along Lake Ontario in Upstate New York in the town of Henderson.

This kind of flooding has occurred along the shores of the Great Lakes for months, in some places repeatedly, and intensifies during high-wind events and storms. Normal water levels in the Great Lakes are largely modulated by precipitation, natural springs and rivers. Great Lakes water levels typically rise during the spring into summer, but this year it has been extreme.

Year-to-date precipitation in much of the Great Lakes region is running 150- to 200-plus percent of normal. Only the Lake Ontario region has seen somewhat lesser amounts, though it has still endured flooding. Winter saw record snowfall. Last year was also fairly wet.

Although rainfall surpluses have continued to be significant in recent months, the past few weeks have seen a drier pattern take hold. But this drier spell may not last, and only persistent dryness would meaningfully reduce the risk of future flooding. 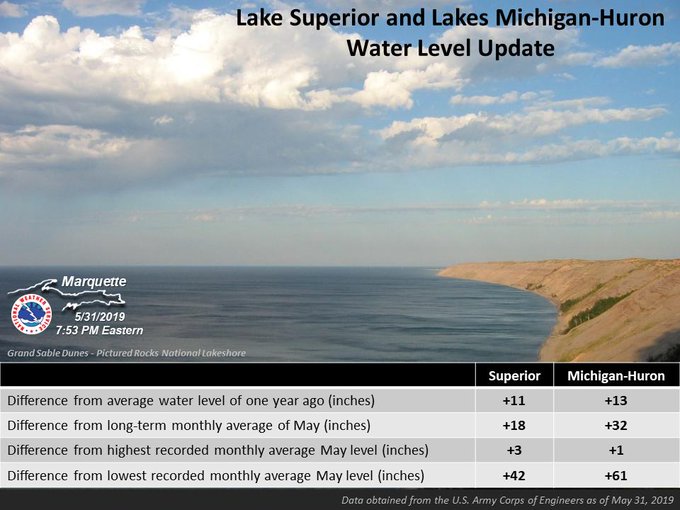 The outlook from the U.S. Army Corps of Engineers indicates monthly mean water levels for June are likely to meet or surpass record highs for that month.

Water levels are forecast to continue rising through June on Lake Superior and through the heart of summer. For Superior, levels are anticipated to stay near or above previous monthly records every month through September. Lakes Michigan and Huron also are likely to see additional rises of several inches through June. Elsewhere, lake levels are anticipated to fall but remain near or above record levels for that time of year. 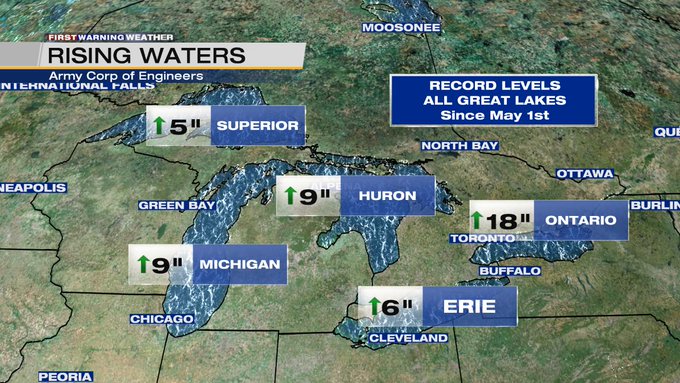