Summer 2019 Temperatures could be cooler than average in the Central U.S. Summer temperatures will be hotter than average on both U.S. coasts and cooler in the central part of the country, according to an outlook released Thursday by The Weather Company, an IBM Business. 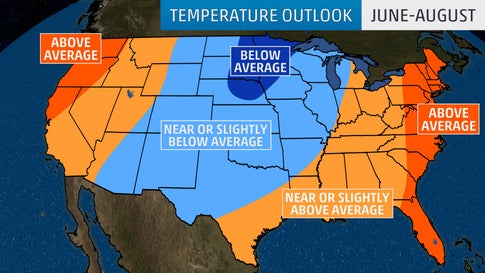 El Niño, a factor used to determine the summer outlook, has a 65 percent chance of continuing through the summer months.

In the the northern Plains and upper Midwest, soil moisture is much above average, and that can have a cooling effect on temperatures near the Earth's surface.

Long-term computer model forecast guidance indicates the East will be warmer than average.

Keep in mind that these outlooks are overall trends over a three-month period from June through August. An individual cold front or an upper ridge of high pressure can lead to a period of colder or warmer weather, respectively, that bucks the overall three-month trend.

Here's a breakdown of how the forecast evolves each month from June through August.

The Pacific Northwest, Southeast and mid-Atlantic are favored to see above-average warmth as summer kicks off in June.  Cooler-than-average temperatures are most likely in the northern Plains and upper Midwest. 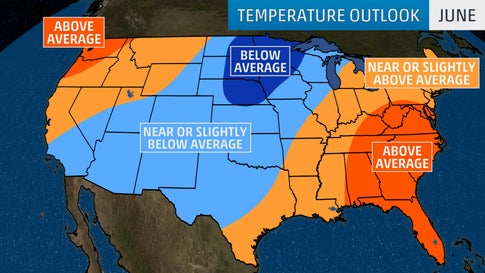 The area favored to see below-average temperatures grows in July across the northern and central Plains and upper Midwest.

In addition, the hotter-than-average conditions in the East are expected to shift toward the Northeast. The Pacific Northwest warmth is expected to expand farther southward to include parts of Nevada and California. 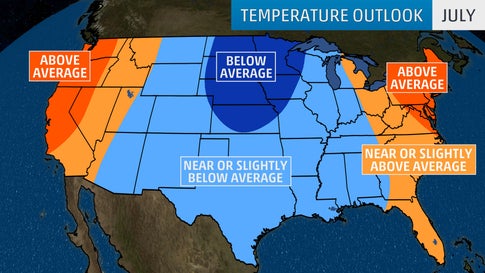 Summer's final month could bring heat and humidity to much of the East Coast. A continuation of warmer-than-average temperatures is forecast from the Northwest into Northern California.

Meanwhile, the relatively cool summer trend may continue in the Plains and Midwest. 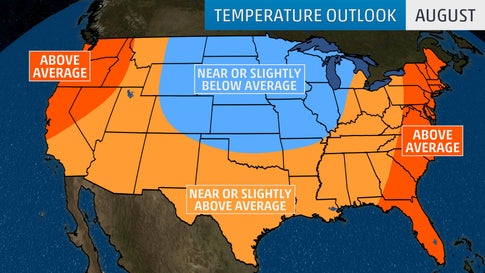