Blue walleye mucous could be a sun block for fish, says American researcher A study into an unusual form of the common walleye, that is blue in colour, has revealed some traits that could make it important to medical research.

Wayne Schaefer, a researcher from the University of Wisconsin, said the blue walleye may have its own form of natural sunscreen.

He said the mucous that creates the blue colour - called Sandercyanin - is a form of protection for the fish.

"From an ecological point of view it appears the Sandercyanin protects walleye in northern areas of the earth from ultra violet radiation," he said. "Which is more abundant coming in from our North Pole than in the mid-latitudes of North America. It's a protective function. It's one of the little miracles of nature."

Schaefer said the blue coloration is caused by a protein secreted into the mucous. The blue pigment was found in yellow walleye as well as blue walleye from the same lakes.

A fish biologist by trade, Wayne Schaefer first came into contact with blue walleye while fishing near Armstrong, in Northwestern Ontario, back in 1993.

"I'm a sport fisherman," he said, "and I began catching walleye that were blue in colour, rather than yellow, and that peaked my interest." 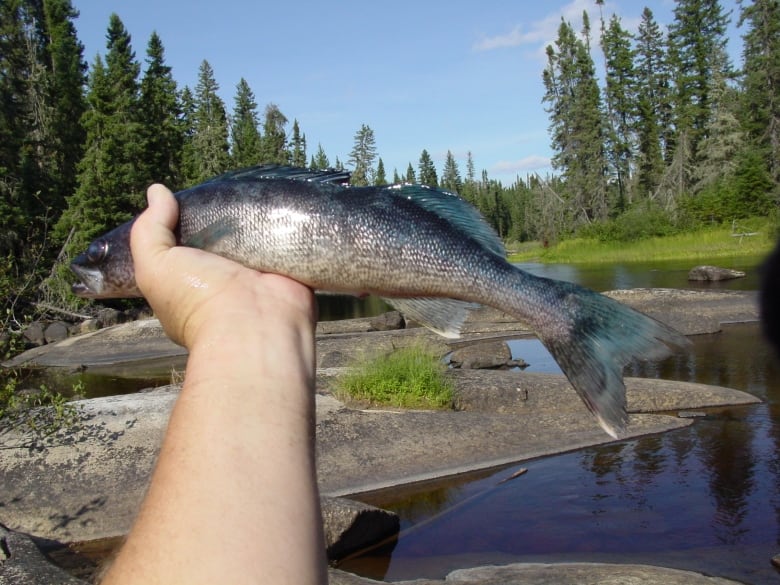 The Sandercyanin that makes some walleye blue is produced seasonally, with more in summer than winter.(photo: W Schaefer)

Schaefer had studied the "blue pike" of Lake Erie as a graduate student.Those fish were a sub species of the common walleye, but were blue in colour instead of the standard yellow.

The blue pike were an important commercial species in the early 1900s in Lake Erie, but were extinct by the mid-1950s. However, the blue tones Schaefer noted in the walleye from northern Ontario made him wonder if it was the same species as the now extinct Lake Erie fish. He packaged a few of the fish he caught up and brought them back to the states. So began his research into northern Ontario's blue walleye.

"The first question that we wanted to answer was, is this the same species as was in Lake Erie?" said Schaefer. "So we contacted an expert in walleye genetics. Genetics is the true test. Not colour, not behaviour, but rather DNA sequencing."

The fish Schaefer had caught were genetically compared to archived samples of blue pike stored at the University of Michigan.

"They were two different things," says Schaefer." The blue walleye of northern Canada are just a colour variation of a regular walleye."

However, there were other things about the blue walleye that would soon be revealed.

"The colour - to my surprise - was found in the mucous of the fish." he said. "Not in the scales of the fish." Schaefer said the first specimens he handled looked grey in colour, rather than bright blue. Yet the were different enough that he put them in zip lock bags and brought them back with him.

"By the time they got back to my lab in Wisconsin, in the zip lock bag, there was bright blue colour in the fluid in the bag," he said. "Along with the fish.I don't know any other report of any other colour in the mucous of fish species."

Schaefer said the presence of blue walleye in watersheds is largely geographic.

He said the blue walleye he has examined and heard about are largely north of the Canadian border.

Schaefer said south of the Canada / US border there is very little blue colouration in walleye.

Schaefer said they initially thought the mucous might be caused by a symbiotic micro-organism in the mucous of the fish like a bacterium or an algae. That was not the case. 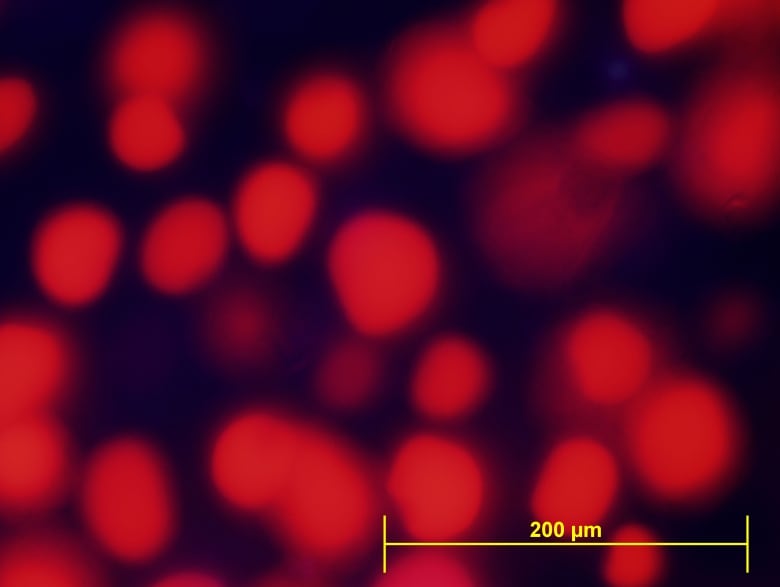 Schaefer said the research also explored the potential scientific importance of Sandercyanin as a fluorescent protein in medical research.

"Early in this research, I thought that Sandercyanin might fluoresce in ultraviolet radiation" he said.

"In 2008, at the University of Iowa in their microscope lab, they radiated a fresh sample of walleye mucous with ultra-violet light. Glowing back at us bright as could be, were red cells of Sandercyanin. It was one of the most amazing experiences of my professional career."

Schaefer said at about that same time, researchers at the University of California had published work on green fluorescent protein found in jelly fish. That research went on to be so useful, the researchers received a Nobel Prize. Schaefer said the medical aspect of the protein is it can be cloned, and its genetic sequence determined.

The genes for the fluorescent proteins are then packaged and made available to medical researchers. They act as a marker or a tracker.

Schaefer said Sandercyanin has great potential for medical research, but it needs more work. "We just have to tweak it," he said.

Schaefer noted Sandercyanin does not harm the health or taste of the fish and is produced seasonally, with more in summer than winter.

To read the original article and read related stories, follow this link to the CBC  News website.  https://www.cbc.ca/news/canada/thunder-bay/blue-walleye-mucous-could-be-a-sun-block-for-fish-says-am...