This past weekend's capture and release of six wolves facing starvation on Canada's Michipicoten Island - and another wolf nabbed from that country's mainland - gave the wolf relocation project its biggest influx of four-legged moose hunters since the project began last September.

The last-minute effort was heralded as a "huge success," funded by two nonprofit foundations that wanted to move the last remnants of a wolf pack off Michipicoten, where all the caribou were gone and those wolves were left with just rabbits and beavers to eat. Pilots said after the six wolves were taken, no more wolves were seen on the Canadian island.

The big animals - including one male weighing 99 pounds - were net-trapped, vet-checked and fitted with GPS tracking collars before being flown to Isle Royale, where a growing moose population has been deemed a problem for years.

"To say there was no time wasted in  accomplishing the mission would be an understatement," the National Parks of Lake Superior Foundation said in a statement. "For once, the  weather cooperated. The capture team and the Ontario Ministry of Natural Resources & Forestry  transport team were  able to fit four days of effort and resources into two days and we couldn't be happier with the outcome!"

The groups launched a GoFundMe effort to cover the costs.

Officials from the teams in the U.S. and Canada have shared these photos from the weekend's relocation work. 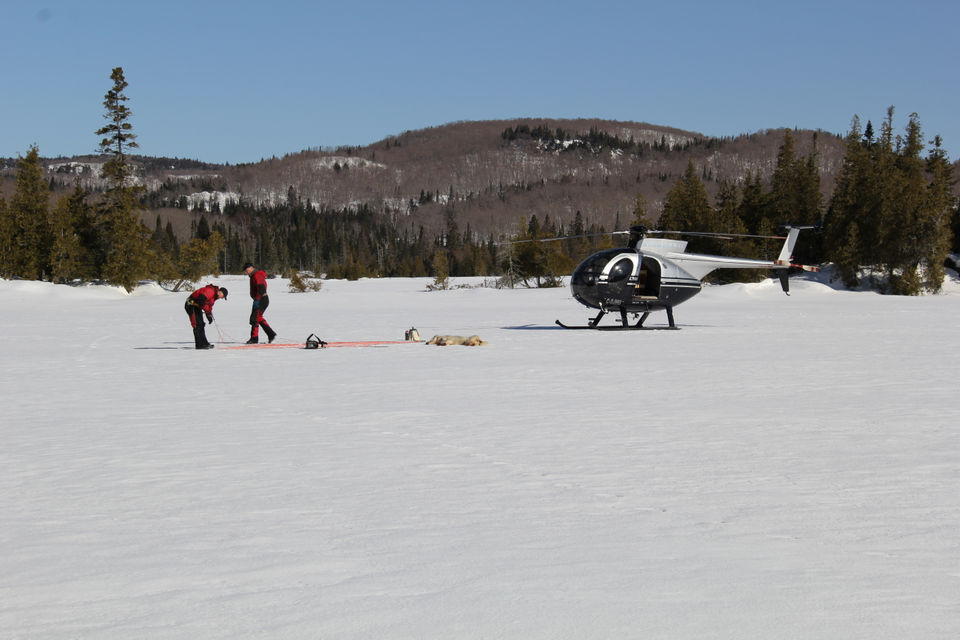 After capture of one of the female wolves. 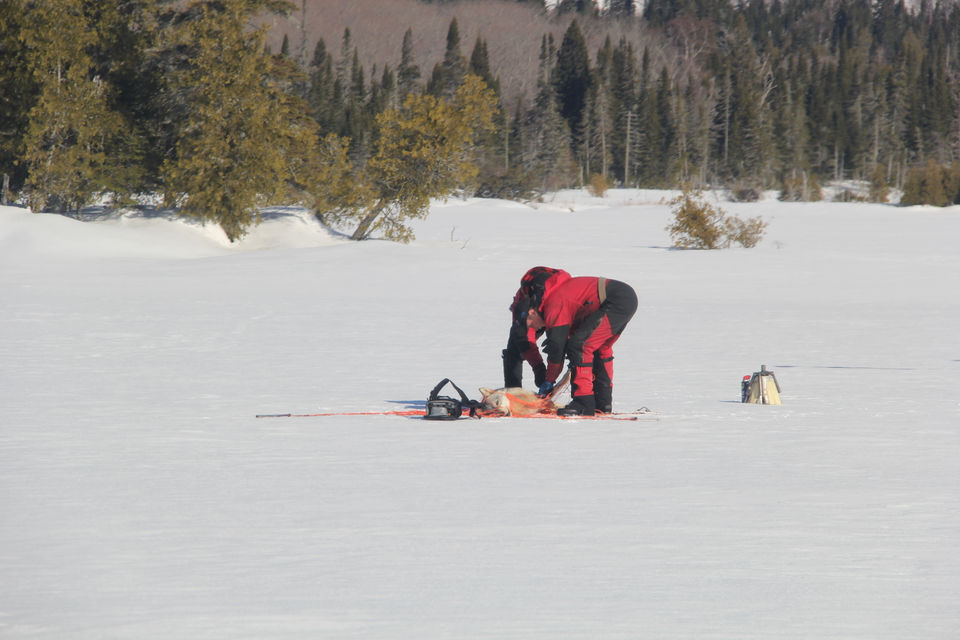 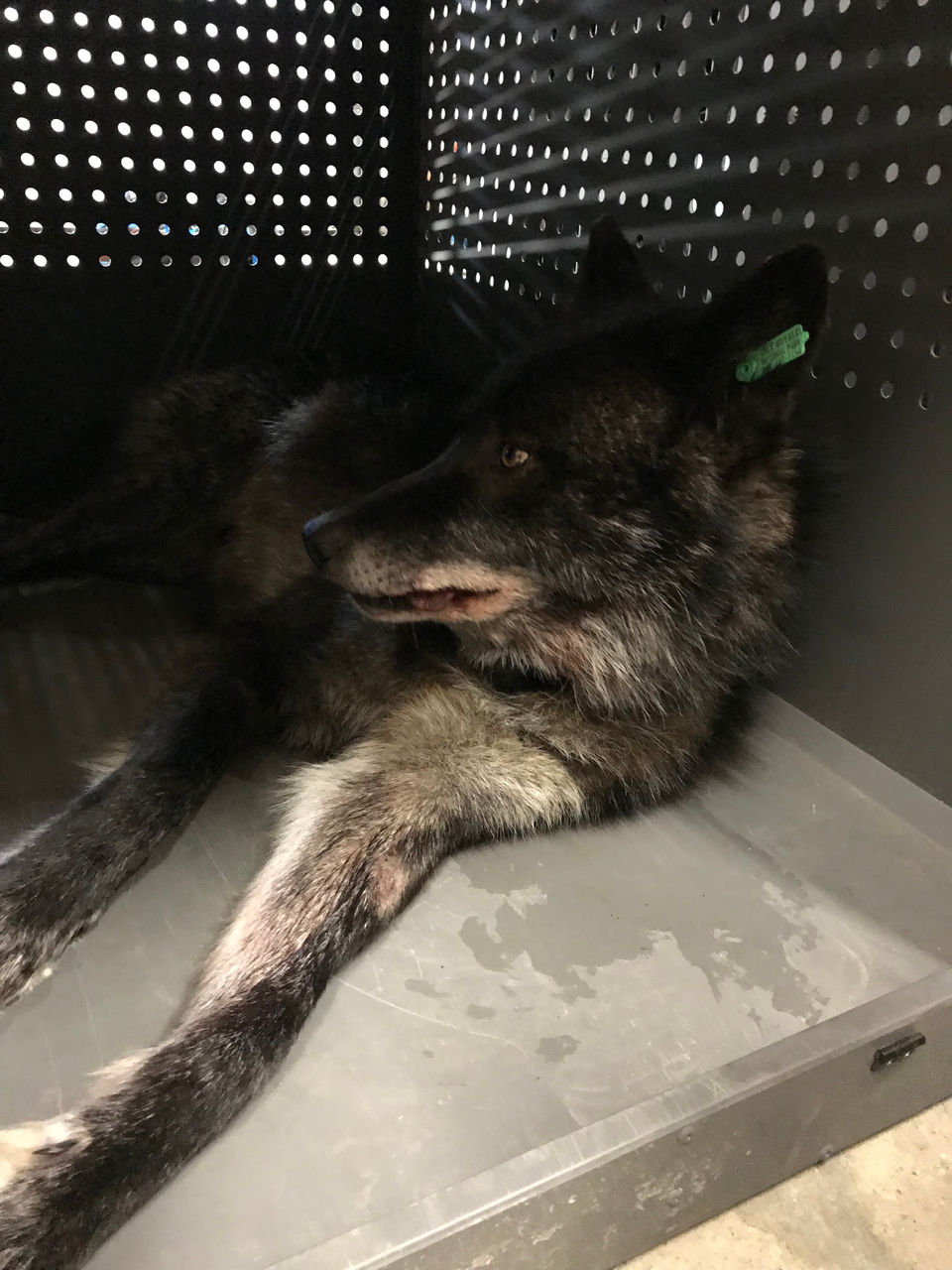 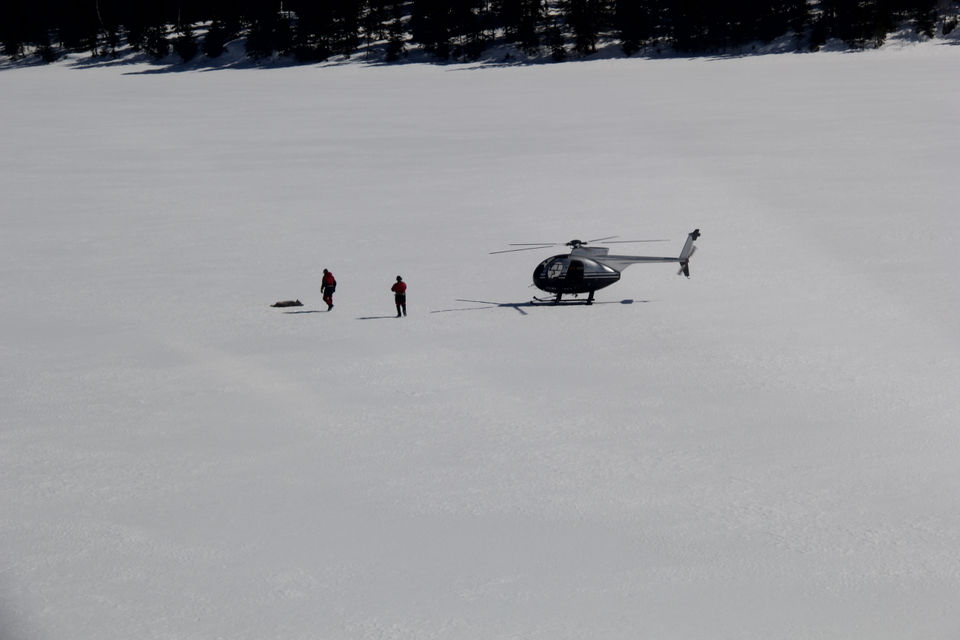 FROM A BIG PACK TO AN OLDER PAIR

Isle Royale once had a healthy wolf pack, begun from predators that decades ago are thought to have crossed an ice bridge from the mainland.

In recent years, due to disease, accidents and other factors, the large pack shrank to just two wolves - a related pair whose family tree was so twisted researchers believed they were unlikely to have viable offspring. Meanwhile, the island's moose population has surged past 1,500. 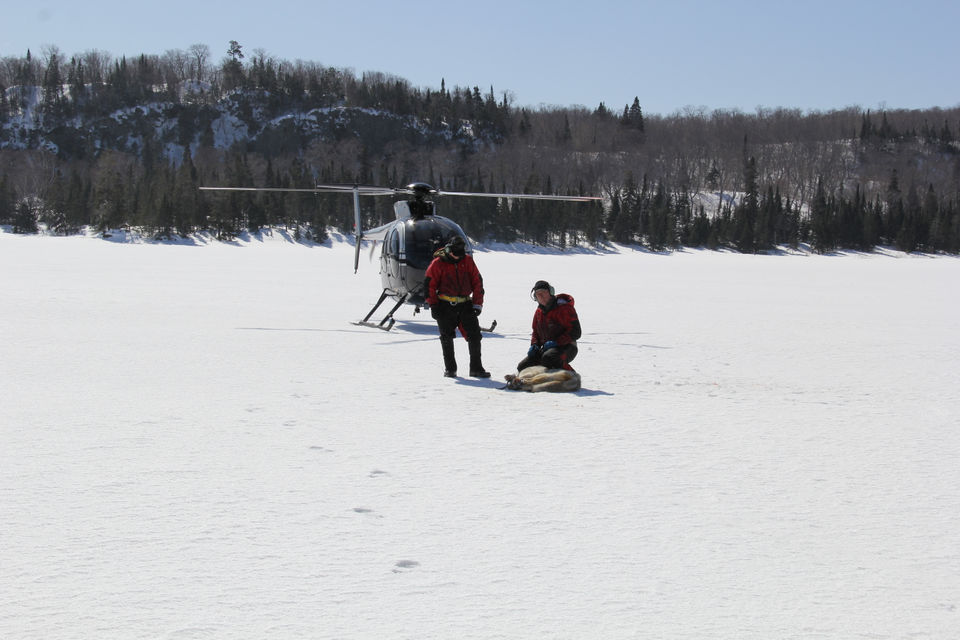 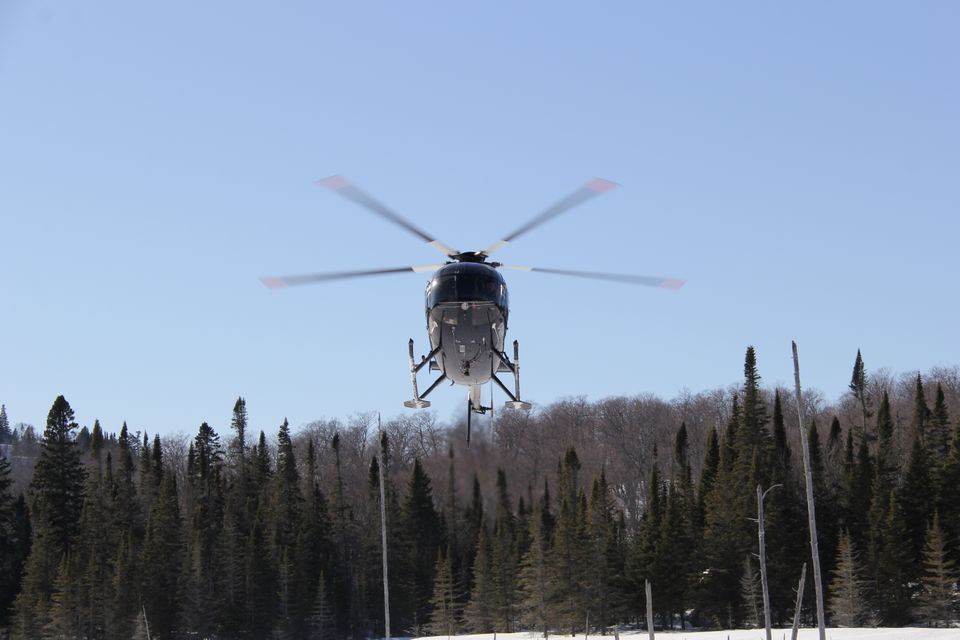 A helicopter used in the wolf captures.  Photo courtesy of Ashley McLaren, OMNRF 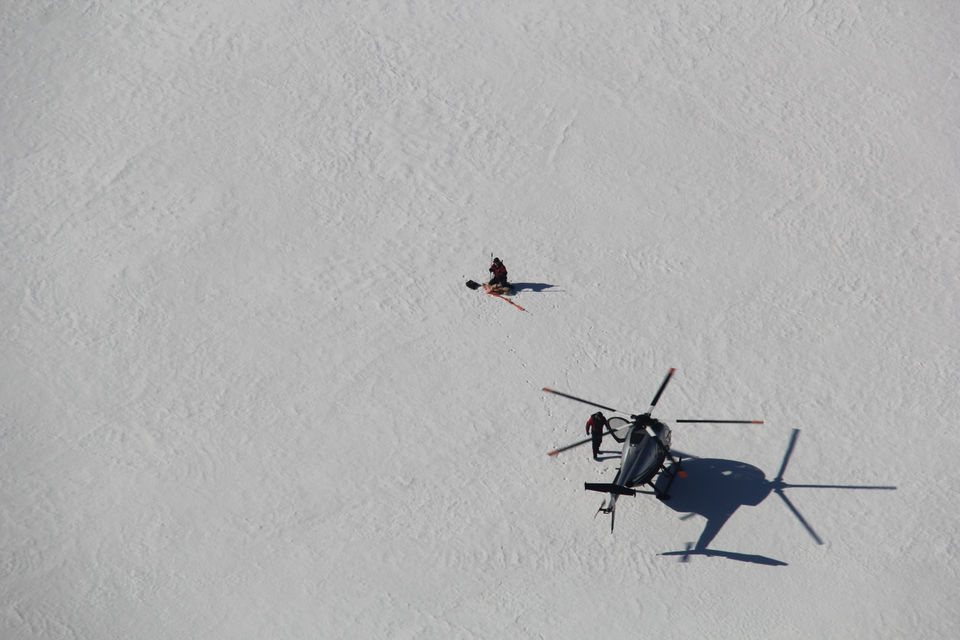 Capture of a wolf on Michipicoten Island.  Photo courtesy of Ashley McLaren, OMNRF 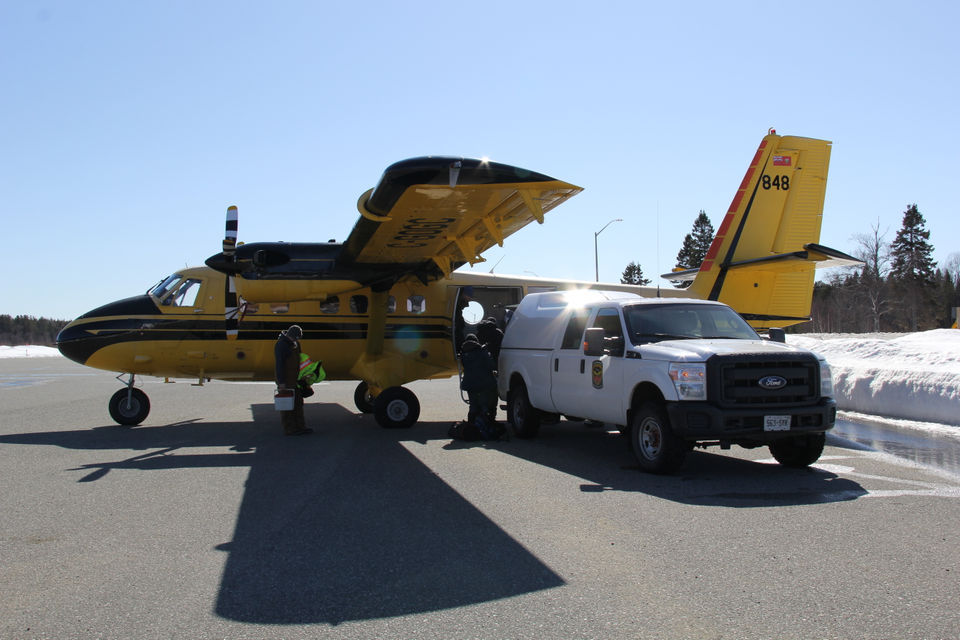 When the National Park Service kicked off its relocation effort in September, the first new wolves were trapped on tribal lands in Minnesota.

Earlier this year, larger wolves were caught in Ontario and on Michipicoten Island, including that island's alpha male.

Last weekend's capture netted the last of that island's wolves, bringing them all to Isle Royale, including that pack's alpha female and a younger female wolf that researchers say might be pregnant. If that's true, the first wolf pups in years could be born on Isle Royale this spring. 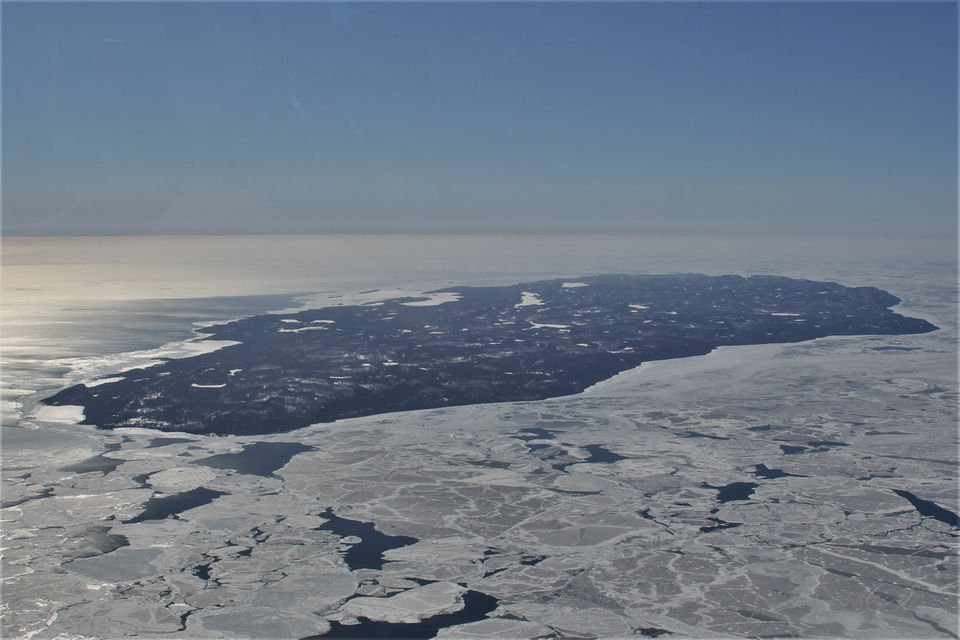 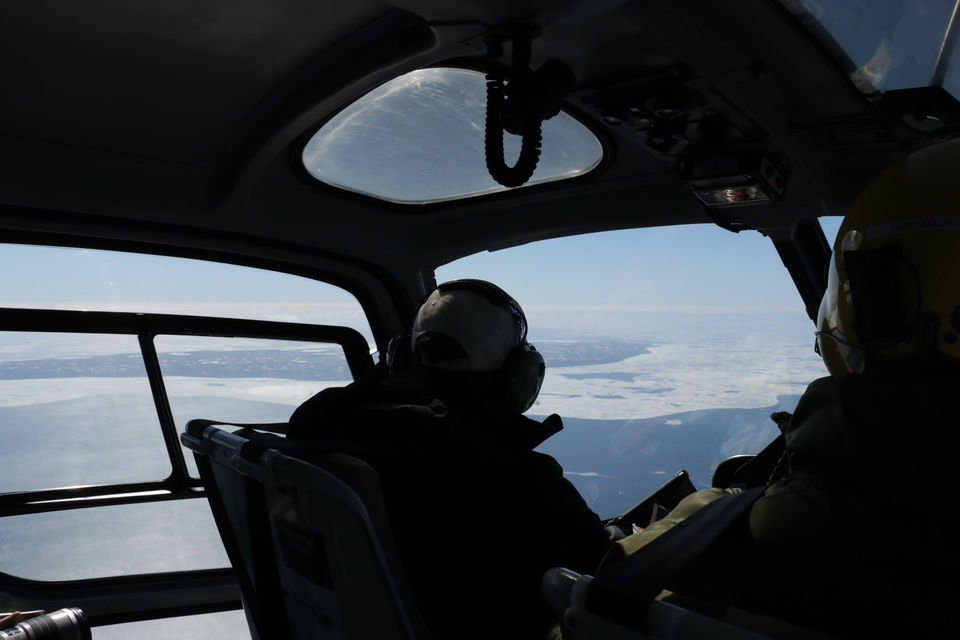 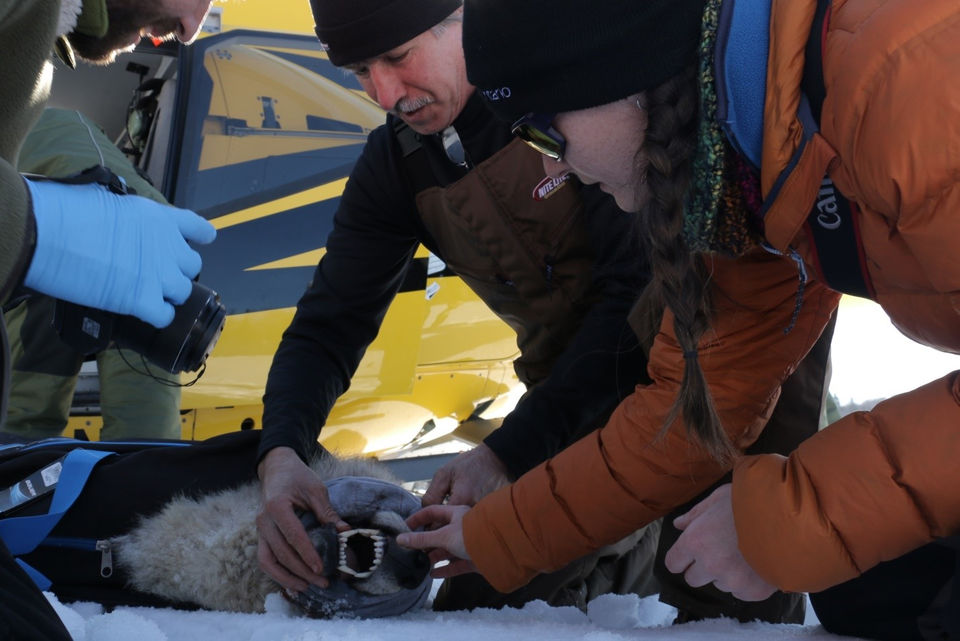 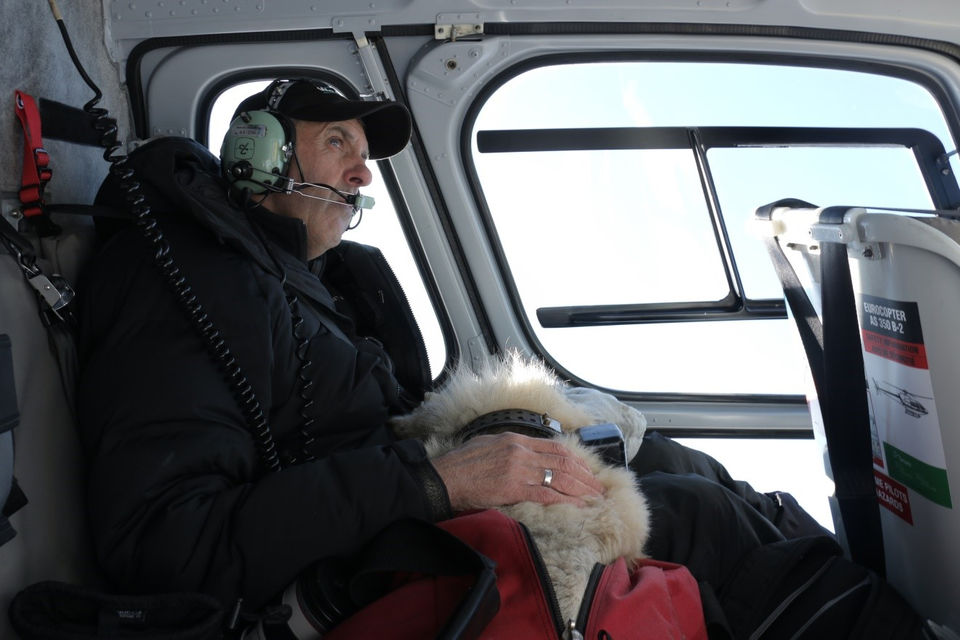 Not all the wolf transfers have gone smoothly during this project.

One Minnesota wolf was caught and died in a holding facility before she could be transferred to the island.

A Minnesota male transferred to Isle Royale was found dead on the island weeks after his release. His GPS tracking collar had been showing no movement, and researchers sent to find him on the island discovered his body. No cause of death has been released.

Another female wolf trapped in Minnesota stayed on Isle Royale until the end of January, when she used an ice bridge in Lake Superior, created by this winter's Polar Vortex, to make it back to the mainland. 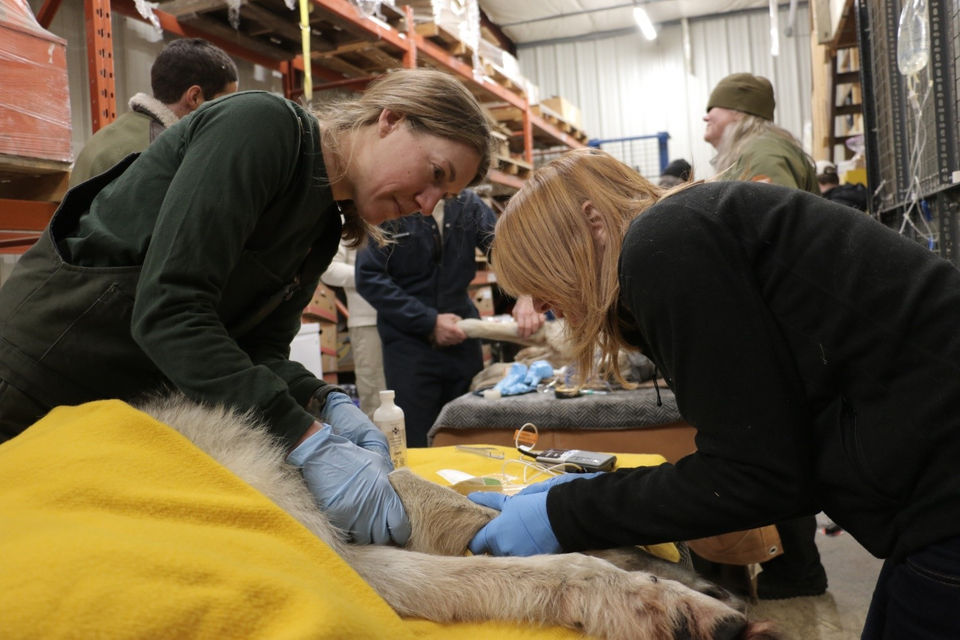 Examining one of the wolves.  Photo courtesy of J. Graham - National Parks of Lake Superior Foundation 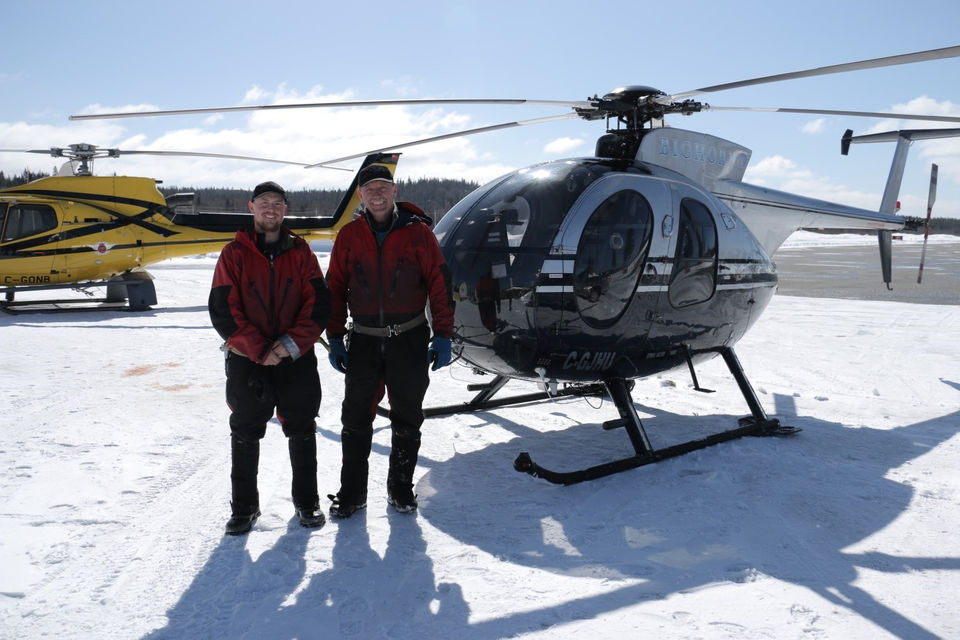 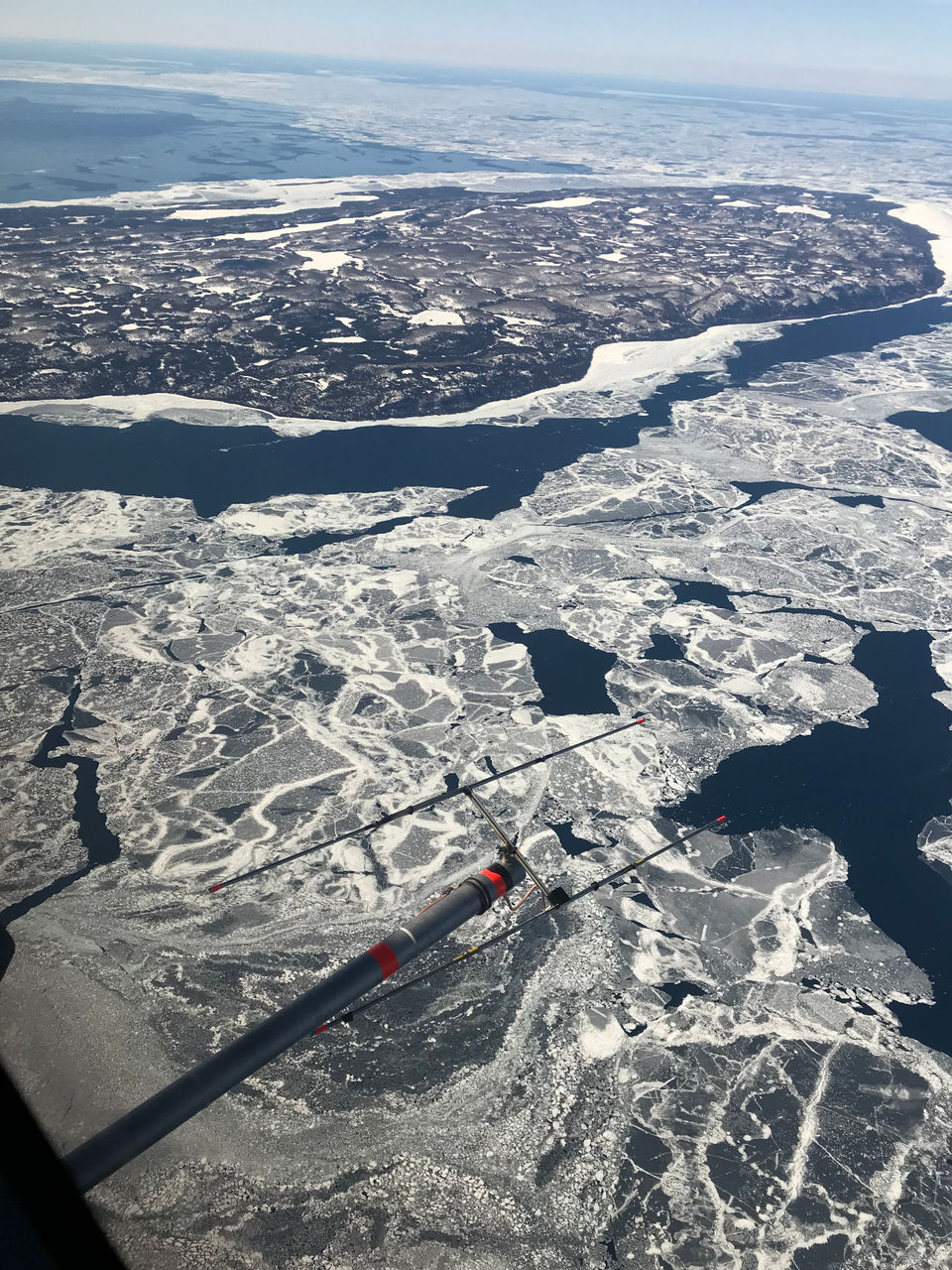 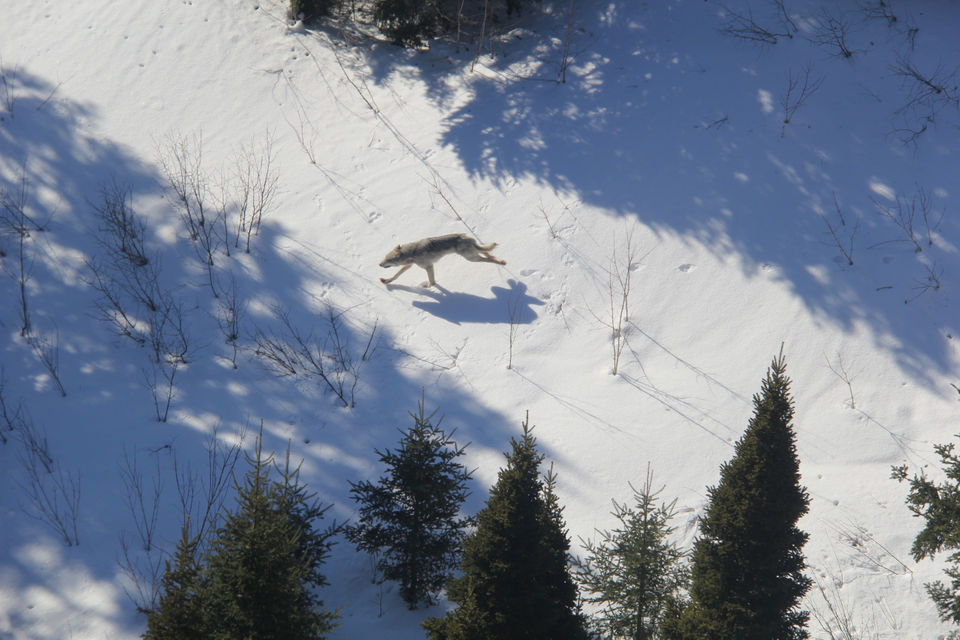 Wolf running toward the trees before capture.  Photo courtesy of Ashley McLaren, OMNRF

WHAT WE KNOW ABOUT THE NEW ARRIVALS

We know a few things about Isle Royale's newest wolves from Canada. The National Parks of Lake Superior Foundation posted these tidbits on social media during the weekend relocation project:

"The team mobilized early and by the end of Friday,  4 Michipicoten  wolves were caught on the Island and transported for vet checks in the  Wawa area.  Three males and one female were captured, with one male  weighing on at 99 pounds. The wolves  ranged from poor to good condition, and all were deemed suitable for  transport to Isle Royale National Park, but are being held overnight due  to darkness and air transport availability. "

"The alpha female was sighted and  appears to be in good health running with two other wolves.  The capture  crews are returning to the island Saturday morning to target her  capture while the 4 wolves captured on Friday will make the journey  across Lake Superior Saturday to arrive on Isle Royale National Park in  the late afternoon."

"The Michipicoten Island capture and relocation project, involving the  Canadian OMNRF, US NPS, and Bighorn Helicopters capture team, has  successfully captured 2 more wolves on the island. They are the known  alpha female and a younger female that may be pregnant. The capture crew  didn't see any other wolves on the island as of earlier this afternoon."

"SUCCESS!!! The wolf capture and relocation project that NPLSF &  International Wolf Center are funding has been a  huge success! Six  wolves that remained on Michipicoten Island, Ontario, and one wolf from  mainland Ontario, were captured, vet checked, and transported to Isle  Royale National Park for release over the last couple of days. The  Ontario Ministry of Natural Resources & Forestry approved the  privately funded (by NPLSF & IWC) operation on Monday, March 18th.  By Friday morning it was "game on" with  the OMNRF, US National Park Service, and the Bighorn Helicopters'  capture team working together to make it happen." 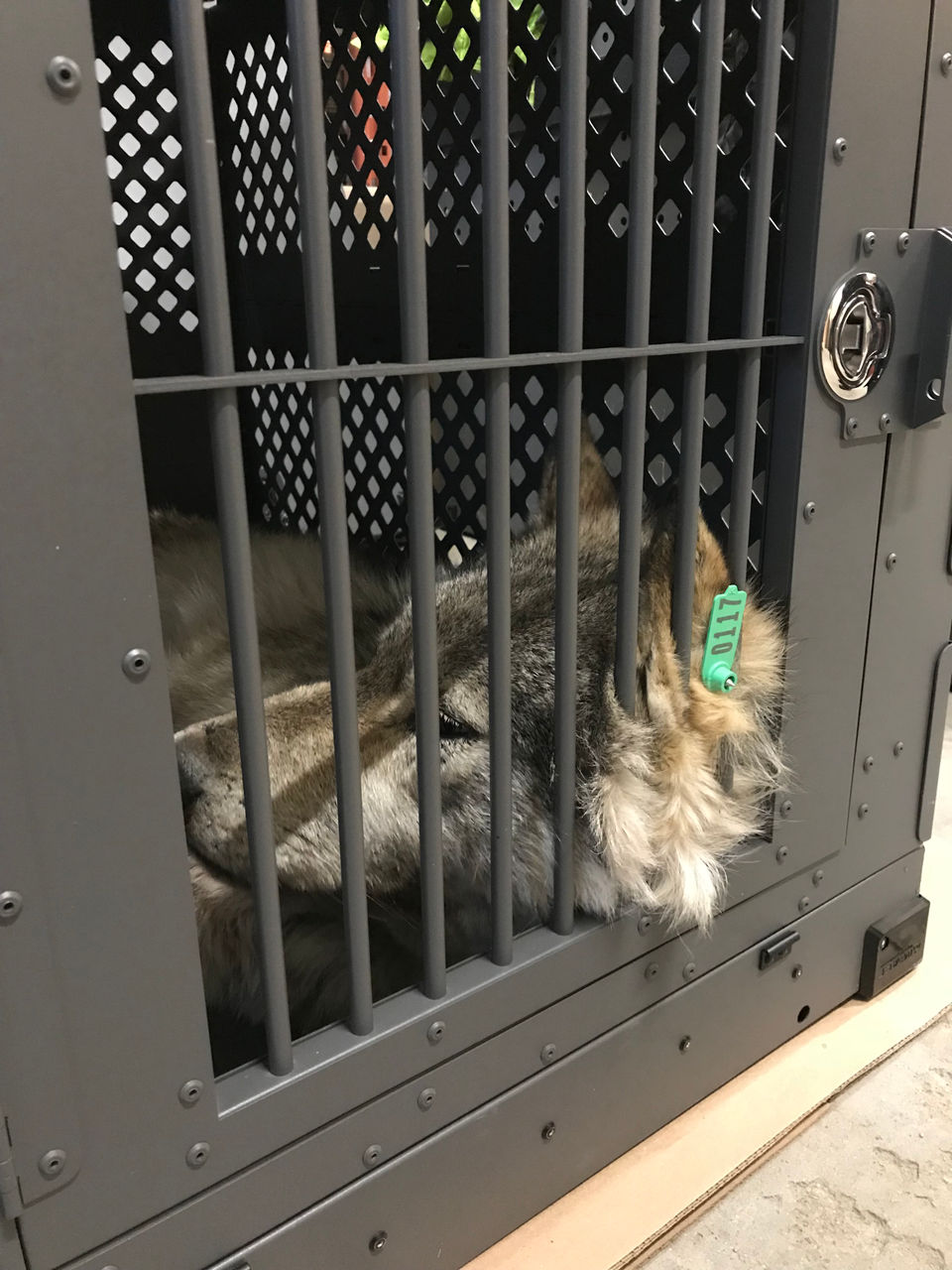 Wolf waking up from sedation in crate.  Photo courtesy of Ashley McLaren, OMNRF 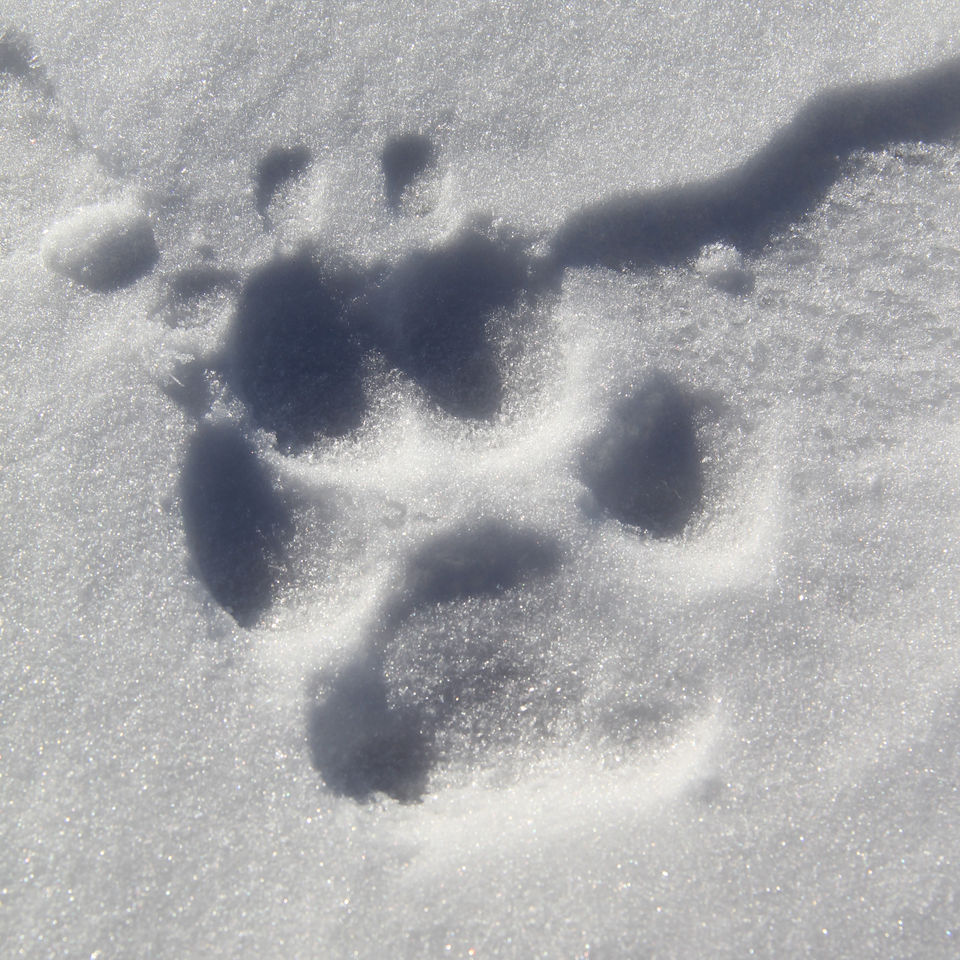