Winter Storm Ulmer has slammed into the Rockies and Plains with heavy snow, blasting winds and limited visibility, leading to the death of a Colorado State Patrol officer and stranding more than 1,000 people in blizzard conditions on highways.

“We are getting to them one-by-one,” he said. “There are a lot of people out there, I don’t believe our advice — to stay off the roads — was heeded very well.”

Colorado Gov. Jared Polis has declared a state of emergency, and the National Guard will be activated to assist with search, rescue and life safety operations, the state's Emergency Operations Center announced.

Emergency warming shelters were set up near many of the highways.

Earlier in the day, a Colorado State Patrol corporal was hit and killed while he was outside his vehicle helping with a car that had slid off Interstate 76 in Weld County, the patrol reported. About 11:20 a.m. a Volvo lost control and ran into Corporal Daniel Groves, 52. He was taken to a hospital where he was pronounced dead. The Volvo's driver had moderate injuries and was also taken to the hospital, the patrol said. Investigators are looking at whether the Volvo was going too fast for conditions.

Denver International Airport closed all runways about 1:30 p.m. MDT. More than 1,350 flightsin and out of Denver have been canceled, according to flightaware.com. Pena Boulevard, the main route leading to the airport, was closed at 40th Avenue because of the blizzard conditions.

A massive pileup has been reported on southbound lanes of Interstate 25 near the Palmer Divide south of Denver. A video posted to social media shows dozens of vehicles piled up in blizzard conditions.

KDVR reports more than a dozen vehicles are involved in the pileup in Douglas County. Parts of Interstate 25 was closed from Centennial to Monument, south of Denver. North of the city, about 22 miles of I-25 near the Wyoming border are also shut down because of the weather conditions.

"This is about as bad as I've ever been in ... as I've been in winter-wise in the 27 years at The Weather Channel," meteorologist Mike Seidel said during a live report from near the Denver airport. "I'm trying to run back every snow storm I've ever been in with a lot of wind. And I can think of maybe the Duluth Blizzard that was on Feb 29, 2012, and ... this is right up there with that as far as the wind. That had heavier snowfall though...."

More than 500 miles of Interstate 80 is essentially closed from Rock Springs, Wyoming, to Kearney, Nebraska, the two states' transportation departments reported. The Wyoming agency noted the closures will last overnight Wednesday into Thursday. I-25 was also closed for more than 300 miles from Buffalo, Wyoming, to the Colorado border.

Also in Colorado, Interstate 70 was closed in both directions from Aurora to Goodland, Kansas, because of the bad conditions. A second stretch of I-70 west of Denver also was closed in both directions. Multiple stretches of Interstate 76 were closed from northeast of Denver to the Wyoming state line. Other highways and roads were closed throughout the state. 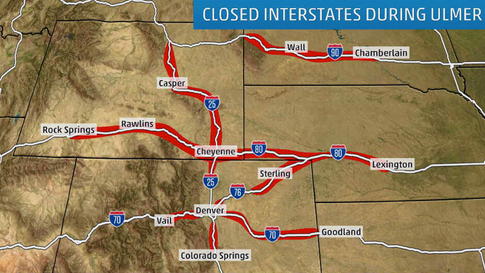 Interstate 90 in South Dakota was completely shut down from Wall to Chamberlain because of the conditions. The state Transportation Department said flooding was reported on roads in southeast and south central South Dakota as well.

Government offices and schools throughout the region, including Denver area schools, are closed Wednesday. The 17 districts in the Pikes Peak Region also closed for the day.

Xcel Energy reported more than 187,000 customers were without electricity as of 5 p.m. MDT. Power had been restored to about 64,000 customers, but a spokesman for the company tweeted that many would likely be without power all night. Another 4,000 or so homes and businesses had no power in surrounding states, poweroutage.us reports.

At least five hospitals in Denver were using backup generators for power because of the electrical outages, according to the Denver Post.

A semitrailer crash forced the closure of eastbound lanes of Interstate 70 east of Vail, the Colorado Department of Transportation reported. The highway later reopened.

On Tuesday, blizzard warnings and the threat of flooding prompted Nebraska Gov. Pete Ricketts to declare a state of emergency, which enables the Nebraska Emergency Management Agency to coordinate response and recovery activities with local governments and other state agencies, according to a press release.

“Nebraska has experienced a significant amount of severe weather and precipitation over the last couple of months,” said Ricketts. “Nebraskans should watch the forecast closely in the coming days, and be prepared for severe weather events in conjunction with potential historic flooding. As Nebraskans know, conditions can change quickly, and everyone needs to be prepared.”

Farther west, the Idaho State Police said the slick roads had caused multiple crashes and slide-offs on Tuesday. One car rolled over in a crash on U.S. 95 near Athol, Idaho.

In Washington, the state Department of Transportation said plows were working to clear Interstate 90, which was covered with snow by 5 a.m.

Washington State Patrol Trooper Jeff Sevigney tweeted that his SUV was hit by another vehicle while he was responding to a slide-off on State Route 27 near Freeman, KHQ-TV reported. 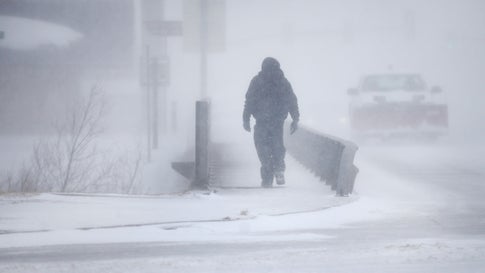