The sun sets at the Apostle Island ice caves on March 5, 2015 near Cornucopia, Wis. Derek Montgomery for MPR News 2015

Lake Superior is nearly 90 percent covered with ice, with a chance it could reach 100 percent ice coverage yet this winter — something that hasn't happened on the big lake since 1996, the only time it's occurred since record-keeping began 47 years ago.

But despite all that ice, the ice caves at Apostle Islands National Lakeshore in northern Wisconsin will likely not be accessible to the public this winter.

Park Service officials were able to venture out on the lake near Cornucopia, Wis., on Friday to test the ice, to see if it was safe for visitors to make the trek along the shore to view the caves.

"And what they found is that the ice sheet along the length of the caves is really fractured, it's really rough, what they call 'shark fin' ice," said Julie Van Stappen, chief of planning and resource management for the park. "Imagine a sheet of ice, and then the wind comes up and breaks it all up, and then it refreezes, and (it) sticks up."

In addition to that, she said, all the snow the region has received insulates the ice. So instead of hard, solid, what they call "black ice" — the park service's "ice team" encountered soft, porous and slushy ice. 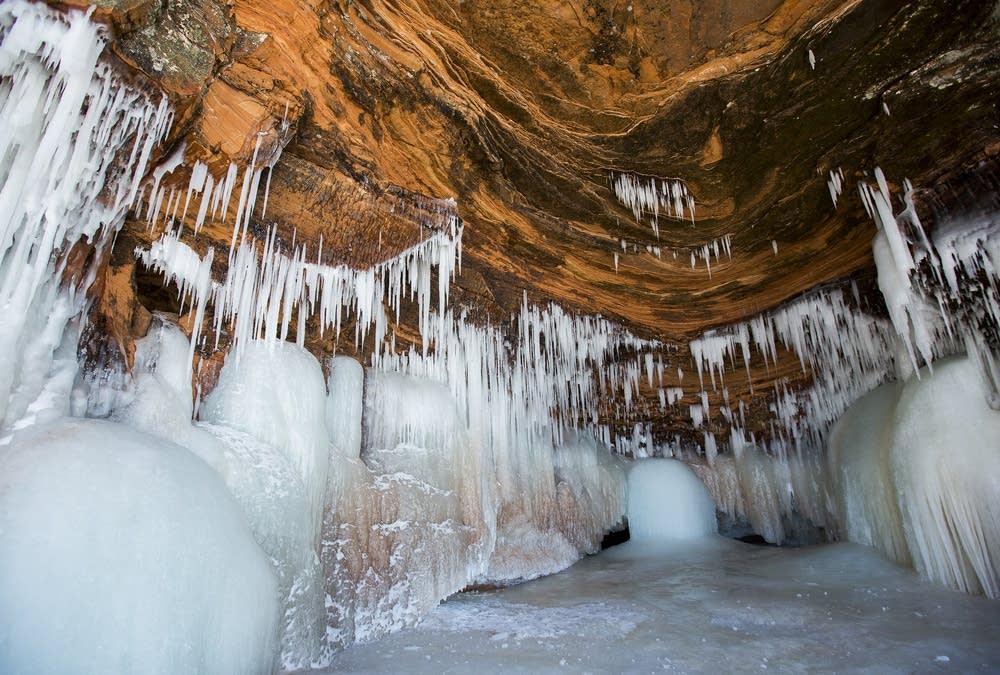 The ice caves at the Apostle Islands National Lakeshore, as seen on Feb. 4, 2014 near Cornucopia, Wis. Derek Montgomery for MPR News 2014

The last time the ice caves were accessible to the public was in 2014 and 2015. Images of glistening, sandstone caves, covered with sparkling ice formations, spread like wildfire on social media, drawing tens of thousands of people to the remote area to make a frozen trek along the shore of Lake Superior to the caves.

But since then, warm winters have prevented the formation of ice that's thick enough to support the throngs of visitors.

Wind is often the biggest culprit.

"Basically you have a bunch of pieces of ice that are kind of freezing together but they're not real solid, and that's the kind of ice that once the wind changes to a different direction, especially from the northeast, it tends to peel off, so it can change really quickly," said Van Stappen.

In 2014, that's the kind of ice that initially formed. But then high winds blew the ice away, and frigid, calm conditions that followed allowed thick, smooth ice to form. Van Stappen said officials hoped that would happen again this year. But now that it's March, she said chances of that happening are declining.

"Unfortunately it is not good ice and it's not accessible now," she said. "We'll keep an eye on it, but the likelihood is getting less" of the caves opening.