By Cecily Hilleary from Voice of America - February 15, 2019

These days, Native American Flute Players perform at music festivals across the globe. But few belong to any tribe or nation, something that troubles Darren Thompson, a member of the Lac du Flambeau Band of Lake Superior Chippewa in northern Wisconsin and an award-winning flutist.

This week, he is performing at the National Museum of the American Indian (NMAI) in New York, sharing stories and music that speak to the history, trauma and resilience of the Ojibwe people. And of course, to the instrument itself, which the Ojibwe call "bibigwan." 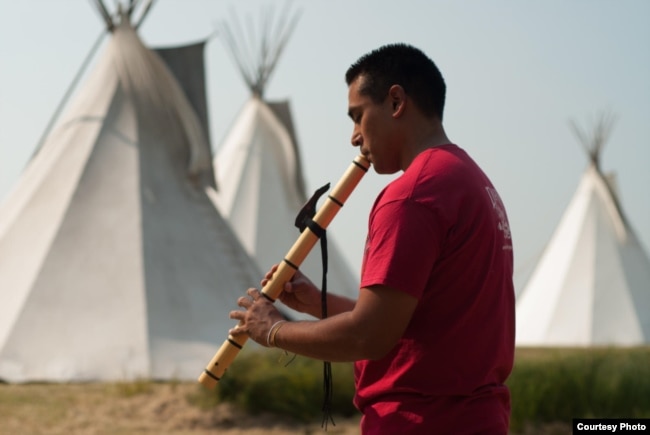 Technically, playing an inauthentic flute violates the U.S. Indian Arts and Crafts Act, passed in 1990 to ban the sale of goods falsely labeled "Native American. But there is nothing to stop non-Native performers from falsely claiming Native American heritage.

"It's not so much the fact that they are playing the flute that bothers me. It's the fact that a lot of them are non-Native and try to play the part of a Native, wearing what they think is Indian' attire. It's offensive, and it perpetuates the stereotype that Native Americans are still running around as they did in the past," said Thompson. 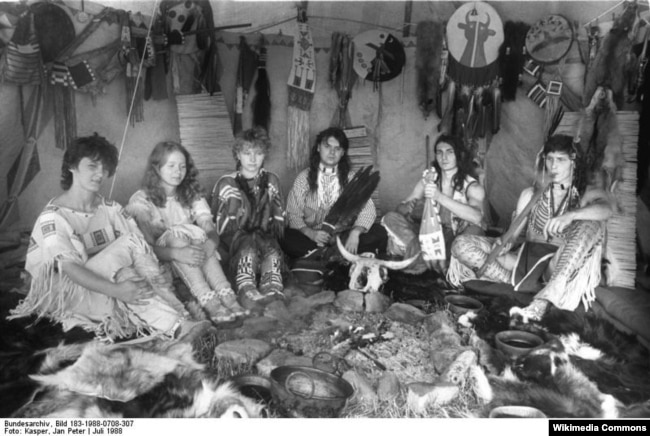 A group of citizens of former Czechoslovakia portraying Native Americans at an "Indianistik" meeting in 1988. Indian hobbyism--the desire to dress or live like traditional Native Americans--has always been popular in Eastern Europe.

Thompson grew up hearing traditional Ojibwe music, but it wasn't an important part of his life until he left the reservation.

"I went to Marquette University, where there weren't any other Native kids," he said. "I was still in Wisconsin, but it was a foreign environment."

Homesickness led him to the music of Navajo/Ute flutist Raymond Carlos Nakai, which evoked memories of his childhood.

"One of the first stories I ever heard came from the elders, who talked about trees," Thompson said. "I remember them saying trees sing to us and give us guidance.I think I was four, and that story came to mind 15 years later when I first heard Nakai playing."

It was then, he said, he understood what the elders had been trying to tell him: Trees do sing — through flutes carved from their wood.

Thompson bought his first flute from a non-Native vendor at a cultural festival. He taught himself to play, and as he learned, he felt moved to connect to the music of his ancestors — music that preceded government assimilation policies that nearly killed off the Ojibwe language, culture and religious traditions.

"I went out to museums to research actual instruments that were seized 200 years ago and taken into collections," he said. "Store-bought "Native" flutes are similar in construction, but they are tuned to a minor Western music scale. But an authentic one would be tuned to the maker himself."

Traditionally, players carved their own instruments from a single piece of wood — cedar, for example, or ash. Each flute would have two chambers, which allowed the player to breathe, Thompson explained.

No two instruments would have been alike.

"The length of the instrument would be the distance from that person's armpit to his first knuckle," he said. "The width would be the same as the width of his thumb. Even the spacing of the finger holes is calibrated to the player's body."

The number of open holes carved into the flute varies.Thompson owns several flutes, some he made himself and others custom made. Some have only four holes, which can produce eight notes. Others have five and six holes, allowing for greater range in melody.

The result is a sound unique to each player — a deep and clear tone that Thompson says "touches a lot of people."

He has wanted to perform at NMAI for at least a decade.

"NMAI has a program called The Art of Storytelling." My performance is unique, in that I try to reintroduce stories and music from history. Songs I've learned that were recorded in the early 1900s, before our culture got erased," Thompson said.

The stories don't just speak to what was lost, but what has survived. And some carry messages that are universal:

"If you take all the four-leggeds, those who walk on all fours, from the Earth, life on Earth would not be able to sustain itself.

"If you take all the winged ones, those that fly in the sky, life on Earth would not be able to sustain itself.

"If you take away all the plants from the Earth, life on Earth would not be able to sustain itself.

"If you take away all the water, and those that live in water, from the Earth, life on Earth would not be able to sustain itself.

"If you take away man from the Earth, life on Earth would flourish."