A trail cam photo shows a grizzly bear roaming Wapusk National Park in Manitoba. The park is located about 200 km. from the Manitoba/ Ontario border.  Photo: Univ. of Saskatchewan

A new study has raised some interesting questions about the status of grizzly bears in the far northern reaches of northwestern Ontario.

The report, titled Novel Range Overlap of Three Ursids in the Canadian Subarctic was published in Arctic Science. The study has proven the presence of polar bears, black bears and grizzly bears within Manitoba's Wapusk National Park. It is the first time a peer reviewed scientific paper has reached this conclusion.

Using trail cameras in the park, researchers were able to record images of the three bear species over 400 times between 2011 and 2017. The different types of bears were not seen together, but were found to be in the same areas.

Douglas Clark, of the University of Saskatchewan, is a co-author of the report. He said there is evidence grizzly bears are in the midst of a range expansion in the north of Canada.

"I think it's entirely possible that grizzlies may have or will show up in northern Ontario," he said." It's very likely that these bears in northern Manitoba have come from a source population in Nunavut, that is expanding east out the the Hudson Bay coast ... and to the south east, into Manitoba."

Clark noted that Wapusk National Park is about 200 km north of the Manitoba/Ontario border.

He said although he is not aware of any research on grizzly bears in northern Ontario, he has come across at least one memorable report of them in the province. 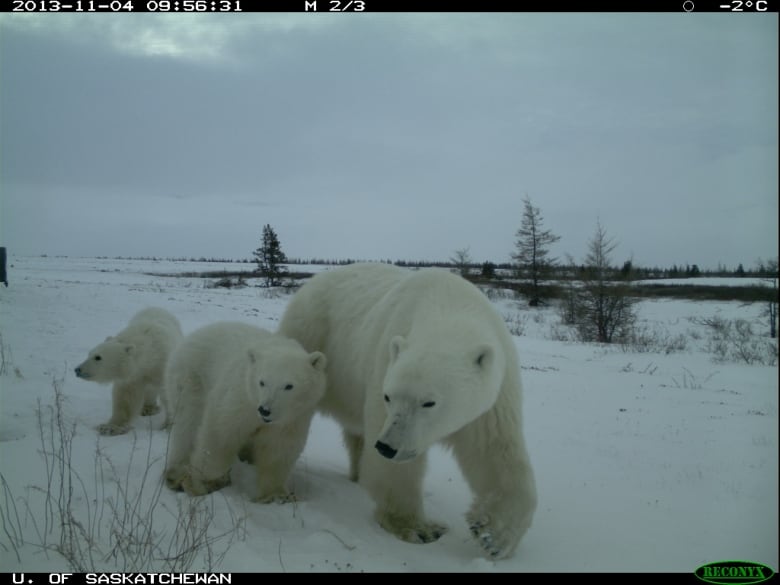 This polar bear sow and cubs was caught on trail camera in Manitoba's Wapusk National Park.  Photo: Univ. of Saskatchewan

"I recall years ago reading a very old management plan for Polar Bear Provincial Park in northern Ontario, in which there was mention of a grizzly bear being shot in the 1980s," he said. "But without finding that document — which I havent seen in over 20 years — I wouldn't hang a whole lot on my recollection of that."

Yet Clark suspects the nature of the beast, and the similar habitats found in northern Manitoba and northern Ontario raise the possibilty of grizzly bear gaining a foothold.

"I would be really curious to hear from folks in northern Ontario, what they think about this and whether people may have seen them already," Clark said. "Which, given the large distances grizzly bears can travel, wouldn't surprise me at all."

To read the original article and read related reporting, follow this link to the CBC News website.https://www.cbc.ca/news/canada/thunder-bay/grizzly-bears-northern-ontario-1.4981094