Grooming machines, operated by volunteers, will soon be hard at work along the numerous snowmobile trails in northwestern Ontario. (Adrian Tessier)

While a large snowstorm that battered Thunder Bay and the Lake Superior north shore over a 24 hour period last week led to messy roads and power outages, it's been all good news for enthusiasts of a number of outdoor sports and activities.

The storm, which lasted from Thursday to well into Friday morning, dumped about 30 centimetres of wet, heavy snow at the Thunder Bay International Airport, but weather officials said other parts of the city likely received more.

That kind of snow pack is needed so grooming machines can start working on the thousands of kilometres of snowmobile trails around Thunder Bay and to the west, said Adrian Tessier, the president of the Northwestern Ontario Snowmobile Trails Association.

"We've been patiently waiting for snow to come," Tessier told CBC News. "So, this is really, really good news for us ... as much as the people that shovel driveways don't like it, those of us that groom trails think it's the greatest thing going."

Tessier — himself a long-time trail groomer — added that there needs to be about 30 to 45 centimetres on the ground for the machines, and the volunteers who work them, to do their jobs.

"The groomers are all set to go." 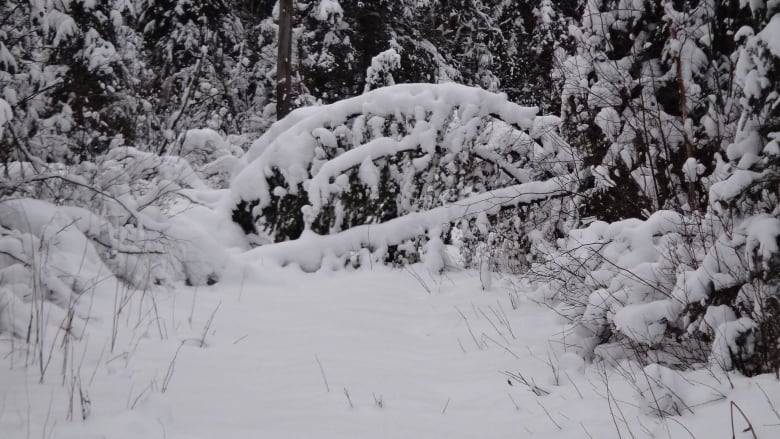 Heavy snow can knock trees down across snowmobile trails, meaning extra work for the people tasked with clearing them. (Thunder Bay Adventure Trails/Facebook)

The abundance of wet snow can, however, potentially make that job a bit harder if enough trees fall down across the trails, Tessier said.

"We're really hoping that this isn't going to give us memories from a year ago, October, when we had that snow and ice storm knock down trees, took out over 900 kilometres of trail," he said.

Tessier added that he's "fully expecting" some trees to be on the ground but people who operate the groomers carry equipment like chainsaws and axes to deal with fallen vegetation.

"Some trees you can push out of the way with the groomer, some of them you've got to cut with a chainsaw," he said.

To read the original article and see related stories, follow this link to the CBC News Thunder Day website.  https://www.cbc.ca/news/canada/thunder-bay/snowstorm-nwo-snowmobile-trails-1.4960850