Researchers are studying whether it's possible to reintroduce the elk to the northeastern part of the state. Photo:  Marshall Deters | Minn. DNR via AP

Ever wonder why there's a city in Minnesota named Elk River?

Because well over a century ago, Minnesota was elk country. Herds of the majestic animal, with their massive racks of antlers, roamed almost the entire state.

But hunters and settlement pushed them to the brink of statewide extinction by the early 1900s. The last native elk was seen in far northwestern Minnesota in 1932.

A few years later wild elk were reintroduced, but today there are only about a hundred left, confined to three tiny herds in the northwestern corner of the state.

But now there's a movement gaining momentum to possibly reintroduce elk to the northeastern part of the state, where researchers are finding there is potentially both the habitat, and the public acceptance, that would be required to bring them back.

With financial backing from the state of Minnesota, the Fond du Lac Band of Lake Superior Chippewa and the Rocky Mountain Elk Foundation, researchers from the University of Minnesota have spent the last three years surveying potential habitat for elk in three areas of northeast Minnesota: the Cloquet Valley State Forest north of Duluth; the Fond du Lac State Forest and Indian reservation near Cloquet and the Nemadji State Forest, near the Wisconsin border.

They also are beginning to sift through the results of public opinion surveys sent out to 8,500 landowners and residents of towns near the regions where elk could potentially be reintroduced.

And while the results are still preliminary, those surveys suggest that nearly 80 percent of rural landowners, as well as residents of nearby towns near the study areas, support restoring wild, free-ranging elk to this part of Minnesota, said Mike Schrage, wildlife biologist with the Fond du Lac Band.

That public support is critical, because on the opposite side of the state, elk have often feasted on farmers' crops. Because of the tension, in 2016 the state Legislature passed a law prohibiting the DNR from expanding the elk herd in northwestern Minnesota.

"Without enough public support, this idea would probably be dead in the water," said Schrage. "It would be difficult to successfully turn loose a big hairy animal like an elk on the landscape without support from the public and landowners for doing it."

The past two summers researchers have also measured potential elk forage and the suitability of habitat for elk in the three study areas, both on private and public land.

They're still crunching the data, but Schrage said it appears there's more than enough food for elk to thrive in the region. 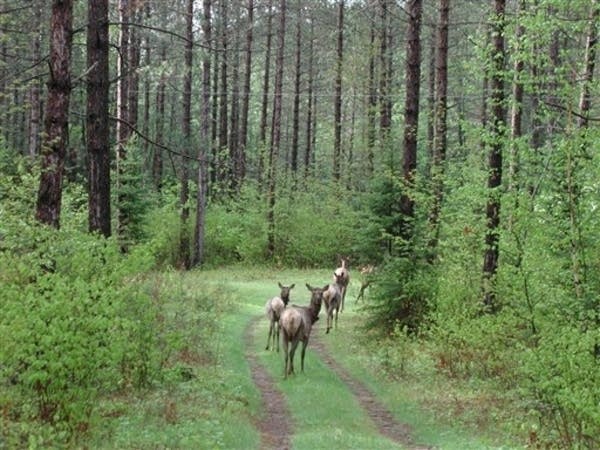 About a dozen states have brought elk back in the past few decades, including Wisconsin, which introduced a herd just south of Lake Superior in 1995, and added still more animals a few years ago. Matt McKay, Wisconsin DNR via AP

The three state forests researchers are studying all include areas that are logged for aspen trees. That creates a lot of new habitat for young aspen trees, which provide ideal forage for elk. "They like aspen, they like grass, but they can eat a lot of different things," said Schrage. "I'm pretty confident in the end we will find that there's enough habitat. It's just quantifying where is it and how much of it there is."

Scientists are currently mapping the results of the habitat and vegetation studies, and then plan to overlay them with the data from the public opinion surveys, Schrage said.

They're due to submit their final report to the state in the summer. Then it will be up to policy makers to decide whether to bring elk back to the region, something that would require "a significant chunk of funding," he said.

But Minnesota certainly wouldn't be the first state to do it. About a dozen eastern states have brought elk back in the past few decades, including Wisconsin, which introduced a herd just south of Lake Superior in 1995, and added still more animals a few years ago.

Kentucky, Schrage said, is probably the "poster child" for elk reintroduction. That state brought in 1,500 elk about 20 years ago. Now they have a population of more than 10,000.

Animals from Kentucky were used to supplement Wisconsin's herd, and Schrage said that state could also be a source for Minnesota if the state decides to follow suit.

But Schrage said even if that decision is made to move forward, the earliest Minnesotans would likely see a new herd of elk on the landscape would likely be three or four years from now.

"I think this needs to be a careful, deliberate process," he said.

To read the original article and see related stories, follow this link to the MPR News website.  https://www.mprnews.org/story/2018/12/10/once-hunted-to-extinction-elk-poised-to-possibly-return-to-...