Great Lakes in the bullseye of Climate Change It’s the most comprehensive scientific study to date on the effects of global warming on the U.S. economy, public health, coastlines and infrastructure. And the report says the Great Lakes Region is smack-dab in the center of some of the most damaging impacts from climate change.

The 1,656 page National Climate Assessment, released by the White House this past week, predicts that extreme storms, flooding, and heatwaves will fuel more record wildfires in California and cause crop failures in the Midwest. The report says the changing climate will lead to heat-related deaths, and rising water levels will destroy roadways and create life-threatening infrastructure collapses that will take a huge economic toll by the end of the century. One part of the report predicts agricultural yields could drop to 1980 levels by the middle of this century.

The findings reveal the total cost to the U.S. economy of projected climate impacts will be an estimated $141 billion from heat-related deaths, $112 billion from water level rise and $32 billion from infrastructure damage by the end of the century.

The authors of the report offer three solutions that could help minimize the impact of global warming: putting a price tag on greenhouse gas emissions; establishing government regulations on greenhouse gasses; and investing in clean energy research.

Two University of Michigan researchers authored the Midwest chapter of the report. They concluded the Great Lakes region will most likely not only face adverse human health impacts from increased flooding, increased heat, and lower air and water quality, but that agricultural productivity and forest health will decline. 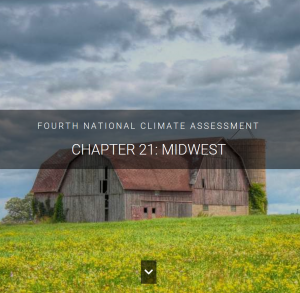 They say the Great Lakes, which are already under stress from pollution, nutrient and sediment inputs from agriculture and invasive species, will face even more damage as lake surface temperatures increase, lake ice cover declines and summer evaporation rates increase. The study says “at-risk communities in the Midwest are becoming more vulnerable to climate change impacts and how they are working to build adaptive capacity.” In addition, tribal nations could be especially vulnerable because they rely on natural resources for their cultural, subsistence, and economic needs, which will be further threatened.

“Climate change will only further exacerbate the vulnerability of populations under stress in the Midwest because of economic and social inequality, such as poor communities in legacy cities, tribes and Indigenous populations,” said Maria Carmen Lemos, professor and associate dean at the University of Michigan School for Environment and Sustainability, who was one of the Midwest chapter authors. “However, the chapter also finds that the Midwest may actually experience migration into the region because of climate change. Because this is a long-term prospect, the report may give cities the impetus to understand climate impacts and adapt to them to better prepare for this possibility.”

The assessment report, which is required by Congress, was performed by 300 scientists who began their work in 2014 immediately following the release of the previous National Climate Assessment .The report is issued every 4 years and involves 13 federal agencies.

The Trump administration first issued a statement saying the report is “largely based on the most extreme scenario” and that the next report will be more balanced. Then, two days after the release of the study,  President Donald Trump said he didn’t believe his own administration’s report.

Authors of the National Climate Assessment (NCA) say the Trump administration did not change the report or its language. However, the timing of the release — the day after Thanksgiving — is being seen by many as an effort to try to dampen its impact.

To read the original article and read related stories, follow this link to the greatlakesnow.org website.  https://www.greatlakesnow.org/2018/11/great-lakes-in-the-bullseye-of-climate-change/