What the Trump administration climate report says about the Midwest Among the projected effects of climate change is that fewer trees in the Midwest will grow and “widespread tree mortality” is even possible as temperatures rise.  Photo:  Creative Commons/Flickr/Brett Whaley

The federal government’s newly released climate change report outlines the devastating effects rising temperatures are expected to unleash on the United States in coming years. More wildfires out west and a shrinking economy are just two byproducts of human-caused greenhouse gas emissions forecast by scientists and a large group of agencies within President Donald Trump’s administration.

But more locally, the report also spells troubles for Minnesota and its surrounding states. Based on extensive research, the government predicts global warming to present threats to human health and infrastructure in the region, as well as to some of the state’s most important crops, animals and ecosystems.

While many of the findings are not a surprise to those who have studied global warming, the report, mandated by Congress and based on more than 1,000 previous studies, reinforces the findings of other scientists and governments worldwide and makes specific forecasts for regions of the U.S. sure to grab the attention of citizens and politicians.

Here are a few takeaways from the report’s findings about the Midwest:

1. The economic impact could be significant

The report says rising global temperatures do not bode well for the Midwest agriculture industry. There have been studies saying that a longer growing season could have some benefits for parts of the region — especially in a cold state like Minnesota. But from a wider perspective, the report says by 2050 climate change could slash productivity overall in the Midwest to “levels of the 1980s” without a leap forward in technology.

In fact, global warming is expected to create a smorgasbord of problems for Midwestern farmers. The report says temperatures are rising above optimum conditions for crops, and heat waves can even threaten their reproductive functions.

That could be an issue even in northern Minnesota, where the current average annual 5-day maximum temperature, a measure of heat extremes, reaches only about 88 degrees, according to the report. By the middle of the century, it’s expected to stretch between 93 and 95 degrees. Failure for reproduction for corn comes at 95 degrees, the report says.

“Increases in growing-season temperature in the Midwest are projected to be the largest contributing factor to declines in the productivity of U.S. agriculture,” the report says. “In particular, heat stress in maize during the reproductive period is projected by crop models to reduce yields in the second half of the 21st century.”

Hotter weather also is a boon for insect pests that harm agriculture. Beyond helping existing ones, a warmer climate is expected to bring new pests and the pathogens that cause diseases in crops to farther north, according to the report. More spring rainfall and humidity is expected, too, which can disrupt planting, increase soil erosion and amplify or increase fungus and disease outbreaks.

And while the predicted effects could be acute in rural areas of Minnesota where production of corn, soybeans and other crops powers the economy, a dented wallet will not be unique to farmers, the study predicts. Overall, climate change could cut the U.S. economy by as much as 10 percent, the government says.

2. Our ecosystems will change

The report also forecasts broad harm from climate change to our region’s wilderness and waterways. For instance, fewer trees in the Midwest will grow and “widespread tree mortality” is even possible as temperatures rise. Drought and warmer winters harm trees by harboring pests and reducing snowpack that insulates trees from frost damage, among other effects.

In Minnesota specifically, government scientists have for years said the range of Boreal forests that now populate the northern part of the state will shrink while species of trees more common in the southern portion of the state might creep north.

Warmer winters also could lead to extinction of cool and coldwater fish in some lakes across the Midwest, including the Cisco, which is also known as Tullibee or Lake Herring in Minnesota.

In the Great Lakes, winter ice is declining and water levels are “more likely than not” to drop. Warmer water temperatures are expected to reduce algae and zooplankton, that, according to the report, “form the basis of aquatic food webs.” This could lead to “cascading effects on the health and abundance of species across all levels of Great Lakes food webs,” the report says.

In the Great Lakes, winter ice is declining and water temperatures are increasing.
Invasive species could also get a boost in the lakes. Sea lamprey, a parasitic fish, have a greater impact on other fish when they’re larger, and research has found they’re bigger in years when there are more days in which water temperatures in Lake Superior rise above 50 degrees, according to the government report.

In general, climate change is expected to aid invasive species and further stress native species such as monarch butterflies that have suffered from other problems like habitat loss due to development and agriculture.

All of this would have economic impacts of its own; the economic output of the forestry sector in the Midwest alone totals roughly $122 billion each year, according to the report.

3. Human health and infrastructure are at risk

The government report says it won’t just be the economy and wildlife affected by global warming — rising temperatures will lead to deaths related to extreme heat and poor air quality. 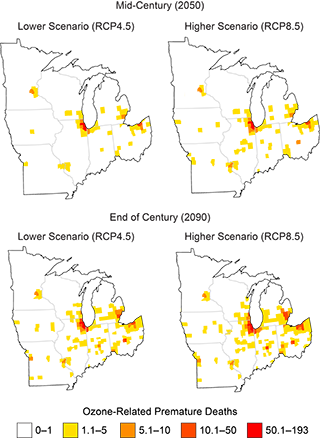 Without anything to mitigate poor air quality, which climate change is expected to produce with higher frequency, between 200 to 550 more people will die prematurely each year in the Midwest by 2050.

Midwest cities are also expected to have the largest increase in deaths related to extreme heat under some scenarios studied by the government, without action to offset climate change. At even more risk are vulnerable populations like the elderly in cities that are farther north and don’t typically have high temperatures.

Besides the heat, heavy rains are expected to overwhelm stormwater systems, flood property and infrastructure like roads in the Midwest more often due to climate change. Those types of storms are projected to increase with global warming, and can sometimes threaten lives.

There is another local twist to all this: The government report identifies Minnesota and the Twin Cities as two of the few places where it’s possible “the value of warmer winters outweighs the cost of hotter summers.” That’s because a little extra heat — and less extreme summer temperatures compared to other states —  could lead more people to migrate to the state and boost the economy, the report says. But it also says more research on this topic is needed, and notes the Midwest still faces some of the greatest risks from climate change.

Walker Orenstein covers the environment and workforce issues for MinnPost. He previously covered state government and politics for The (Tacoma) News Tribune. A St. Paul native, he is a graduate of the University of Washington. He can be reached at [email protected], and you can follow him on Twitter at @walkerorenstein.

To see the original story and read environment related articles, follow this link to the MinnPost website.  https://www.minnpost.com/environment/2018/11/what-the-trump-administration-climate-report-says-about...