This timeline chronicles the last voyage of the Edmund Fitzgerald Stern shot of the Edmund Fitzgerald in the St. Marys River not long before her sinking on Nov. 10, 1975. Photo courtesy of the Great Lakes Shipwreck Museum, Roger LeLievre.

LAKE SUPERIOR, MI - It was 43 years ago today that the Edmund Fitzgerald was being loaded with 26,000 tons of iron ore, prepped for what would become her doomed final voyage.

Once the largest ship on the Great Lakes, the 728-foot Fitzgerald left Superior, Wis. at 2:15 p.m. on Nov. 9, 1975. Her crew planned to cross Lake Superior to deliver the load at Detroit's Zug Island.

But a day later, she was gone, broken in two and lying on the lake's bottom in 530 feet of water, all 29 souls aboard lost.

But her captain and crew were also sons, brothers, husbands and fathers. They hailed from Michigan, Ohio, Wisconsin, Minnesota and beyond.

Here are the highlights of the Fitzgerald's final trip and the fierce, hurricane-like storm that sank her. Investigators would later say that in the big freighter's last hour, she battled sustained winds of 60 mph, and waves higher than 25 feet. She may have even encountered "The Three Sisters" - a trio of rapidly-hitting waves that are higher than the others around them. The Fitzgerald was in the "worst possible place" as she tried to make for the shelter of Michigan's Whitefish Bay.

2:15 p.m. The Edmund Fitzgerald, captained by Ernest McSorley, finishes loading 26,116 tons of taconite in Superior, Wis., and departs for Detroit's Zug Island. The storm that would sink the ship is gathering force over Kansas on a northwest path toward Lake Superior.

5 p.m. Fitzgerald encounters Arthur M. Anderson, captained by Jesse Cooper, and the two ships proceed east on similar courses, separated by about 10 to 20 miles. Three hours later, the National Weather Service issues a Gale Warning for all of Lake Superior.

2 a.m. Fitzgerald and Anderson agree to take northern route across the lake for protection from the gale. NWS upgrades forecast to a Storm Warning, predicting northeast winds 35 to 50 knots and waves 8 to 15 feet.

2:45 p.m. Anderson changes course to avoid Six Fathom Shoal area north of Caribou Island. Fitzgerald is about 16 miles ahead. Heavy snow begins to fall and the Fitzgerald is lost from sight. It's the last time the ship would be seen by human eyes.

3:30 p.m. Fitzgerald calls Anderson to report damage and say the ship would slow to let Anderson catch up. Minutes later, Coast Guard issues directions for all ships to find safe anchorage because the Soo Locks have been closed.

McSorley: "Anderson, this is the Fitzgerald. I have sustained some topside damage. I have a fence rail laid down, two vents lost or damaged, and a list. I'm checking down. Will you stay by me til I get to Whitefish?"

Cooper: "Charlie on that Fitzgerald. Do you have your pumps going?"

McSorley: "Yes, both of them."

4:30 p.m. Fitzgerald passes 3 to 5 miles east of Caribou Island. Many theorize the ship unknowingly struck the poorly marked 6 Fathom Shoal on the island's north side, but that has never been conclusively proven. The debate rages to this day.

5:30 p.m. Fitzgerald is advised by Swedish ship Avafors the Whitefish Point beacon and light are disabled by power failure.

Avafors: "Fitzgerald, this is the Avafors. I have the Whitefish light now but still am receiving no beacon. Over."

Avafors: "The wind is really howling down here. What are the conditions where you are?"

Avafors: "What's that, Fitzgerald? Unclear. Over."

Fitzgerald: "I have a bad list, lost both radars. And am taking heavy seas over the deck. One of the worst seas I've ever been in."

Avafors: "If I'm correct, you have two radars."

Fitzgerald: "They're both gone."

7:10 p.m. Anderson calls Fitzgerald with navigation instructions. The ship is about 10 miles behind the doomed freighter.

Anderson: "Fitzgerald, this is the Anderson. Have you checked down?"

Fitzgerald: "Yes we have."

Anderson: "Fitzgerald, we are about 10 miles behind you, and gaining about 1 1/2 miles per hour. Fitzgerald, there is a target 19 miles ahead of us. So the target would be 9 miles on ahead of you."

Fitzgerald: "Well, am I going to clear?"

Anderson: "Yes. He is going to pass to the west of you."

Fitzgerald: "Well, fine."
Anderson: "By the way, Fitzgerald, how are you making out with your problem?"

Fitzgerald: "We are holding our own."

Anderson: "Okay, fine. I'll be talking to you later."

7:15 p.m. Fitzgerald disappears from Anderson radar. More than an hour later, the Coast Guard begins an active search. The 29 crew members aboard all perish. 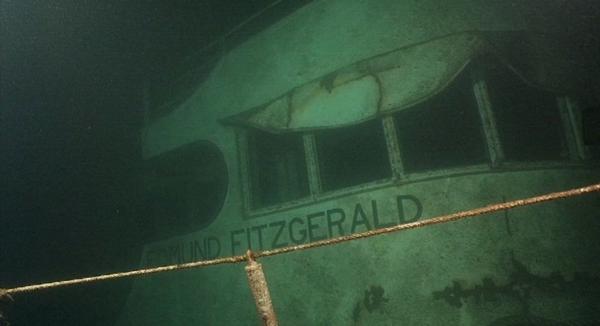 Image of the Edmund Fitzgerald shipwreck taken during a dive in 1995 to recover the ship's bell. The ship sank in a storm off Whitefish Point in Lake Superior on Nov. 10, 1975.

To read the original article, see an interactive map of the Fitzgerald's voyage and read related coverage, follow this link to the mlive.com website.  https://www.mlive.com/news/index.ssf/2018/11/edmund_fitzgeralds_doomed_jour.html
News