Luring More Women To Fishing In The Upper Great Lakes The number of Americans who fish is in decline and that decline has had an impact on conservation projects, because hunting and fishing licenses help fund everything from habitat restoration to clean water programs.

So there are efforts to lure more anglers to the sport — and those efforts seem to be working, as more and more young women are taking up fishing.

Recently, a whole band of women spread out along the bank of the Two Hearted River in Michigan's Upper Peninsula. They were part of a steelhead fishing class put on by the Michigan Department of Natural Resources called Becoming an Outdoors Woman (BOW). The goal is to inspire women to fish.

Kristy Taylor was part of the class. She stood on the bank of the river on a cold, bleak morning. 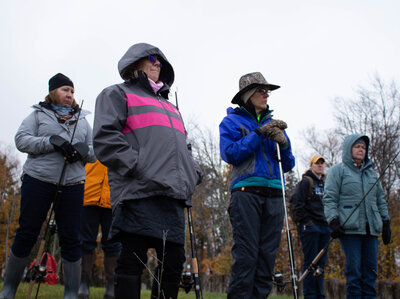 Instructor Katie Urban stood right by Taylor as she cast her line into the Two Hearted. "Whip it," Urban said, just before Taylor cast.

They were tracking a fish. It was swimming close to surface, leaving a swirl of water behind it as it moved slowly.

"You see it?" Urban asked. "Alright she's coming back to this side; she's going to that pocket."

The fish moved towards them, then disappeared and resurfaced farther down the river.

They took off running, scrambling up the dunes, the dark-stained Two Hearted River like a ribbon of tar below them.

In 2016, about 14 percent of Americans fished, and most of them were men. But a recent study on the Upper Great Lakes indicates female participation is on the rise. It found that fishing license sales increased among female anglers by about 4.5 percent between 2000 and 2015. That's an additional 43,000 female anglers.

Richelle Winkler is the principal investigator on that study and an associate professor at Michigan Technological University. She says younger women in particular are getting involved.

"Young women today are about two times more likely than women born in 1960 to buy a fishing license," says Winkler.

Winkler and Ph.D student Erin Burkett based the findings on the number of fishing licenses sold in Minnesota, Michigan, Wisconsin, Indiana and Illinois.

"We have a waiting list for every program we do," she says.

Winkler says it's not clear yet why more women are fishing. She's looking into it, but for now, she has a hunch.

"I think it's part of a broader cultural pattern of the world opening up a bit to women's participation in activities that have traditionally been seen as more masculine," she says.

The men went out fishing and hunting and the women — we just never thought about it.

Kristy Taylor was born in 1981; she's 37. She says she learned to fish when she was about five or six.

"My parents divorced when I was really young," says Taylor. "So whenever I would be with my dad, that was the activity he knew best. So he would take my sister and I both to go fishing."

But not all the new fisherwomen are young. Ellen Rice — another class participant — is 63 and fishing for the first time. She had a completely different experience growing up.

"The men went out fishing and hunting and the women — we just never thought about it," say Rice.

Richelle Winkler of Michigan Tech says new anglers like Taylor and Rice, who purchase state fishing and hunting licenses, are essential for conservation.

"Habitat restoration programs that keep our water clean and that keep invasive species in check — all of those kinds of programs are funded by fishing license sales," says Winkler.

If more women keep fishing, Winkler says angler participation could stabilize. But she says that probably won't stop the decline in conservation money, because hunting participation is in serious decline with no signs of changing.

Taylor says fishing for her is about being in nature; it's also empowering.

When Kristy Taylor got to her new spot on the Two Hearted, a man at a campsite across the river spotted the fish she'd been chasing. He got out his fishing rod, lit a cigarette and cast for the fish.

The bait landed right on the fish, but the fish turned away.

Then the fish came right to the shore by Taylor, and she lightly tossed her bait sack filled with bright red coho salmon eggs in front of the fish. No interest there either.

In the end, Taylor didn't catch a fish. All she hooked was some dark, wet sticks.

"I've got salad to go with dinner," she joked.