A terrific book on Great Lakes water conflicts gets a timely, thorough update The news back in 2006 was that the Great Lakes Compact was essentially finalized, creating an eight-state body that would fend off unwise withdrawals and otherwise manage use of the world’s greatest freshwater resource for the region’s shared benefit.  Photo:  Creative Commons/Flickr/Jim Liestman

You can get the feeling on reading Peter Annin’s new edition of his terrific book, “The Great Lakes Water Wars,” that much has happened — but too little has changed — in the control of self-interested resource grabs since the first edition came out a dozen years ago.

The news back in 2006 was that the Great Lakes Compact was essentially finalized, creating an eight-state body that would fend off unwise withdrawals and otherwise manage use of the world’s greatest freshwater resource for the region’s shared benefit.

It was already clear that the real threats would not be tankers sucking up water for sale in Asia, or interstate pipelines enabling its transport to the arid Southwest, but a host of smaller “diversions” by states that possessed Great Lakes shorelines and also, too often, an inflated sense of entitlement to the lifeblood lapping at their beaches.

Typically, each of the eight states reflexively opposed the others’ efforts to use the big lakes’ water beyond the small basin that replenishes it, while fiercely defending their own pumping. Often they found ways to work around restrictive requirements of the Great Lakes Charter, an earlier but nonbinding version of the Compact, or the binding but oft-ignored Water Resources Development Acts issued by Congress.

In 2018, the news includes discouraging examples of business as usual despite the Compact, with this marquee item revealed by Annin for the first time:

In 2010 the state of Wisconsin, anticipating a massive expansion of residential, commercial and industrial development in the small southeastern community of Pleasant Prairie, acted unilaterally and virtually in secret to treble the city’s authorized allotment of Lake Michigan water from the previous level of 3.2 million gallons per day to 10.69 mgd.

For perspective, that is substantially more water than the 8.62 mgd allotted to Waukesha in the years-long, intensively negotiated and bitterly disputed diversion that became the Compact’s first test case (and whose historic resolution spurred Annin’s update). It is also,  more importantly, exactly the kind of under-the-radar water grab the Compact was supposed to dissuade.)

Indeed, Pleasant Prairie now stands as the largest permitted water diversion in Wisconsin history, as the Milwaukee Journal-Sentinel observes in an article prompted by Annin’s revelation, though it’s not hard to imagine that record falling in the not so distant future.

Pleasant Prairie lies right on the basin boundary line, a bit south of Kenosha, and as a “straddling city” it didn’t need to go through the long application process required of, say, Waukesha, which lies outside the basin but within a “straddling county”; state-level signoffs are sufficient. More important, it lies within what Annin calls the Chicago-to-Milwaukee metroplex, an area of exploding growth that likely will be a main battleground over diversions in the years to come. 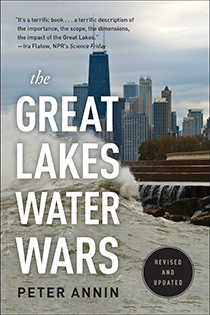 The official view from Madison, as expressed to the Journal-Sentinel’s Lee Bergquist by officials of the Department of Natural Resources, is that Pleasant Prairie’s authorization is a “grandfathered” diversion that can be adjusted without any public hearings or notice, either to the Compact or to the public. A former DNR official, who says he didn’t notice the adjustment at the time it was made, told Bergquist he expects his staff treated the matter as a routine “updating of a permit” that needn’t be flagged for discussion within the department.

And, Annin told me, his own reporting turned up no information demonstrating that this was in any way illegal.

“The DNR seems to have done what sounds like the bare minimum by filing paperwork with the regional body and Compact Council in Chicago,” he said. And while “it is remarkable that this remained essentially secret for so many years,” that may be mostly about watchdogs not yet knowing where to watch for such maneuvers:

A key factor was, the environmental community in particular, the general public, and journalists were so hyper-focused on Waukesha back then that they just dropped the ball on other things.

The Compact has been in effect for 10 years, but that’s not such a long time for an agreement that’s so complex, on issues where emotions run so high. So the Great Lakes community is still learning where to look for different types of information to stay on top of things.

Also, I think most people expected that with grandfathered diversions, the numbers would just stay the same — why would we pay attention? People are really shocked that a number would be “tweaked” by tripling it. And in the reporting that’s come out since, this was heavily driven by developers, not by the community itself — which is interesting, too.

Whether the increase will face a legal challenge is unclear, he said, as “the lawyers are still combing over it.” But even if the DNR did follow the law, and avoids or survives a legal challenge, “a lot of people feel this violated the spirit of the compact.”

And that rankles especially in the context of an agreement whose details of policy and definitions of terms were negotiated and renegotiated in an atmosphere of “brutal transparency, so nobody would be surprised by the final agreements.”

Scoring Waukesha as a win

That level of transparency also applied to the consideration, amendment and eventual approval of the Waukesha diversion, Annin feels, and he grades the outcome as a solid success.

Others, myself among them, felt differently. But I do respect Annin’s expertise in this area and I have to agree when he writes that “as shattered as some environmentalists were about the outcome, they played an enormously important role in reducing the size of Waukesha’s diversion” by more than 50 percent, in persuading the Compact Council to reject a dramatically expanded new service area for the city’s water utility.

As for the case’s precedential value, Annin writes that “some regional water managers openly wonder whether any more straddling-county applications will follow Waukesha, given the extensive time and money that was required to extract a unanimous Compact Council vote.” On the other hand, he says,  “sooner or later another community is bound to apply for its own straddling-county diversion. The magnetism of Great Lakes water is just too strong.”

So the larger question, I think, may be whether the Compact — supported  by its Council of eight governors, its regional administrative body, and all the avenues of engagement open to an informed public — is up to resisting all of the water grabs such  magnetism must attract. 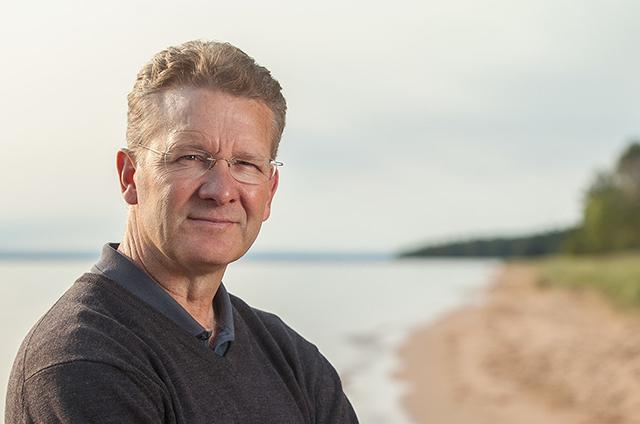 Peter Annin   Photo:  Courtesy of Northland College
Remember, the straddling-county application is the tough route to diversion, because it requires eight governors’ approval. Also, because it has long carried — and despite Waukesha may still carry — the presumption that denial is the default outcome.

Straddling-city cases, by contrast, require only state approval and, as Pleasant Prairie and a bunch of other pre-Compact examples show, these intramural contests are of a completely different sort. (Perhaps especially in Wisconsin — where, as Annin has found, at least 12 diversions were approved between 1990 and 2003, without any notice to other Great Lakes states and, in at least some cases, in apparent violation of federal law.)

Tracking their impact either individually or in sum remains difficult, Annin told me.

I was just on the regional body’s grandfathering database yesterday and some of these reported diversions in some jurisdictions don’t even have geographic names listed, so that makes it really hard for people to track or verify or double-check the data being reported [both on the authorized diversion volumes and the amounts actually being withdrawn].

The two jurisdictions that come to mind are Michigan and Ontario, and a lot of these are inter-basin transfers, from one lake’s basin to another — so there’s no threat to the water level of the Great Lakes overall, but they do have implications as the level flows from one lake to another.

And you can see that Ontario has the ninth-largest diversion, 27 million gallons per day, and there’s no place name next to it. It’s just in the province of Ontario. I’m not saying there’s anything untoward here, but why wouldn’t you specify the place by name? And it’s the same thing for Michigan.

And then we have the emerging case of what you might call the straddling-factory application, in the applications of Racine and its transboundary suburb, Mount Pleasant, where the Foxconn company hopes to build a $10 billion LCD-panel factory on the basin line; the plant would employ up to 13,000 people and use a whole lot of Lake Michigan water. As Annin writes:

The application requested 7 million gallons of water per day — 5.8 mgd for the Foxconn facility — roughly 40 percent of which (2.7 mgd) will be lost to consumptive use. The rest will be returned to Lake Michigan, as required under the Compact. By comparison, the highly controversial Waukesha water diversion will pull 8.2 mgd from Lake Michigan and return 100 percent of the water."

Wisconsin approved the application, naturally, and now Midwest Environmental Advocates has filed a lawsuit to overturn the diversion. The filing made history as the first litigation to invoke the Compact’s terms in making its case, but it continues an unfortunate history in which too many important decisions to safeguard the Great Lakes prove impossible to reach outside a courtroom.

Peter Annin will be doing a book tour in behalf of his second edition, and it includes appearances in St. Paul on Nov. 13 and in Duluth on Dec. 3.