Here is a reaction I can almost guarantee. Take your children to the new Bell Museum on Larpenteur Avenue, not far from the State Fair grounds, and watch their eyes when they see the 11-foot tall wooly mammoth and the smaller but impressive giant beaver. Their eyes will widen, and so will yours.

Then let them listen to the Ojibwe and Dakota children’s recorded voices speaking in native languages about animals in the three-dimensional dioramas. The clear, confident sound of a child’s voice is poignant and unexpected in a museum setting. Later you may wish to settle into the 120-seat planetarium for an interactive journey through space and time. 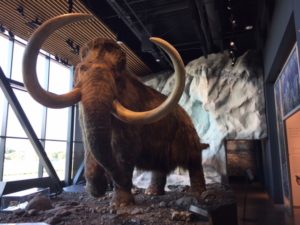 The Bell Museum, previously called the James Ford Bell Museum of Natural History, resided at a few locations on the East Bank of the University of Minnesota starting in 1872. The construction and move took almost three years at a cost of $79 million. It opened in July.

Every diorama part: hair, twig, leaves, feathers, walls and so much more, was transferred to new quarters at 2088 Larpenteur Ave. W., Falcon Heights.  Architecturally, the vast building is stunning and is organized topically from temporary exhibits on the first floor to second floor permanent galleries with four main themes: life in the universe, tree of life, web of life, and imagine the future.

Children will be drawn to the hands-on laboratories where they can touch a bison pelt, watch bugs crawl and hold skeletons. The Museum houses 4,000 specimens – those are in addition to the more than 1 million specimens residing with faculty curators on the University campus. The wooly mammoth exhibit – the first new Bell museum diorama in 60 years – is breathtaking and certain to dazzle children as well as adults. It weighs 500 pounds and is made of foam, fiberglass and fake fur. 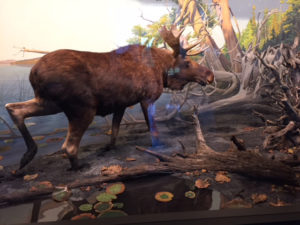 The dioramas that show our state’s natural biomes are beautifully presented following their disassembly, cleaning and reconstruction at the new location. The dioramas include sound – you’ll hear chirping birds native to northern Minnesota and you’ll hear the wind move through prairie grass when viewing the diorama from western and southern Minnesota.
Those from northern Minnesota are familiar with Shovel Point in Tettegouche State Park on the North Shore. A diorama set in that iconic location shows three wolves hunting with a display narrated in Dakota and Ojibwe by children from Bdote Learning Center in Minneapolis, a K-7th grade language immersion school.

Four of the dioramas at the Bell Museum now include Ojibwe and Dakota commentary. The children wrote most of the conversations used in the exhibits, said Cindy Ward-Thompson, a Bdote Learning Center founder and its current Director. Over a span of about four months, the kids reviewed photos of the dioramas, and talked about what they saw.

“They chose the words for the conversation,” Ward-Thompson said. “We used a lot of children in the process because we wanted to show others that Dakota and Ojibwe are still vibrant spoken languages and that the language is alive in children as well as elders.”