As lake invaders dig in, Minnesota worries what comes next Kevin Farnum pulls off a segment of starry stonewort from a mat of vegetation that was pulled up from Lake Koronis. Photo:  Paul Middlestaedt for MPR News

Standing on a small metal boat on Lake Koronis in Stearns County, Kevin Farnum watched a mass of green weeds being pulled up onto a conveyor belt.

"Here's a star, but it's really small," he said, pointing to a tiny, white, star-shaped nob called a bulbil. "Can you see the shape?"

The "star" is a dead giveaway that this is starry stonewort, a plantlike algae that has been causing major problems for Lake Koronis since it was discovered here three years ago. It was the first time the invasive had been found in a Minnesota lake. Since then, it's been confirmed in 12 others in Minnesota.

But it wasn't caught right away on Koronis. Starry stonewort can be mistaken for native weeds, and the infestation spread undetected to 250 acres of the 3,000-acre lake before the Minnesota Department of Natural Resources finally identified it.

Since 2015, the Koronis Lake Association, led by Farnum, has been fighting a costly battle to treat and control the grass-like algae that forms thick floating mats, making boating and swimming difficult — and choking out native plants — where it proliferates.

After testing different methods, researchers have found that mechanically pulling the starry stonewort, then treating it with herbicide helps reduce its mass. This year, some native plants are starting to grow back in the treated areas, Farnum said.

"What we learned in 2017 is we couldn't just walk away from it," he said. "But what we learned is if we're diligent and stay on top of it, we can maintain a very useable lake and what we think is a healthier lake."

Millions of dollars are spent every year in Minnesota to try to control aquatic invasives already in Minnesota and prevent them from spreading to more lakes. But the Lake Koronis experience raises a troubling question: Is the state prepared for the next invader?

Scientists and lake lovers are worried about invasive species causing problems in other states — hydrilla, northern snakehead and others — that could be on their way to Minnesota. 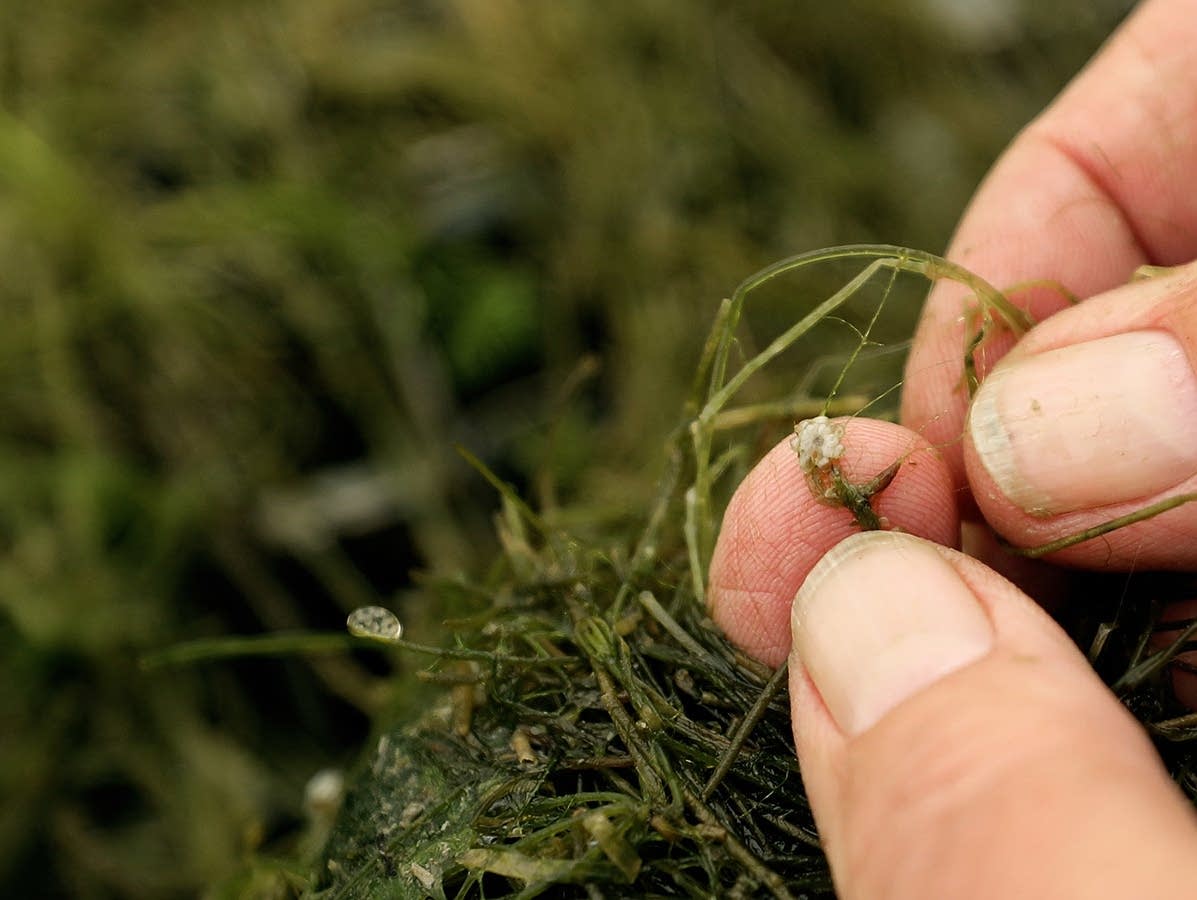 The unique aspect of starry stonewort is the star-shaped bulbs along its stems. Photo:  Paul Middlestaedt for MPR News

"We have reason to believe they would do well here and that they would cause significant harm here — ecological and economic and social harm," said Heidi Wolf, invasive species unit supervisor for the Minnesota Department of Natural Resources.

Part of the challenge of stopping future invaders, Wolf said, is the blind spots: "We can't know everything out there."

"Even though we might know something is a possibility, it's hard to be prepared for every possibility," she said.

Researchers also warn that the warming climate could contribute to the problem by giving invaders the opportunity to take hold in places where they've been unable to thrive in the past.

"We know that our lakes are changing, and they're changing dramatically across the state," said Doug Jensen, aquatic invasive species program coordinator with Minnesota Sea Grant, a research program focused on the state's aquatic resources. 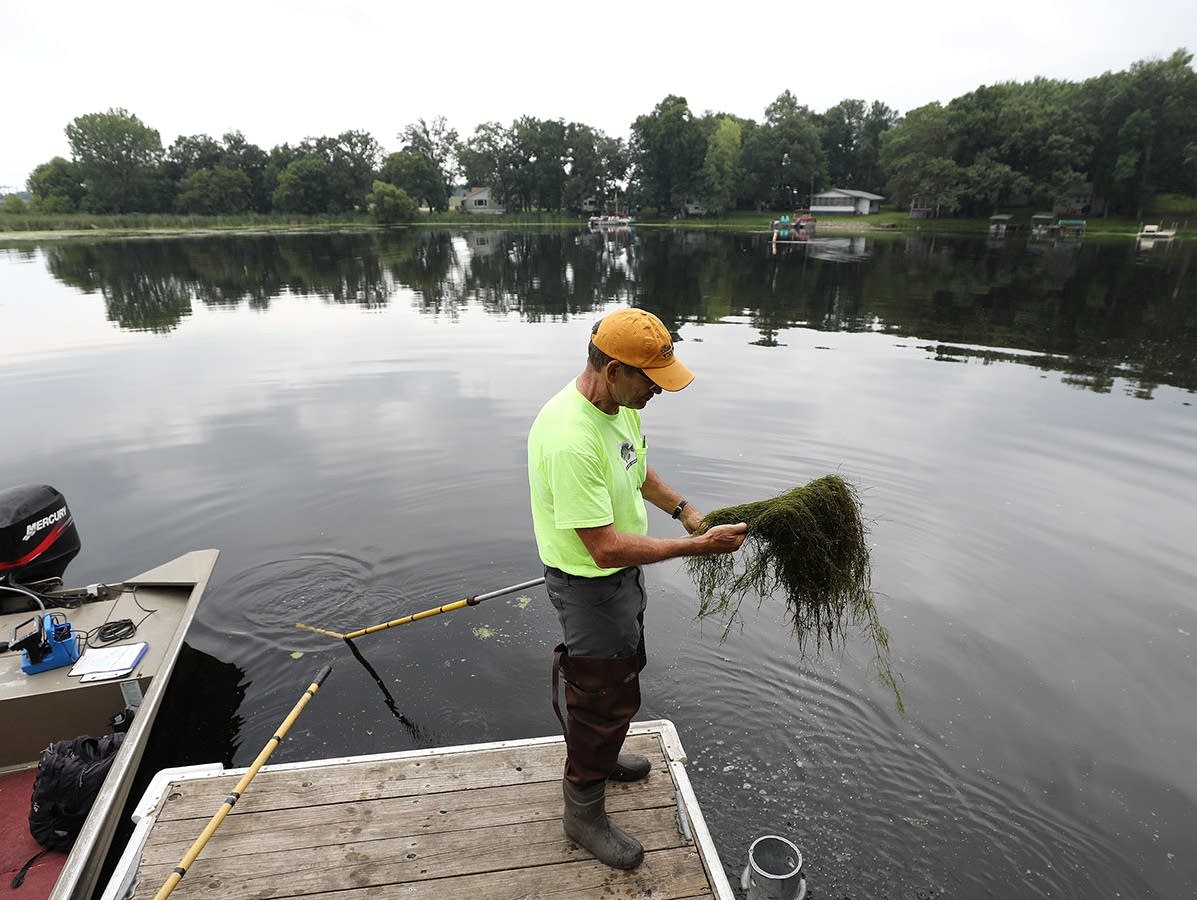 Aquatic scientist Steve McComas pulls up a mat of starry stonewort near a boat access on Lake Koronis in July. Koronis was the first Minnesota lake discovered to have starry stonewort, an invasive algae that has now spread to 12 other lakes in the state. The infestation had spread to 250 acres before it was detected in 2015. Photo: Paul Middlestaedt for MPR News

Data show Minnesota's lakes are warming up — including Lake Superior, which has warmed 2 degrees every decade since 1980, Jensen said.

"That could allow species that couldn't survive here in the past, such as invasive emerging plants that would freeze off in the wintertime, that may allow them to colonize and then to spread," he said.

Scientists are trying to learn how these invaders spread so they have a better idea of how to stop them from hitching a ride from one lake to another.

"I think we have guesses of what might come," said Nick Phelps, director of the University of Minnesota's Aquatic Invasive Species Research Center, which is leading those efforts.

"The reality is though, there are countless species out there and many pathways in which they could arrive," he said. "Plugging all the holes is impossible. We just can't do it."

Eyes on the horizon

Phelps said researchers are working closely with the DNR, watershed districts and lake associations to teach people what other invaders to watch out for.

One of those invasives is hydrilla, a troublesome plant that crowds out its native counterparts. It has been spreading across southern and eastern states and has been found as close to Minnesota as Wisconsin and Iowa. 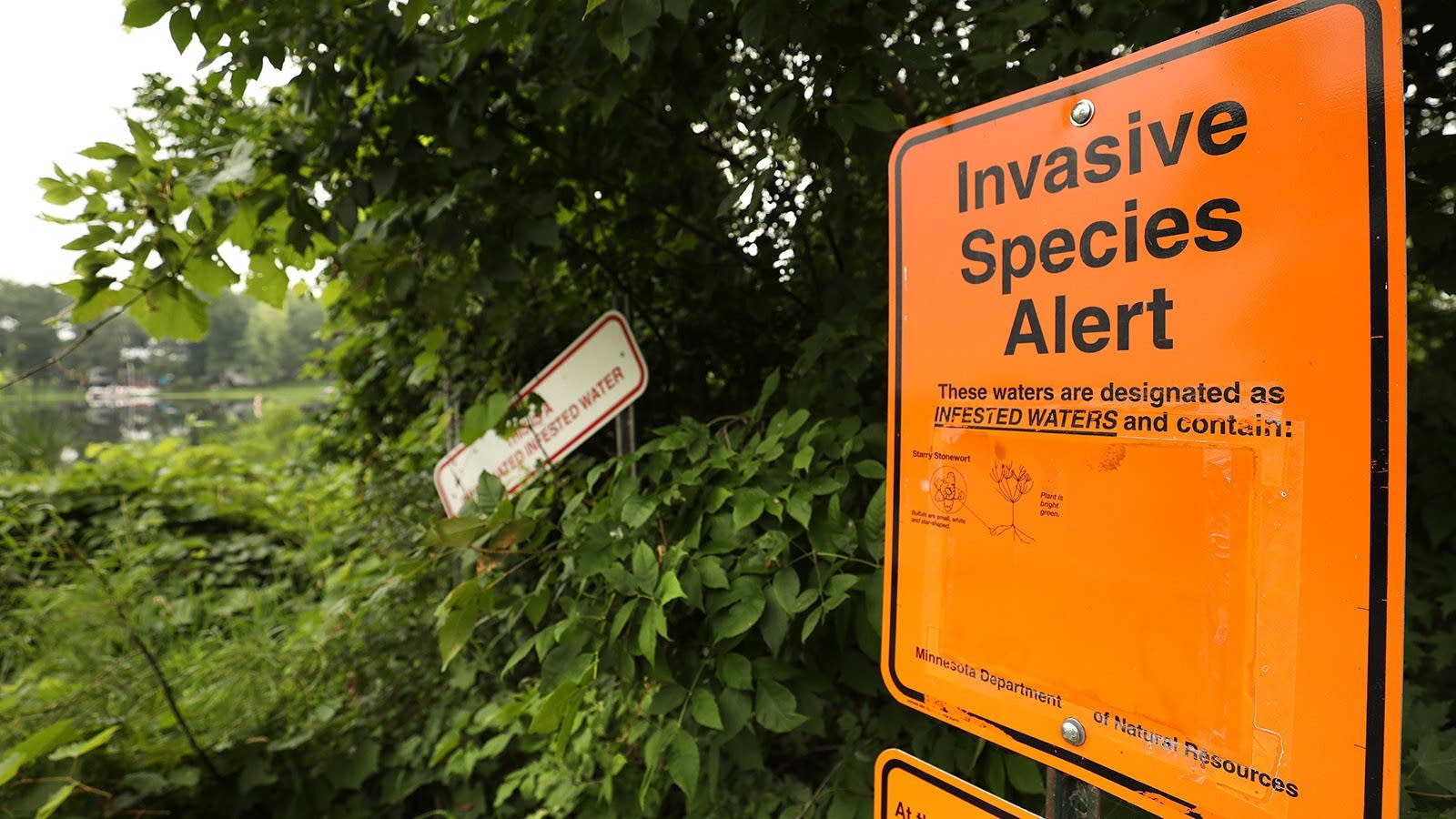 "We know that's on the doorstep. We know it's caused huge problems in other places," Phelps said. "We need people to know what that looks like, so it doesn't get missed like starry stonewort did for a while."

Starry stonewort may have been growing in Lake Koronis for years before it was detected. DNR staff missed its early signs, perhaps mistaking it for chara, a native species.

Earlier this month came a painful reminder of just how difficult stopping these invaders can be: The DNR confirmed that starry stonewort has spread to two more Minnesota water bodies — Medicine Lake in the Twin Cities and Pleasant Lake in Wright County.

And Cornell University researchers discovered two non-native zooplankton in Lake Erie. It was the first finding of a new invasive species in the Great Lakes in more than a decade, since the bloody red shrimp was discovered in Lake Michigan in 2006.

The DNR frequently notes that fewer than 7 percent of Minnesota lakes are infested with invasive species.

Invasive species have been identified in hundreds of waterways across Minnesota over the past few decades. The DNR adds a water body to its list of infested waters when it's confirmed to have one or more of 17 invasive species that could spread to other waters. Source: Minnesota Department of Natural Resources

And Wolf, the agency's aquatic invasive program supervisor, disputes the notion that their spread is inevitable, or that the battle isn't worth the money and effort. She said it's difficult to quantify the economic value of keeping an aquatic invader out of lakes and rivers.

"What are we not paying to get a new species? What are we saving right now by not having hydrilla in the state of Minnesota?" Wolf asked. "What you're preventing - what would that cost? I think that's a hard question to answer."

There are still thousands of Minnesota lakes that don't have any invasive species, Phelps adds.

"We can't throw in the towel on all of those just because some have been infested," he said. "Giving up now takes us out of the fight before we finished it. I think there's too much at stake. We're not giving up."

To hear an audio report of this story and take a quiz about invasive species, follow this link to the MPR website.  https://www.mprnews.org/story/2018/08/29/minnesota-lake-koronis-invaders-what-comes-next