Scenes from the author's journey, including the Kootenay River in Idaho.

At 5,525 miles, the United States-Canada border is the world’s longest land boundary, more than double the length of the United States-Mexico line. It passes through remote terrain arrayed with 8,000-foot peaks, millions of acres of wilderness and four of the five Great Lakes — a lot of it essentially unguarded.

With President Trump’s unrelenting focus on the Mexican border and all the dangers he says it poses for America, the nation’s northern boundary has remained mostly an afterthought — even though it is potentially more porous than the southern border. More unsettling, haphazard enforcement and surveillance efforts there have upended commerce with our No. 2 trading partner and have struggled to stop extremists, drug traffickers and illegal immigrants from entering the United States.

“The problem is that we don’t know what the threats and risk are because so much attention is given to the Southwest border,” Senator Heidi Heitkamp, a Democrat from North Dakota, told The New York Times in 2016. She was the author of a bill that required the Department of Homeland Security to develop a threat assessment for the northern border.

Last month, the department announced its latest strategy to secure the border. Its report says that the principal challenge is ending the illegal flow of drugs between Canada and the United States. But there are otherissues, like making it easier for people who live in cross-border communities to pass over the line, and speeding up the flow of trade and services — all while keeping up the country’s guard.

I spent the last three years traversing the northern border for a book about that so-called Hi-Line. The northland is a singular place, occupied by the sort of small towns that modern America has skipped over, obscure industries and old-world professions that rely on hands, not machines. It is also a wild place, with forests of old-growth hemlock, fir and birch; wild rivers; unnamed mountain ranges; and some of the largest roadless areas in America.

For much of my journey, it was difficult to discern where the border even was. I unintentionally crossed it dozens of times without seeing an agent or border monument. A French teenager jogging along a beach in British Columbia recently wasn’t so lucky. When she inadvertently crossed the unmarked border into the United States, she was detained for two weeks.

What I did see and hear were unhappy citizens on both sides of the line who said that the northern border’s “Mexicanization” — essentially, the American government’s mimicking of procedures it uses in the south — has resulted in congestion at ports of entry, invasive questioning at checkpoints, racial profiling and long delays, all of which that have changed life for the worse on both sides of the border.

Since the 18th century, when the northern border was first hastily sketched, the boundary has had the appearance of a scrawl. It divides more than a dozen American Indian tribes, and in Niagara Falls, N.Y., it cleaves North America’s most famous waterfall. Homes, businesses, golf courses and factories sit on the border. During Prohibition, taverns were built on the line so that Americans could be welcomed on one side and sold booze on the other.

Before the Sept. 11 attacks, half of the crossings between the United States and Canada were left unguarded at night. Since then, the Department of Homeland Security has increased the number of agents in the north by 500 percent and installed some of the same sensors, security cameras, military-grade radar and drones used on the United States-Mexico line.

The number of apprehensions along the northern border is relatively low compared with those along the southern line — about 3,000 in the 2017 fiscal year versus about 300,000 in the south.

Even so, every year, millions of dollars worth of smuggled drugs, including large quantities of opioids, like fentanyl, and an untold number of immigrants cross the border illegally into the United States. Motion sensors and cameras detect illicit crossers, some armed, in remote areas, but the agents can’t always get there in time to catch them.

Illicit drugs and illegal immigration are not the only concerns. A 2015 report by the Senate Committee on Homeland Security and Government Affairs said, “Some experts also believe that terrorists could exploit vulnerabilities along the northern border to carry out an attack on the U.S.” and noted that in 2011, Alan Bersin, a former commissioner of U.S. Customs and Border Protection, told the Senate Judiciary Committee that in terms of terrorism, “it’s commonly accepted that the more significant threat comes from the U.S.-Canada” border rather than the border with Mexico. 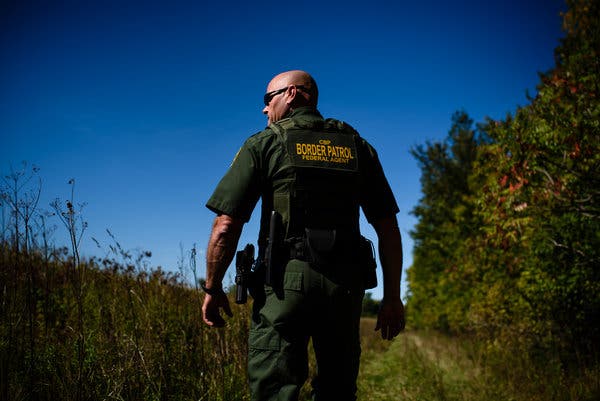 Today, according to the Department of Homeland Security report, the potential terror threats come “primarily from homegrown violent extremists in Canada” who are not on terrorist watch lists and thus can cross into the United States legally.

Beyond the terrorism threat, the government has the challenge of overseeing a border crossed every day by more than 400,000 people and $1.6 billion in goods through some 120 points of entry. According to a 2011 study by researchers at the University of Waterloo and Wilfrid Laurier University, increased secondary searches and unpredictable waiting times at the border were costing Americans and Canadians as much as $30 billion annually. Homeland Security has been working to minimize those waiting times.

Intensified security at border crossings also has disrupted centuries-old international communities that straddle the line. Two centuries of intermarrying among French, Acadian, Indian, German, Scottish and Dutch people created families and communities that span the border. After decades of being able to cross the line at will, families, Native Americans, members of church congregations, and employees at hospitals and small businesses now find themselves confronted with a sometimes impassable and, occasionally hostile, barrier.

In the coming months, Homeland Security will begin to put in place its border management plan, which calls for enhanced border security while also doing a better job of facilitating cross-border trade and travel. Some of the actions proposed to achieved those ends have been suggested before, with little follow-through.

This time, perhaps, our border to the north will get the attention and resources it needs.

Porter Fox is the author of “Northland: A 4,000-Mile Journey Along America’s Forgotten Border.”