An aerial image of Kenora Fire 71, which has grown to 2,000 hectares since its discovery July 15 near the Manitoba border. The fire is located 33 kilometres north of Wabaseemoong and approximately 80 kilometres northwest of Kenora. (Ontario Ministry of Natural Resources and Forestry)

Firefighters from across Canada, and abroad are arriving to help battle blazes in northwestern Ontario, while 30 crews from that region remain in the province's northeast working on fires there.

Monday was the busiest of the season thus far with 31 new fires starting, mainly in the Red Lake and Kenora Districts where numerous fires are already being fought, said officials with the Ministry of Natural Resources and Forestry, who added that firefighters from Alberta, the United States and Mexico are enroute to offer their assistance.

Kenora Fire 71, discovered near the Manitoba border on Sunday, has grown quickly to 2,000 hectares, said ministry officials, adding that on Monday, more than 20 wildland firefighters from Saskatchewan were briefed and sent to work on the spreading fire.  It is located about 33 kilometres north of Wabaseemong First Nation and about 80 kilometres northwest of Kenora.

Winds are also bringing heavy smoke to the doorsteps of many residents in the Kenora area. 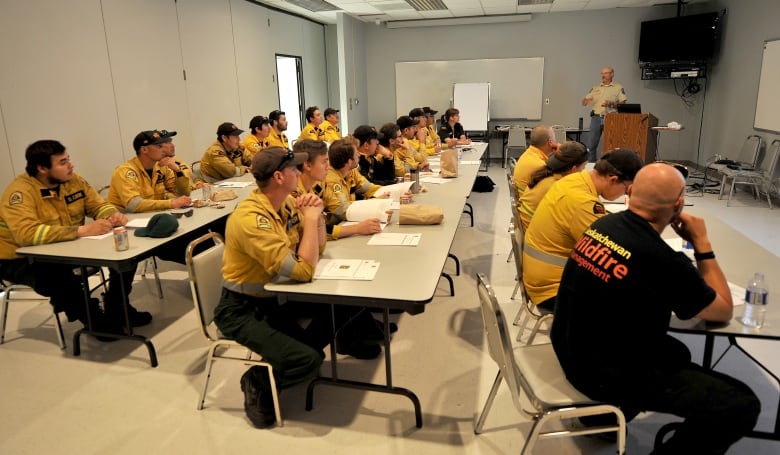 Over 20 wildland firefighters from Saskatchewan are briefed at Northwest Region Headquarters, July 16, before being deployed to Kenora Fire 71. (Ontario Ministry of Natural Resources and Forestry)

The ministry said an ignition team has been sent to Red Lake Fire 70, located near the western boundary of Woodland Caribou Provincial Park, to try to bring the 1400 hectare fire to natural boundaries.

Fire rangers were placing sprinkler units on various outpost cabins throughout the area of the fire.

The forest fire hazard is currently high in the Kenora and Dryden Districts, while moderate conditions prevail in the Fort Frances, Thunder Bay and southern portions of the Red Lake and Sioux Lookout Districts.

Nipigon District varies from moderate to high along the north shore and low hazards conditions across the far north.