Equipment for a solar radiation-monitoring site for NASA is being set up at Granite Island. Instruments being installed at the site will measure things like clouds and radiation to help NASA validate its satellite data. (Journal photo by Christie Bleck)

An offshore solar radiation-monitoring site for NASA’s Clouds and the Earth’s Radiant Energy System experiment is being set up this week at Granite Island Light Station by a NASA contractor, Science Systems and Applications Inc. of Hampton, Virginia.

Northern Michigan University trustee and alumnus Scott Holman agreed to host the NASA instruments on the island, which he owns, provided NMU faculty and students could be involved in the research.

John Lenters, NMU research associate and owner of Lentic Environmental Services, based in Lake Tomahawk, Wisconsin, said NASA CERES has been measuring Earth’s radiation via satellite for more than 30 years.

To validate that data through ground measures — preferably over water far from land contamination — NASA looked to a Lake Superior location after a previous East Coast site had to be decommissioned because of safety reasons. 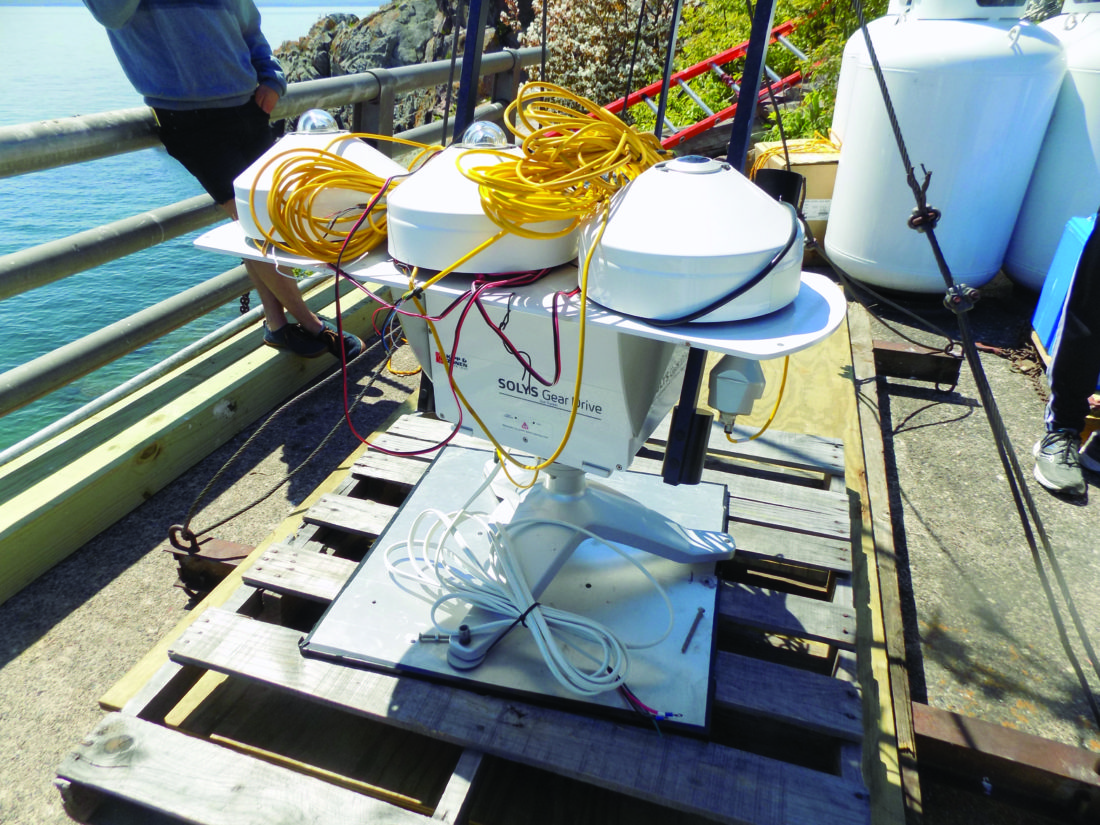 Equipment for a solar radiation-monitoring site for NASA is being set up at Granite Island. Instruments being installed at the site will measure things like clouds and radiation to help NASA validate its satellite data. (Journal photo by Christie Bleck)

Granite Island was chosen based on its available infrastructure, power and internet. The potential added benefit of weather monitoring equipment that had been installed at the island previously as part of the Great Lakes Evaporation Network also appealed to NASA, Lenters said.

Granite Island is about 6 to 7 miles offshore from Marquette, he said.

Bryan Fabbri, a research scientist for SSAI, said the goal is that whatever the satellites are measuring from space will match what is being measured at the ground surface.

Since the earth is 75 percent water, if measurements are correct in space, then they’ll be considered correct over 75 percent of the planet.

“So they call this a ‘ground truth’ site,” Fabbri said.

The instruments being installed at Granite Island will measure clouds, sunshine, radiation and aerosols — small particles that reflect and block sunlight — to help NASA validate its satellite data, Lenters said.

CERES focuses on understanding how much energy is coming into and out of Earth.

“A lot of that’s determined by clouds, aerosols and the sun itself,” Lenters said. “They have a number of sites around the world that are used to help validate satellite measurements, and that’s what we’re doing out at Granite Island.”

Lentic Environmental Services launched a Granite Island Living Laboratory program in cooperation with the Superior Watershed Partnership to enrich large-lake research, along with training and education opportunities for NMU and external collaborators throughout the Great Lakes region and beyond. Lenters accompanied NASA representatives to Granite Island with Holman in the summer of 2017, spending the past few months finalizing access agreements.

Lenters said NASA is looking for a reliable, long-term CERES and Baseline Surface Radiation Network site. If Granite Island proves effective, it could be an extended collaboration between NMU and NASA.

What are the practical uses of the Granite Island monitoring site?

“All the energy that comes from sun and the sky is basically what drives our weather and climate, and that affects things like heat coming off the earth’s surface that drives winds, evaporation, water coming off Lake Superior,” Lenters said. “We have a Great Lakes Evaporation Network site out at Granite Island and Stannard Rock, so this will help contribute to that information as well.”

Before a Thursday trip to Granite Island, several trips were made to drop off about 3,500 pounds of gear, with installation to begin today and continue through the weekend, he said.

Lenters noted the equipment will be at Granite Island indefinitely as part of a long-term project for making climate measurements.

“One of the things we’ve found from these radiation measurement sites around the world over decades and decades is that there’s a lot of variability in how much light comes from the sun based on changes in cloud cover and aerosols, and it modifies global warming, for example,”Lenters said. “So, we’ve had periods of more rapid global warming and weaker global warming because of the effects of clouds and sunshine, and so we expect this site to contribute to our understanding of how sunlight changes our perspective on climate change.”

Matt Millado, a Marquette native and a sophomore at the University of Notre Dame, went along to assist during a Thursday trip to Granite Island.

“My interests are just broadly ecological research and just taking any opportunity I can to explore the field — and get out on the lake, of course,” Millado said.

Holman helped with transporting the crew to Granite Island via boat.

“My interests are making sure that our students at Northern have access to the data and have the ability to make their own projects and their own research with the data that’s being collected,” Holman said.