A new sewage treatment plant in Red Rock, Ont., east of Thunder Bay, could play a role in delisting a former pollution hotspot in Nipigon Bay from a bilateral program to tackle historical pollution. (redrocktownship.com)

A recent funding announcement for a new sewage treatment plant in a Lake Superior north shore township could have wider implications on long-standing efforts to remove a nearby body of water from a bilateral list of pollution hotspots.

A 2015 report by the remedial action plan group focusing its efforts on the north shore of Lake Superior recommended delisting Nipigon Bay from the list of the Great Lakes areas of concern. The areas are bodies of water identified and slated for cleanup as part of efforts by Canada and the United States that began in the 1980s

While a lot of progress has been made over the previous three decades in cleaning up Nipigon Bay and the nearby Nipigon River, action plan coordinator Jim Bailey said the lack of a new treatment plant in Red Rock was one item on the remedial plan's original list that hadn't been completed.

"It's something that had been outstanding, [residents] wanted this plant for a long time," Bailey said.

"Some residents there were really reluctant about Nipigon Bay being delisted in the absence of this treatment plant for Red Rock," he continued. "So I'm hoping that once this plant is built, people will be more supportive of removing Nipigon Bay as one of the so-called areas of concern around the Great Lakes." 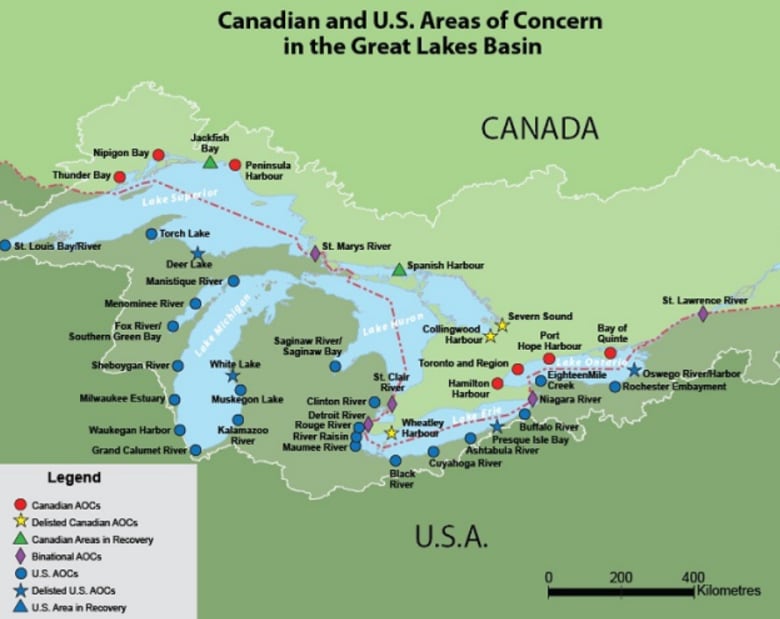 There are four main areas of concern in northwestern Ontario. (Environment and Climate Change Canada)

The 2015 report that recommended delisting pointed to a number of cleanup efforts over the years, including upgrades to the sewage plant in Nipigon, a water level plan in the Nipigon River and removing garbage and debris from Clearwater Creek.

The final call on whether to delist a site rests with Environment and Climate Change Canada, according to Bailey and the International Joint Commission.

"I think it definitely brings us closer to completing the entire plan," Bailey said.

Support for removing Nipigon Bay as an area of concern is also coming from the bilateral, Canada-U.S. body set up to manage cross-border water issues, and, in the case of the Great Lakes areas of concern, provide advice and recommendations.

The same review that made that determination also pointed out that upgrading the Red Rock treatment plant wasn't entirely necessary for delisting the way it had once thought to have been, he continued — other cleanup efforts had "led to improvements," — but a new plant was still effectively tied into the delisting process due to the original remediation terms.

Delisting a site removes a lot of negative stigma surrounding effects of historical pollution in a given area, he said, and, although it can also close off some pots of money earmarked for environmental remediation, the area ultimately benefits in other ways.

"There's some evidence to suggest that there is economic investments that come with that destigmatization of an area of concern," Child said.

A spokesperson for Environment and Climate Change Canada said that environmental remediation targets have been met without the new treatment plant, although the funding commitment is "good news." The federal department added that it is considering delisting Nipigon Bay but a final decision has not yet been made.