Robert Monty (right) and his buddy Gilbert Grandbois (left) admire a walleye that was caught and released by Monty on March 10, 2018. (photo credit: Donnalee Monty/Facebook )

A potentially record-breaking walleye got the break of its life last weekend.

On March 10, Robert Monty of Dryden, Ont., caught and released a giant walleye that he said was record-book calibre. The experienced angler had no idea when he started on the water near the northwestern Ontario city that day, it would end with such a bang.

"We went for crappies in the morning," said Monty. "We never had too much luck, so we headed her back to the walleye spot."Monty was fishing with his wife Donnalee, his friend Gilbert Grandbois and Grandbois' partner, Sheila Sjodin.
Monty said the spot they fish is near a creek mouth and is known to hold walleye in March. He said the walleye fishing is usually best in the evening.

"We got there about 3 o'clock," Monty said of their hot spot. "It was about eight feet of water, and we set up our lines."

He added that when the sun started "heading down the trees," he began to work his two jigging rods. Both were baited with a jig and a minnow. Monty said he had just left one hole and was going to another one when Sheila cried "Robert, you've got a fish!"

The angler then grabbed the rod and set the hook. "It ran about two or three times on me," Monty said. "My friend was looking at me and I said 'I think we have something big here.'"

Monty said he could hear the eight pound test line rubbing on the ice and feared a break-off. "I said 'I can't get his head up,'" he said.

That's when Monty said he realized this was no normal walleye. Grandbois quickly came to help. He grabbed the fishing line as Monty battled the fish just under the hole with his short jigging rod. 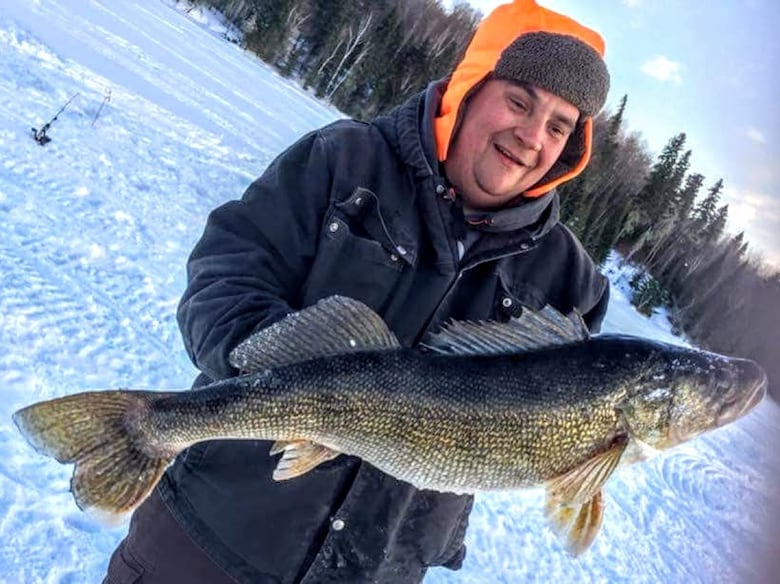 Robert Monty of Dryden, Ont., says his eyes "popped out" when he saw this giant walleye come through the ice hole on March 10, 2018. (photo credit: Donnalee Monty/Facebook)

The walleye's head slipped into the hole and filled it, Monty said, adding that Grandbois then leaned down and barely got two fingers in the gill plate.

When the giant walleye was pulled out of the hole "my eyes popped out," said Monty, adding that the fish measured 36 inches (91 centimetres) in length from nose to tail.

He said he didn't measure the girth but it was one very fat walleye.

Monty said after a few pictures were taken, he released the fish back down the hole.

According to the Ontario Federation of Anglers and Hunters fishing registry, the present Ontario record walleye is 36.5 inches long (almost 93 centimetres) and had a girth of 21 inches (53 centimetres).

Monty, who said he guided walleye anglers for many years on the English River system in northwestern Ontario, said until last Saturday, his personal best walleye was 30 inches (76 centimetres).

Despite the rarity of his catch, Monty said he has no regrets about releasing the walleye and does not plan to get a replica made.

"Just a picture and a memory," he said. "There's always a bigger one out there. But that's my biggest."

Follow this link to listen to a report about the big fish on CBC Radio.