Freeman’s return from the wilderness in Sierra magazine. In late September 2015, Amy and Dave Freeman embarked on a dream excursion to spend 365 days in Minnesota’s Boundary Waters Canoe Area Wilderness. Part of their trip was included in Conor Mihell’s “Borderline Wilderness” in the November/December 2016 issue of Sierra. The Freemans hoped to draw attention to the threat posed to America’s most popular federal wilderness by proposed copper and nickel mines on its outskirts; late last year, the Trump administration quietly renewed leases owned by a Chilean mining company, a principal for which happened to be Jared Kushner and Ivanka Trump’s landlord.

This selection comes from the end of their new book, A Year in the Wilderness, after the Freemans had completed their year in the Boundary Waters. 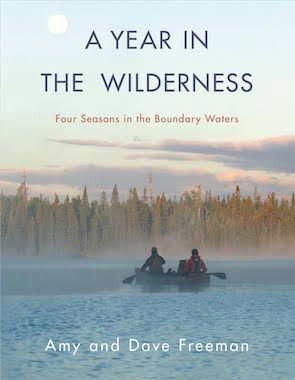 The night after exiting the Boundary Waters, we found ourselves enclosed by four walls, lying in a bed, staring at the ceiling. How could anyone sleep like this? The hum of a dehumidifier—what one typically thinks of as innocuous white noise—was jarring and foreign, and it set us on edge. Not able to hear the wind, we worried about the canoe we had left on the beach. Only after securing the canoe and opening the window, letting in a gentle breeze and the sound of rustling leaves, did we finally drift off to sleep.

Within 72 hours we had boarded an airplane bound for Washington, D.C., to advocate for the Boundary Waters in a different way, meeting face to face with our elected officials. Moving through the air at five hundred miles per hour was mind-boggling in comparison to the pace we had become accustomed to in our canoe.

Many trips by car and plane followed over the next six months. We gave dozens of presentations in seven states. Almost every time someone asked, “What’s it like to be back in society?” Or, “How are you adjusting?” Our typical answer—“It’s been kind of tough, but we’re used to it now”—doesn’t begin to address how challenging the readjustment had been for us. We took to calling it recompression, because it is the polar opposite of decompression—what most people experience when they visit the Boundary Waters. As we recompressed we were affected in ways we hadn’t anticipated. The biggest challenge, as on that first night, was getting used to falling asleep inside. Our internal clocks were confused by artificial light, and our bodies had adapted to the routine of the trail, our senses so attuned to the woods that sleeping indoors felt unnatural. It took several weeks for us to grow accustomed to being cut off from the sounds of wind rustling in the trees and water lapping against the shore—and no longer smelling freshly fallen pine needles in the duff or the onset of rain.

Follow this link to read their entire article on Sierra.com.